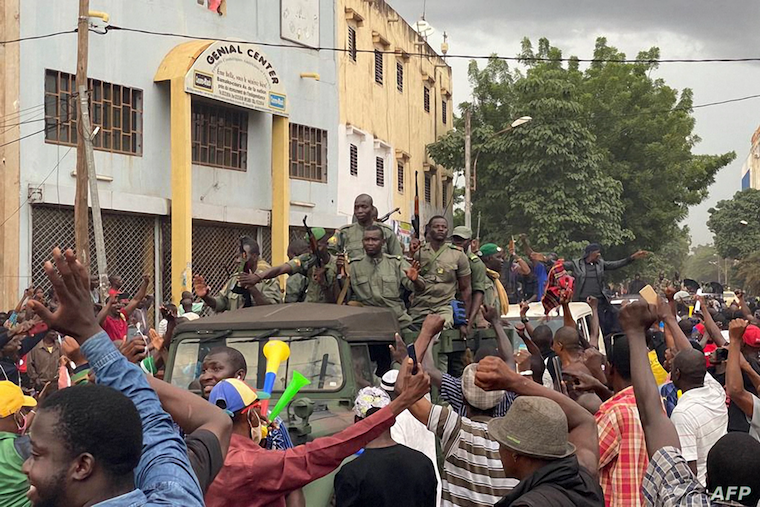 An estimated 3,000 Malians marched Wednesday through the streets of Bamako on the country's day of independence from France.

Protesters, many of whom were against what they perceive as "foreign meddling," marched in support of the military government, as Colonel Assimi Goita, Mali's interim president, faced pressure from Western governments to cancel a deal with Russian security firm Wagner.

Over the past week, Paris in particular has expressed concern over a reported deal between Bamako and Moscow to hire 1,000 mercenaries.

"Such a choice would be one of isolation," French Defense Minister Florence Parly said Monday during a visit to Mali.

Germany and the European Union have also expressed concern about the deal. But demonstrators throughout the country Wednesday seemed to support the deal, with some carrying Russian flags in addition to Malian flags and pro-military placards, Agence France-Presse reported.

France, the country's former colonial ruler, has thousands of troops in Mali to help fight a jihadist resurgence throughout the country. But many in Mali consider the mission a failure, and protests against the French military presence have taken place before.

In addition to their worries about the deal with Russia, many Western powers and Malian neighbors have expressed concern that the military government may fail to hold elections early next year as promised.

Goita and his military government took power in a coup in May, just months after new leadership had been chosen. Goita, who also led a coup that overthrew the elected government last October, said the transitional government had violated an agreement to advise him on a cabinet reshuffle

The genuineness of the elections and whether they reflect the people’s will is not important.

They are quick to threaten intervention when a sitting government is kicked out of power forcefully but pay lip service when dictators hold sham elections and kill and maim a lot of people in the process.

No one wants a coup but when all legitimate avenues have been closed by those who are benefiting from the status quo, coups are as good as elections.
Report to administrator
+1 #2 kabayekka 2021-09-26 13:34
Ak Mukasa you have a good point. But whether it is Russian men or French men, all these have got their parents too.

They are children of those various countries sent out in an African war zone. What are they brought to die for in Africa?

One reckons jihadists are also a colonial force trying hard to establish itself in Africa. Because Africa and its people do not have their own ideology on which to fight and die for.

The creator gave the Africans their tropical countries to live in and to look after. Why do you always want somebody else to come and dictate to you differently?
Report to administrator
+1 #3 kabayekka 2021-09-26 13:48
Since decolonization in Africa, the African military is no good either.

All the nasty African military regimes that have taken over the responsibility to lead the people of Africa have come out worse than when Africa was under colonial rule.

It is worse when brothers and sisters are arresting and shooting their true relatives on this continent. And the African Union and the UN are all sitting on the fence keeping quiet as innocent spectators! Shame on you!
Report to administrator
0 #4 Lakwena 2021-09-27 13:46
Quoting kabayekka:

... All the nasty African military regimes that have taken over the responsibility to lead the people of Africa have come out worse than when Africa was under colonial rule.

It is worse when brothers and sisters are arresting and shooting their true relatives on this continent. And the African Union ... sitting on the fence keeping quiet as innocent spectators! Shame on you!

Kabayekka, the sadism in the African Military Dictatorship is that: these Generals sic soldiers commit abomination by slaughtering their fellow countrymen women, children, destroy properties, pat themselves on the back and promote themselves into Field Marshal, Generals, Brigadiers Colonels, etc., etc.

In other words, there are no Generals in Africa but celebrated criminals against humanity. E.g., there is no difference between Bloody Gen Tibuhaburwa and Bloody Gen Joseph Kony?
Report to administrator