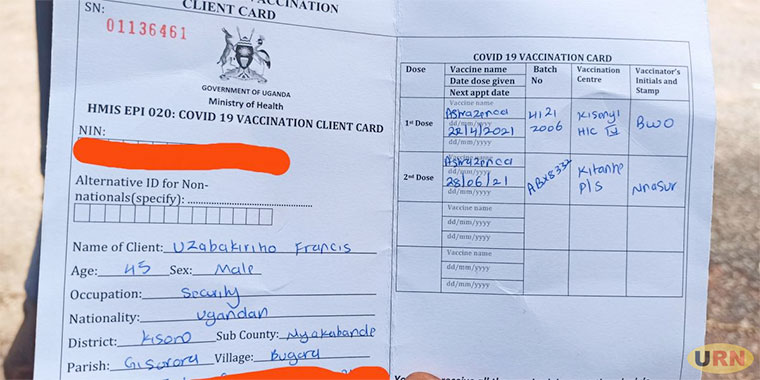 On 22 April, Francis Uzabakiriho, a security guard at Kampala Junior Academy received his first Covid-19 jab when a team of health workers from Kisenyi health center IV were invited to the school to vaccinate members of staff.

After he was vaccinated, Uzabakiriho was issued a ministry of Health vaccination card which had details on when he should get his second jab, and what type of vaccine he had been injected with. Two months later on June 28, Uzabakiriho went to Kitante primary school, for his second jab.

According to Uzabakiriho, while his details were being entered into the KCCA vaccination database, it was discovered that someone else had been registered using his national identification number (NIN), telephone number and village details. A nurse then issued him a second card, transferred his details and asked him to go to the data entrant.

However, when he approached the data entrant, he was told to pay Shs 20,000 before his new details could be captured and card stamped as proof that he had been vaccinated. Uzabakiriho is not alone. Another source who preferred to remain anonymous told URN that he was asked to pay for a vaccination certificate.

"After my second injection, I was told to go to Kisenyi and pick my certificate. I was told that I would have to pay Shs 20,000 for it," the source said.

When contacted, Emmanuel Mayombwe, the data entrant attached to Kisenyi hospital said that Uzabakiriho was asked to pay some money so that his papers could be easily fast-tracked.

"Francis came and had a problem. His particulars had been assigned to someone else at the school. This person was his boss and we didn't want to cause chaos so, I told him to give me some money to facilitate me so that I can enter his particulars quickly into the system. Normally, it can take a process for this data to enter into the system but I was going to fast track it if he paid," Mayombwe said.

When URN entered Uzabakiriho's detail into the online portal that issues certificates, a pop-up message showing 'request failed with status code 500', was displayed. This means that Uzabakiriho's vaccination status is unknown. More than two months after Uzabakiriho got his second jab, his details have not yet been entered into the system.

Dr Daniel Okello, the KCCA director of public health, the office which oversees the vaccination of persons within Kampala says he has not heard of such claims taking place.

"I am not aware of this, because you actually can't ask for money because your entry can't be done anywhere. It can't only be done from one place so it defeats the purpose and in most cases, the people who vaccinate are not the ones who do the entry," Okello said.

Ministry of Health senior public relations officer, Emmanuel Ainebyoona says that the acts of persons like Mayombwe are illegal. He says vaccination is free of charge and persons should not be made to pay for the services. He said the Health ministry is working with the State House health monitoring unit to investigate fraud in the vaccination exercise.

According to the Health ministry, all vaccination-related activities are free of charge and people should not be asked to pay for them. Ainebyoona says that all complaints should be made using the ministry's toll-free line; 0800-100-066.

He says complaints like this will be forwarded to the health monitoring unit. So far, the unit has carried out investigations into fake vaccines and private health clinics selling ministry of Health vaccination cards.

He should have made his complaints as soon as possible to the rightful medical authority so that this minor problem could be solved amicably.

That is what we keep telling this government of Uganda about politicizing or commercializing the illness of COVID19. It is bad enough to arrest, shot and kill people to protect them from getting the COVID19.

It seems that most Uganda people are so used to paying for government services all over the place, and they cannot believe that the Ugandan hospitals are immunizing the public free of charge!
Report to administrator
+1 #3 Akot 2021-09-25 14:50
Quoting Uncle Philosopher:

Everything thing in this system is rotten. Signs of a system malfunction. From head to the top.

Pathetic, UN conference is ground for shitholes rulers to ensure they get their share of money as thank you for starving, oppressing...populations!

Worst, UN/developed aren't concerned about drama, evil going on in shitholes, but they are happy at UN meeting, while ignoring reality of situation in shitholes!
Report to administrator