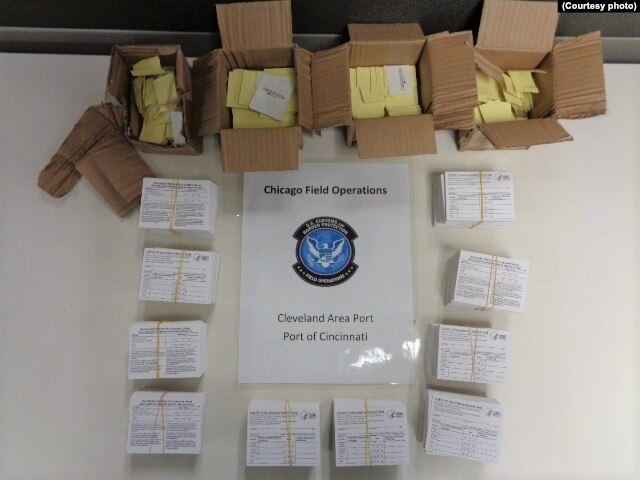 Some of the impounded fake vaccination cards

As more businesses, universities, and federal and local governments demand proof of inoculation against COVID-19, the black market for fake vaccine cards appears to be booming.

In August, a Chicago pharmacist was arrested after being accused of selling dozens of authentic Centers for Disease Control and Prevention (CDC) COVID-19 vaccination cards on eBay. In July, a naturopathic physician in Northern California was arrested for allegedly selling fake COVID-19 immunization treatments and forged vaccination cards.

'A type of fraud'

“It's a type of fraud,” says Wesley Oliver, professor of law at Duquesne University in Pittsburgh, Pennsylvania. “There's another theory that you are stealing from the government their insignia and their imprimatur that you are in fact vaccinated, and both are just sort of different styles of the same crime.”

US President Joe Biden recently called on all businesses with 100 or more employees to require their workers either be vaccinated or tested for COVID-19 once a week. A global cybersecurity company reports that the price of fake vaccine cards and the numbers of people selling them shot up since Biden announced the vaccine mandate in early September.

Pretending to be vaccinated trespasses on other people’s rights, according to Boston University law professor Christopher Robertson.

“Part of the free enterprise system is we decide where we want to go, and who we want to interact with and on what terms. And so, it really is an invasion of everyone else's bodily integrity, their security, and knowing that they can be safe going into a place that's requiring proof of vaccination,” Robertson says. “It's kind of similar to battery in exposing someone to risk that they didn't consent to be exposed to.”

Exposing others to risk

Last month, 15 people in New York were charged in connection with selling and buying phony COVID-19 vaccine cards. A woman who called herself @AntiVaxMomma on Instagram stands accused of selling 250 fake vaccination certificates for about $200 per card.

A second suspect, a 27-year-old medical clinic worker, allegedly charged an extra $250 to enter fake vaccine data for at least 10 people into New York’s immunization database. Front-line health care and essential workers are among the people accused of buying the phony cards.

The idea of health care workers falsifying their vaccination status terrifies cancer patient Diana Martinez, who lives in California. She is one of millions of Americans with an impaired immune system, which makes it harder for her body to fight off disease.

She dreads the thought of getting on an elevator with an unmasked, unvaccinated person.

“They don't understand how they look to me. It’s like someone has jumped on with a loaded gun,” Martinez says. “Those few moments when I'm just trying to get up to my doctor's floor, they may have infected me. They may have ended my life because my immune system is so compromised that I'm more vulnerable to whatever they might be spreading.”

Martinez could be especially vulnerable because the COVID-19 vaccines may not be as effective in people with suppressed immune systems. For example, Martinez’s physician finds that patients with multiple myeloma, a type of blood cancer, don’t respond as well as healthy people do to mRNA vaccines, like the ones produced by Pfizer and Moderna.

“We found that in the patients who got the vaccination, that 45% had a normal response, 22% had an impaired response, and 33% had no response,” says Dr. James Berenson, founder and president of the Institute for Myeloma and Bone Cancer Research in West Hollywood, California.

Berenson adds that the list of people with compromised immune systems include “older folks, those who are on immunosuppressive therapies like patients with lupus, rheumatoid arthritis, Crohn's disease, ulcerative colitis, psoriatic arthritis, people on therapies that are trying to tamp down the immune system.”

When it comes to suspects charged with buying and selling phony vaccination certificates, the judges are certain to look at who was harmed by the alleged crime, according to Oliver.

“Basically, people are buying the right to take a risk with other people's lives. That's not something that we typically see in criminal law,” Oliver says. “The real harm that you've done is create a risk to the population. And with most crimes, the degree of harm that you create, or the risk of physical harm, is part of the sentencing scheme.”

Which could mean that health care workers, or those who work in nursing homes, involved in the buying or selling of forged vaccine cards could face worse penalties.

“The more people you put at risk, the more vulnerable the population put at risk, clearly, the more harshly you're going to be sentenced,” Oliver says.

The integrity of the entire vaccination card system is at stake, Robertson says.

“It’s similar to forging money. If half of all the currency in circulation was actually fake, then nobody could trust the currency at all,” he says. “When we do detect it, we really have to drop the hammer and make that deterrent signal clear to the public, that we're not messing around, that lives are at stake.”

Judges have wide latitude when it comes to sentencing. When making their decision, they consider both physical and financial harm caused by the perpetrator, according to Oliver. He estimates that if convicted, vaccine card fakers could face anywhere from probation to up to 20 years in prison.

Berenson hopes judges will deliver harsh punishments that encourage people in the broader community to look beyond themselves and focus on the big picture.

“We're all in this together. It’s not about you — it's about the bigger good. You need to think about the bigger good,” the cancer physician says. “So, if you get vaccinated, we can get rid of this. And if you actually wear a mask and socially distance, there's no place for the virus to go. If you don't, this is going to go on and on and on for years.”

+1 #1 Sekabaka 2021-09-24 20:53
Sssshhhhhhh, quiet!!!
Kyagulanyi will be disappointed in this because according to him, these things only happen in Uganda.
Report to administrator