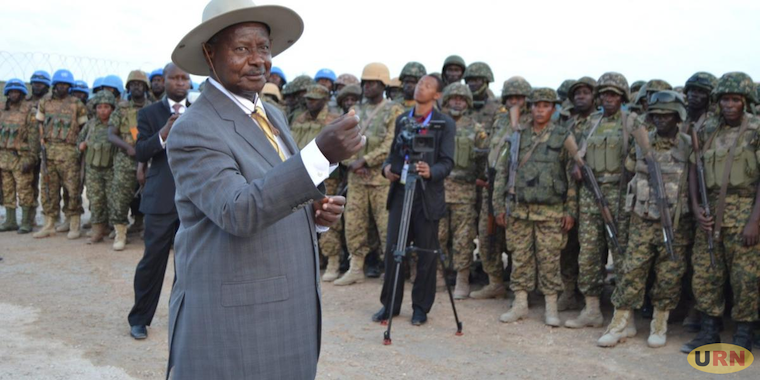 After the 9/11 al-Qaeda attack on New York that killed almost 3,000 people, then US president George W Bush launched the 'freedom agenda', a program he hoped would be critical in promoting democracy as an alternative to tyranny across the globe.

The freedom agenda targeted those who had been in power for more than 15 years, a category Uganda President Yoweri Museveni belonged to. And in the context of Uganda, democratization meant that Museveni would leave power in 2006 after his second term as per the constitution.

Helen Epstein wrote in her book; Another Fine Mess: Uganda, America and The War on Terror that the freedom agenda emboldened the state department officials. Thinking they had White House backing, officials such as ambassadors started telling long-serving strongmen around the world that it was time up.

But Bush quickly found that he needed allies beyond NATO to win the anti-terror wars he had started in Afghanistan and Iraq. Thus, he started building a larger alliance, turning to the likes of Museveni.

Museveni flew to Washington in June 2003 for talks with Bush. The US president was meeting a man who had already showed willingness to join the anti-terrorism coalition. Epstein wrote that Bush asked then US ambassador to Uganda Jimmy Kolker what to tell Museveni.

“I know how much you like your cattle,” Epstein quotes Kolker recollecting what Bush ended up telling Museveni.

The next month (July 2003), Bush visited Uganda on his five-state Africa tour. During his eight years as president, Bush met Museveni six times. But since his departure, Museveni has only met a US president once: Barrack Obama in 2014.

As Bush hunted for allies, he put brakes on implementing the 'freedom agenda.' In a recent interview, Epstein said given that Museveni had made a secret deal with Bush administration to send troops in Somalia (which happened in 2007 a year after the Uganda 2006 presidential election), he suddenly became an asset to the US.

"Museveni at that time had a secret side deal with the Bush administration to send in peacekeepers into Somalia. In fact, that was probably the main reason why the policy towards Uganda changed. Essentially once the Bush administration had secured Museveni's promise to supply peacekeeping troops in Somalia then the pressure to step down in favour of promoting democracy in the country would not be enforced." said Epstein.

As discussions of deleting the term limit clause from the Constitution that would have stopped Museveni from contesting again gained momentum in 2005, Epstein wrote, Kolker and then UK High Commissioner to Uganda Adam Wood visited Museveni at his Rwakitura home and offered him a deal: “Retire from office in 2006, and we’ll help you find you lucrative work as a UN negotiator. The ambassadors also offered to help arrange a deal so that Museveni would not be prosecuted for any acts committed in office.”

Museveni looked distracted as the ambassadors presented their retirement 'offer', Epstein wrote. "And when they were done talking, Epstein quotes Kolker saying “he just dismissed us like flies.”

Unaware that Museveni had made a secret deal with Museveni, Epstein said the ambassadors felt that sanctions would be imposed on Museveni if he did not leave power.

"After 9/11 George W. Bush briefly launched something called the freedom agenda whereby, you know, recognizing that repression in Middle East countries, for example, could be fuelling terrorist rage. He decided that he would try to pressure dictators that America had been supporting for years including Museveni to step aside and allow democratic competition in their countries. Ambassadors at the time with the UK ambassador during a short of brief period, the freedom agenda did try to urge Museveni to step aside and also really thought that they had Washington at their back and sanctions would be imposed if he didn't," Epstein added.

As early as 2004, the US was in the hunt for more manpower of private security personnel. Uganda was at hand to offer the manpower. This resulted into an explosion of private security companies that were recruiting and exporting security guards to Iraq. Asker Security Service was the first company to export guards to Iraq in late 2005, but its official were unwilling to be interviewed.

Adokorach Unyama was recruited and deployed in Iraq by Triple Canopy company in 2007 as a security guard. She came back for vacation in 2018 hoping to go back but it didn’t go as planned. She ended up staying in Uganda and joining politics in Nwoya district.

Adokorach said in an interview with URN that she enjoyed her time working with the Americans. She was earning Shs 1.5 million per month.

“It was good money. When I came back, I found I had more than Shs 20 million on my account,” Adokorach said.

She bought land where she is now residing and invested about 5 million in a microfinance which later collapsed because of mismanagement, losing the investment. These private guards formed the first line of defence at American military bases as well as other installations.

“My job was security, protecting their life and property,” she says.

Adokorach didn’t fear because she knew it was a golden opportunity to earn good money. She says the Americans did not segregate them.

“We were eating from the same hall. Americans did not segregate whether your black or not,” Adokorach says. “The same food Americans were eating is what we were also eating. They were taking care of us because our responsibility was to take care of them.”

“We have reduced the unemployment burden of this country,” he argued. “These people who work in the Middle East don’t spend money there. They send it home. This comes in as direct foreign earnings.”

Uganda soldiers were deployed in Somalia in March 2007 to battle al-Shabaab as part of the Africa Union Mission to Somalia (AMISOM). Since then, they have been part of the force protecting Somalia civilian government.

Given that regular soldiers deployed in Somalia earn a quadruple of what they would be earning in Uganda, it has been viewed golden opportunity. The deployment has also been seen as a retirement package. Many regular soldiers after serving in Somalia are retired.

The man knows in his bone marrow that he is nothing but an opportunistic scarecrow rattling in the wind; a useless grinding skull under a bloody rag scaring Ugandans to death.

Wachireba?
Report to administrator
-1 #4 Wainanchi 2021-09-22 13:51
Observer you are idlying and wasting our time as your readers and inflaming thugs to jump on and give their futile and funny comments