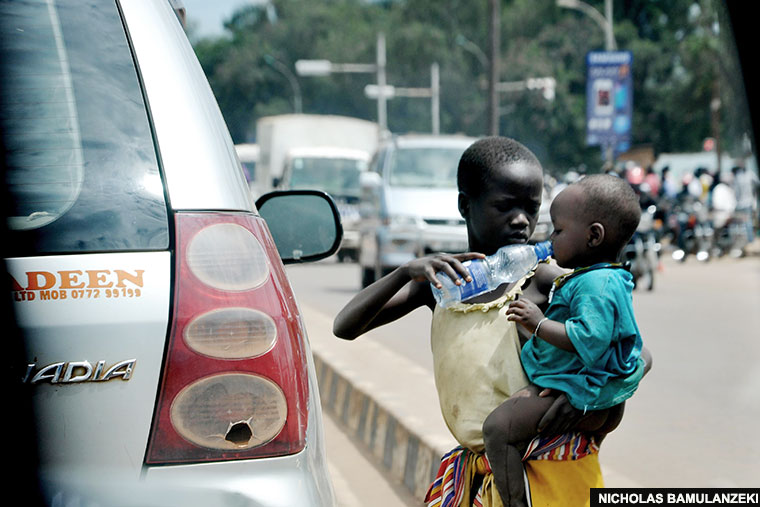 In a taxi along Bombo road in the traffic jam, a child comes to a passenger’s window asking for money.

“Auntie, kikumi” she says, looking piteous and dirty. The passenger pulls out a pack of sugarcane from her handbag and offers it to the little girl, about eight years old. Surprisingly, the girl declines the peeled sugarcane and insists on the kikumi (Shs 100).

The passenger then offers to take her home, but kikumi is the only response she gets. When she refuses to give the child money, the girl pinches her so hard, she leaves a wound on her forearm.

She is one of the hundreds – could be thousands – of Karimojong children that have swarmed Kampala capital city and its busy suburbs, aggressively begging at traffic lights and during rush hour hold-ups.

Last week The Observer visited parts of Kampala, to try and make sense of where these children come from. In 2019, the ministry of Gender, Labour and Social Development, Kampala Capital City Authority (KCCA) as well as some NGOs took the children off the streets in a major operation that gave motorists temporary reprieve, but earlier this year they returned in seemingly bigger numbers.

Many are babies under a year old, used as ‘bait’ by older children, and The Observer saw infants seated on the pavements with a simple plate, containing money given to them by passersby.

Some of these children can barely speak, but have been trained to hold out their hands to beg for money and say the vital Luganda words. Most only know, “Auntie, mpako kikumi”, or “Uncle mpako kikumi” as they follow pedestrians and rap on car windows.

The Observer team found Asio near the main gate of Makerere University, and discreetly convinced her to speak in sputtering Luganda and some Ateso that the team could speak. Asked where she lived, Asio said, “Kisenyi.”

But she clearly was not in the mood for conversation and when the team gave her Shs 500, she promptly left, careful not to be caught conversing with the ‘clients’. The children are carefully watched by older girls and women on the sidelines – call them supervisors.

We continued to the traffic lights near Full Gospel church, and another child approached us, asking for money. We asked him for his name in Luganda, and he said, “Akon”.

Akon is about seven years old, seemingly friendly, although he looked hungry. He was in the company of seven other Karimojong, where one was crying after being beaten by a much older girl, who was talking in harsh tones.

Akon seemed not to understand anything we said and only answered “yes” to everything asked. Where do you live? “Yes.”

Frustrated, our communication was minimal, and before The Observer team could press further, Akon was harshly summoned by an older girl seated on her lesu on the street. The Observer noted that she was dressed rather well and even had a phone with her. A supervisor, most likely.

The Observer stayed at this junction for a while, watching a group of girls and boys about five to 13 years old approach motorists to beg for money then retreat to rest and share notes whenever the lights turned green.

Traffic jams give them chance to make a harvest, but this has risked their lives to accidents from boda bodas, although the safety of motorists is also at stake.

Some of the children are hostile and spit at unyielding motorists, or pinch them if the windows are down. They regularly fight among themselves, hurling stones at one another, not minding about passersby or the cars.

Along Sir Apollo Kaggwa road, a group of three girls of about ten years, begged for money car to car. We beckoned one of them over and she crossed the road recklessly, almost giving us heart attacks as she possibly anticipated the money waiting with us.

This girl, Anna, said in broken Luganda that she stays in Kakiri, but based on The Observer’s findings, that was probably a lie. These children never stay far from the city centre, because their ‘employers’ do not spend on transporting them to their ‘work stations’.

When the other two noticed Anna was talking to us, they hurriedly joined us to ask her what the matter was. They were furious after listening to Anna and spoke rapidly in their language, and quickly left.

We returned to Wandegeya and tried to talk to one of the supervisors, but she ignored us and hastily walked away. Information about these children is a safely-guarded secret, because of the language barrier.

Not satisfied by the tidbits from the few children we had interacted with, The Observer decided to head to Kisenyi in downtown Kampala, where these children claim to live.

This slum is not a place for the faint-hearted and it was terrifying wading into the maze of shacks and filth. We reached a motor garage and the mechanics directed us to where they usually see these children, a place known as China town. We walked for about 40 minutes but could not spot any Karimojong child around.

A carpenter said the children come around in the evening hours, but he was not sure where they slept at night.

He said they are a menace to them, stealing their tools as they pass by. Unlike regular street children that sleep on shop verandas, these Karimojong children cannot be seen on verandas, pointing to the possibility of a well-oiled begging machinery.

The carpenter said a group of Whites picked interest in a number of street children and rented them a house, which he showed us. When The Observer got to the flat, the children had moved out and it was occupied by Somali refugees.

Finding these children’s roots in Kampala was proving harder than finding a needle in a haystack. The Observer continued to Kisenyi market, where we spotted some of the girls holding brooms and sacks.

One of the girls was too shy and hardly spoke Luganda, but she said she lived in Katwe. She declined to talk to us about her personal life or anything else.

In the market, several of the girls have abandoned begging for odd jobs. Some of them, aged between 15 and 20 years were sweeping and sorting grains; they are paid per kilogram sorted.

Haruna Kanakulya, a trader who buys the sorted grains, told The Observer the children come from Moroto district and they transport themselves to Kampala. “They fear people who want information from them, suspecting they are from KCCA, because one time KCCA came and collected them and took them back to their home towns,” Kanakulya said.

Kanakulya tried to get one of the girls who understood Luganda to speak, but she was hostile and refused to talk.

“They are hostile in character and don’t respect people; they barely know Luganda but speak Kiswahili and their language,” said Kanakulya.

WHERE ARE THEY FROM?

The children in the market earn between Shs 5,000 and Shs 10,000 a day. Kanakulya said they live in groups of eight to 10 in rented houses in Katwe and don’t sleep on the streets. He said the children ‘graduate’ from begging at streetlights to the odd market jobs.

Still, the question begs: how do they end up in Kampala? Who could be gaining from their stay on the streets? Why are all the children from one region of the country?

A source, who has studied these children, but declined to be named, told The Observer the children are brought by different groups of people who purchase them from Moroto, Napak and Soroti districts, and bring them to Kampala by bus for financial benefit.

They are reportedly purchased for between Shs 30, 000 and Shs 50,000 brought to Kampala and sold to other clients to work for them as street beggars.

Their ‘owners’ rent for them cheap premises in slummy areas of Katwe, and are often victims of rape and prostitution. Some end up pregnant and single mothers when they are as young as 12 years.

Interviewed for this story on Monday, KCCA deputy spokesman Robert Kalumba said, “We take these street children to Kampiringisa but they escape. Our job is to remove them from the streets. Our mandate stops at taking them to the designated places but we can’t explain why they escape. We can’t answer that because it’s the ministry of Gender that says these children must stay in designated places,” he said, adding “We are preparing to get these children off the street again, and we call upon the mafia gangs that bring these children to cooperate with us and stop this business of bringing children on to the streets to beg for money. Yes, it’s a business, someone profits from it.”

Interviewed on Monday, Daniel Nuweabine Muhumuza, KCCA’s head of Public and Corporate Affairs said, “Let’s not say these children are Karimojong, they come from north-eastern region, which is full of tribes such as Kumam, Kakwa, Pokot and Labwor; so, until you ask a child his or her tribe, you cannot identify that child by their tribe. Children get on to streets due to different reasons like mistreatment at home, domestic violence, death of parents, however it is also a result of peer pressure. And when it comes to children from northern Uganda, sometimes it’s about business.”

“Some people get children on to the streets to beg for money and take it to them, but that is a crime. About two months ago, we arrested and prosecuted some people involved in this act and they pledged in court not to do it again,” he said.

“About six months ago when Covid-19 peaked, we evicted about 250 street children and we took them to Nakivubo Blue primary school to secure them from acquiring Covid-19. We tested them and those found positive where contained in the place and treated whereas those found negative were taken to Kazi, for skilling. They spent months at Kazi then we released them. Those with families were reunited and those without were taken to different NGOs….”

+1 #1 kabayekka 2021-09-22 16:19
Of course if their parenthood were given welfare money to try and look after them, these African children would not be giving away their lives anyhow like that.

Of course these kids are very clearly seen to all the adults who use these Kampala streets. Even the President's convoy of 20 cars is clearly seen passing them by as they struggle to make a living.

Most probably that is why the President of Uganda is bent on blaming the evil system of mailo land tenure in Buganda, in the hope that if it is changed, these kids would be able to own some land and be able to go in the countryside and cultivate their food!
Report to administrator