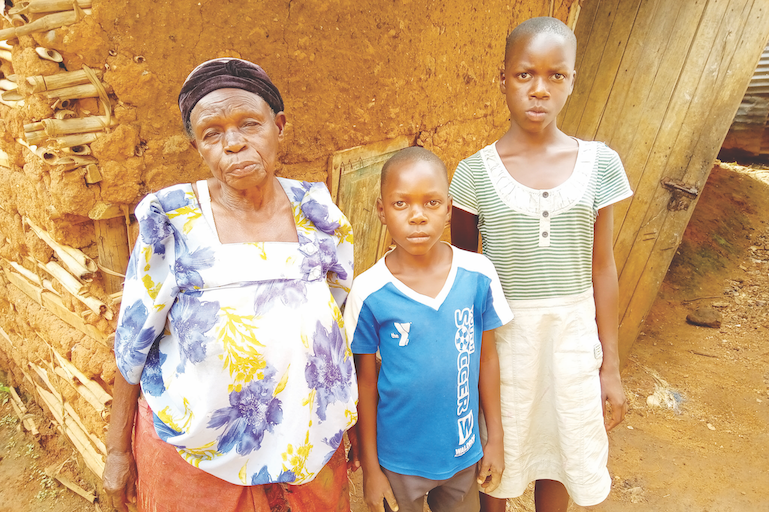 When the prime minister of Uganda, Robinah Nabbanja, started the distribution of the Shs 100,000 ($28) Covid-19 lock-down relief back in July, she received a lot of ridicule from sections of society.

To many, the sum of money Nabbanja was intending to give out as part of government’s intervention, to help each of the near half a million people, classified as vulnerable, was considered a joke and abuse of human dignity!

Just how was someone, particularly one with dependants, going to break down this money; and ensure that it sustains them through the 42 days of the Covid-19-triggered nationwide lockdown, between June and the end of July?

Every recipient of the Shs 100,000 had to use Shs 2,380 per day to cover 42 days, essentially teaching people how to live poor, and still survive the hardship. This money is below the $1 (Shs 3,600) per day threshold that government uses to measure poverty rates.

Safiina Namusoke, 66, a resident in the slums of Nabweru South, knows a thing or two about living poor, and still making it against all odds. Residing in a mud-and-bamboo (locally known as emmuli) built house, that is on the brink of collapsing, she told The Observer that any money she gets is a huge boost to her and two grandchildren under her care.

In fact to Namusoke, she was in shock to hear people consider the Shs 100,000 government distributed as useless. Going by the Luganda cliché: Akatono kazira mu liiso, loosely translated as “a small thing is only not good in the eye”, perhaps as one has experienced, when a small speck or insect falls in your eye, and the discomfort it brings them, Namusoke was grateful with the gesture.

“This money is good enough for the three of us, definitely; to get us through the month. I have pulled this off even with less by investing it. I normally buy a sack of charcoal with this Shs 100,000 if I get it. So, by breaking up this charcoal into small portions of Shs 500, I am able to sell charcoal worth Shs 2,500 to Shs 3,000 everyday,” Namusoke said.

But more significantly, they have mastered the art of survival. And this is how: After they invested the Shs 100,000 in buying a sack of charcoal, she bought some beans, quarter a kilo for Shs 800, half a kilo of maize flour for the posho meal at a cost of Shs 700.

That left her with Shs 1,000 to spare. With it, she would buy some sugar, a quarter kilo for Shs 750 if necessary, and the balance, something to eat at breakfast, like cassava. However, Namusoke said, that they did not spend the money like this everyday, because sometimes, the posho that remained, they would use as bread during breakfast time.

Yet, Namusoke and her crew would win a “Survivors” series. “Sometimes, we can go without breakfast, and wait for lunch. I guess our bodies have adapted to this kind of state. Our life is predominated by fasting. It is nothing new especially for a woman like me, who has grown up Muslim. Although my grandchildren are not Muslim, they have learnt from me,” Namusoke said.

A number of people, such as Namusoke, used some of government’s Covid-relief cash to grow their small businesses, but the money was still not enough.

The experience of some of the poor people The Observer spoke to pointed to the need for government to create employment opportunities for them to earn sustainably.

SURVIVAL FOR THE FITTEST

Incidentally, Namusoke is not one to grumble about her state of livelihood. She maintains a high spirit even in need. During the time local council officials moved around to register people who needed the government Shs 100,000, she was found at her home. She registered using one of her older granddaughter’s phone number and was expectant.

Unfortunately, the government money has never come to-date. But as she waited, a good Samaritan neighbour gave her Shs 100,000 during the lockdown to keep Namusoke and her grandchildren going. At the end of 30 days, Namusoke still had Shs 10,000 in her house, to take her for at least an extra week.

Incidentally, Namusoke is not the only one that has honed the skill of living small. This is the story of her life; one that probably would inspire many that mourn the lack of cornflakes and sausages.

Muhammad Mpanga, a bricklayer and farmer in his 60s, also resides in Lwadda ‘B’, Matugga, off Bombo road.

At least for Mpanga, he received the Shs 100,000 from government, and his expectations were greatly fulfilled, perhaps to the wonder of an averagely living Ugandan. Mpanga told The Observer that under the circumstances, where there is little work from which to make an earning, a freebie was a saving grace.

Living in a small two-bedroom house with his wife and four grandchildren, Mpanga bought 35kg of maize flour for Shs 40,000, which represents close to Shs 1,150 per kilo. This is usually the maize flour eaten by students at school, bearing the maize husk. It looks brownish or yellowish in colour.

Then Mpanga bought silver cyprinid (mukene) for Shs 10,000, which is about 20 commonly used Tumpeco plastic cups. These cups take in about half a litre (500ml) of liquid. Just a half of it filled with mukene is substantial to make source for lunch and supper to accompany the posho, according to Mpanga.

So, instead of beans, which are relatively expensive, averaging Shs 2,500 a kilo for the cheapest, Mpanga and his family were well covered eating mukene. Besides, mukene does not require a lot of charcoal to prepare. In fact, within 20 minutes, it would be ready to eat unlike dry beans that would need two hours of cooking at high temperature.

A total of Shs 39,500 remained. This covered things like toothpaste, salt sugar which is not a basic requirement for him, but may be for the grandchildren, who need a little sweetener in their tea or porridge.

Otherwise, Mpanga bought some firewood, paraffin (a litre goes for Shs 2,800) to light his tadooba (lamp) before they sleep at 8pm (early sleep saves on the paraffin), tea leaves, food like sweet potatoes, tomatoes, onions, some cooking oil (Shs 7,000 a litre) and cassava, which came in plenty, to last him a week, for just Shs 5,000.

What Mpanga did was to venture out and find affordable and cheap food and basic needs, to make sure that the Shs 100,000 could see him through a protracted period of the lockdown, which he is proud to say, it did.

But not for Yunia Namugga a resident of Kalerwe, off Gayaza road, who totally dismissed government’s Shs 100,000 gesture.

Brenda Akello, 24, a guava trader from Naguru Godown, also lives small with her two children, including an eight months old baby. Akello’s husband disappeared during the first lockdown. She revealed that her expenditure daily is Shs 10,000.

Mariko Nsubuga, in his mid-30s, is a vehicle mechanic in Katanga. To cater for his wife and three children, he spends Shs 3,000 on matooke, rice or any other food everyday. Then Shs 3,000 is set aside for charcoal, Shs 3,000 on half a kilo of groundnut sauce or a kilo of beans daily. Beef is not even in consideration. The balance of about Shs 2,000 is spent on breakfast for the family, which can be with or without sugar.

As a tailor in Kamwokya, Dodoviko Lubega, 65, resides near the Wakiso district offices, which is overseen by the Kavumba Recreation Centre. He has to walk 30 kilometres if he is to access his work.

“I need at least Shs 13,000 on home utilities everyday; that is why I walk all this far; otherwise, if I decide to board a taxi, there will be no food at home. I need a good job.”

0 #1 Uncle Philosopher 2021-09-22 11:30
Long after 38 yrs, The NRM government headed by the greatest general should be able to celebrate because its citizens can survive on less than a dollar a day.

Less than half of the poverty line threshold. I think at this rate even the midro income line should be lowered to 192 dollars per year.

Then we as the NRM government will have driven our country to the middle income status.
Report to administrator