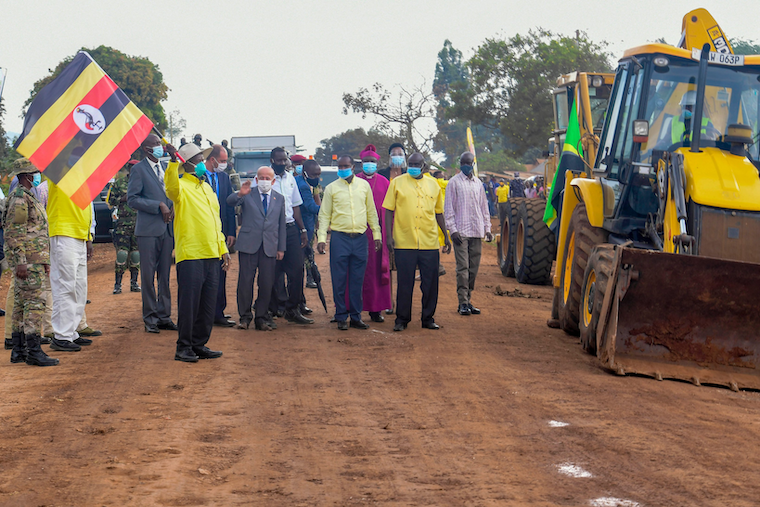 The fate of the 92km Muyembe-Nakapiripirit road hangs in balance after Turkish contractor, Polat Yol Yapi, failed to beat the September 14 deadline to complete 15 per cent works on the project.

Sixteen months since Polat Yol Yapi commenced works on the three-year project, they had only achieved three per cent by August 17, a slow pace which forced Uganda National Roads Authority (Unra) to give the contractor a 28-day deadline to finish at least 15 per cent,  writes THE OBSERVER TEAM.

Now that the ultimatum passed without any success, this has thrown various project stakeholders into panic. Reached out for a comment, a Unra official who preferred anonymity said the project’s fate is now in the hands of Allen Kagina, the Unra executive director.

Meanwhile, The Observer has obtained a confidential report by a Unra technical team about the progress of the project, which concludes that Polat Yol Yapi lacks capacity to complete the project in spite of receiving a combined advance payment of Shs 71bn.

“Polat Yol Yapi has failed to mobilise equipment, failed to set up an asphalt plant and also failed to acquire a rock and crusher for it. As a result, they lack capacity and need to be replaced,” reads part of the report.

“What is most worrying is that Polat Yol Yapi has incurred a lot of debts and has failed to pay local sub-contractors. All these complications may lead to several legal complexities yet we need to save the project. Our conclusion is that the contractor’s continued woes will render the project a death-trap.”

The project has suffered a spate of setbacks since the start in March, 2020. Matters were compounded recently on September 8 when flash floods washed away the temporary Namalu Bridge to cut off the Mbale-Karamoja route as well as that which connects Bulambuli to Moroto.

The bigger worry is that several other temporary structures on the road could cave in or get washed away if there is no intervention. According to the report, the biggest losers are unpaid indigenous firms sub-contracted by Polat Yol Yapi to do works whose works have expired or nearing expiration.

In fact, the report describes Polat Yol Yapi as simply a middleman using indigenous companies to do the work as Arab Contractors, another Middle East company, did on the Pallisa Kumi road.

It is on this background that the leadership from the sub-region and some top officials from Unra have expressed deep concern about the viability of the project under the current circumstances.

As a result, the delays and crumbling works have sucked in the State House Anti-Corruption Unit (SHACU), the Inspectorate of Government as well as the Auditor General, among others, to investigate and audit the circumstances of the delay in order to remedy the situation and bring culprits to book.

At the centre of investigation is how Polat Yol Yapi, a hitherto unknown entity, came to win the contract and why, after almost two years, they’ve failed to make any tangible progress in spite an advance of Shs 60bn from Unra.

However, the project was doomed from the onset when Polat Yol Yapi diverted the Shs 60bn to a road project in Kuwait while SCET Tunisie used their Ugandan associates, MBW Consulting Ltd, to do the supervision on their behalf.

Since then, there has been little activity on the ground as both companies use the Covid-19 pandemic as an impediment to their work. At the moment, there is hardly anything to show for the progress apart from the temporary structures and bridges done by indigenous sub-contracted firms.

However, after months without any progress by Polat Yol Yapi, these temporary structures have started to give way, creating a danger for the road users.

In fact, it was a huge relief that the flash floods that swept the Namalu bridge didn’t claim any lives but what now is of major concern is that many other bridges are in a dangerous state and could cave in anytime soon.

Ubantu Services, the subcontractor that constructed the bridge, was forced to abandon the site maintenance due to the funds owed to it by Polat Yol Yapi.

“The Namalu Bridge located at 61km on the Muyembe-Nakapiripirit road was constructed in 2019 to last for just one year after which Polat Yol Yapi would construct a permanent passage,” reads part of the report from Unra’s field team that visited the site last week. “It is unfortunate that the delay by Polat Yol Yapi to reach that point in time caused the bridge to be washed away and as a result encumbered movement and trade in the region.”

“There is serious worry Polat Yol Yapi will not accomplish the task in the remaining 20 months because they lack capacity. Other than a generator, they [Polat Yol Yapi] have no equipment on the ground and even the provider of tippers demobilized them after not being paid,” reads the report. “It is despicable that they [Polat Yol Yapi] are hiding behind the Turkish embassy and hired a grader for President Museveni to launch the road in November 2020.”

Another case in point is the tug of war over a temporary bridge on the 11.2km section of the road. The report notes that due to Polat Yol Yapi’s failure to pay a sub-contractor, there is a looming disaster at that bridge.

Records show that in September 2019, Polat Yol Yapi subcontracted Spike Engineering Consult to build the temporary bridge to last eight months at a total cost Shs 140m. Among others, Polat Yol Yapi was to provide the needed murram to fill up the section. The contractor only advanced Shs 56m, which is 40 per cent of the work and was due to make another payment upon 80 per cent completion of the works.

However, it became apparent Polat Yol Yapi had run out of funds when they failed to honour the agreement. According to documents that The Observer has obtained, Pius Bagaza, the local representative of Polat Yol Yapi appealed to Spike for more time and advised them to borrow elsewhere to complete the work. As a result, Spike Engineering Consult has since sued Polat Yol Yapi for breach of contract.

“Unknown to Spike, Polat Yol Yapi had burnt their fingers in the Kuwait deal and had no money to pay,” reads the report.

What followed was for Spike, at the behest of Polat Yol Yapi, to borrow money to complete the work in time but that turned out to prove costly as Polat Yol Yapi downgraded their progress at 51 per cent.

It the ensuring stalemate, it soon emerged that Polat Yol Yapi had to move prefabs in the area to construct a camping site and that required to move more than 27 heavily loaded trailers past the bridge.

“They [Polat Yol Yapi] forcefully took over the site and instead of filling it up with the agreed 1.5 metres of murram, they put less than a metre and it caused a depression as a result of the trucks’ passage and it has since worsened and could be washed away by heavy rains soon,” reads the report.

“Failure to get payment by the subcontractor [Spike] has cost them more than Shs 120m yet they still demand Shs 112m from Polat Yol Yapi. If this case is not settled, we could end up in a protracted legal battle that could affect all works.”

It remains unclear how the current impasse between Polat Yol Yapi and local sub-contractors will be solved but there is no denying that the project may have already suffered a still birth.

0 #1 rubangakene 2021-09-22 04:42
Are there any intelligent Ugandans still standing? Are we so stupid we can't see through these foreign firms for what they really are?

I think maybe "the ship is really sinking"; in that case , count me out, I am jumping and swimming ashore, life vest or no life vest.
Report to administrator
+1 #2 WADADA rogers 2021-09-22 08:58
Oh dear, this country is now at the mercy of God, the debts are accumulating every other day yet with no tangible results, roads are made with a life span of three years only to be re allocated to another contractor with a higher offer. It is a rebirth and re- incarnation of the Katosi scandal in the offing but who is to blame, our usual greedy chaps in Government who care about their own stomachs, "F" them
Report to administrator
0 #3 kabayekka 2021-09-22 15:38
Indeed it is up to the Islamic Development Bank to sort out this Bufere business otherwise it is likely to loose a lot of money.

Since Tunisia and Kuwait are religious Moslem countries, the government of Uganda might just get a refund of 60 billion shillings that the Turkish dodgy subcontractor diverted to build a road there.

But it is very silly to have to hire the expensive machinery as a show off to the electorate of these regions.

They were lied on that the best technicians from Turkey had come to start building the African tarmac road of 75 miles in only 3 years time!
Report to administrator
0 #5 Zaitun 2021-09-25 15:07
[quote name="kabayekka"]It is unfortunate that this government does not want .... to know what sort of business agreements it makes with the foreign investors.]

What have you said, investor? You have got the reason why!

These people are right to call themselves investors as long as they reap heavily in whatever they are doing at the expense of Ugandan tax payers. They are eating where they just threw a few coins.

How sure are we Ugandans that these companies do not belong to these fake politicians? Otherwise, how can they continue keeping quiet, refuse to bring these evil doers to book, but instead kill those who criticise them, who point their evils out to public?

I am quite convinced that all these fake companies have their owners in responsible positions in the government and collude with foreigners as the rightful owners only to steal monney.

In this case, how can a company without graders get a lucrative job without the knowledge of govt officers?
Report to administrator