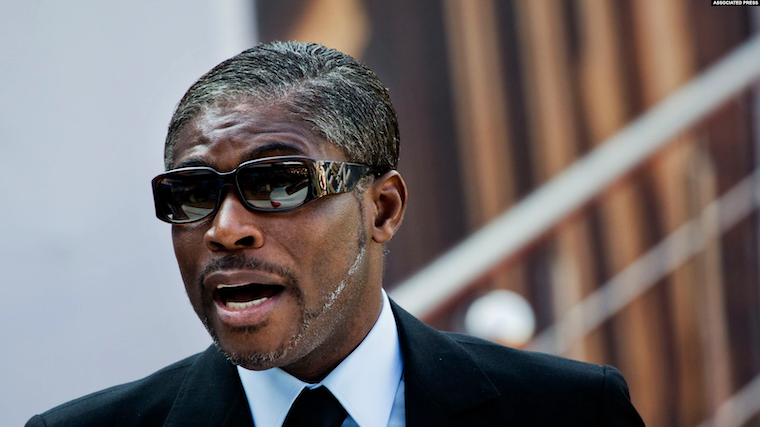 The US Department of Justice (DOJ) says it will use money from assets seized from Equatorial Guinea vice president and first son, Teodoro Nguema Obiang Mangue, which Obiang obtained through corruption.

Of that amount, $19.25 million will go to the United Nations to buy COVID-19 vaccines, and $6.35 million will pay for medicine and medical supplies for Equatorial Guinea.

In a news release, the DOJ said Obiang used his position as minister of Agriculture and Forestry in 2011 "to amass more than $300 million worth of assets through corruption and money laundering, in violation of both U.S. and Equatoguinean law."

According to a 2014 settlement agreement, Obiang was required to sell a $30 million mansion in Malibu, California, a Ferrari automobile, and "various items of Michael Jackson memorabilia," DOJ said.

"As provided in the agreement, $10.3 million of these settlement funds were to be forfeited to the United States, and the remaining settlement funds would be distributed to a charity or other organization for the benefit of the people of Equatorial Guinea," the DOJ news release said.

Obiang has also been convicted in France for purchasing luxury properties with illegal funds. He was given a suspended three-year sentence and fined $35 million. Equatorial Guinea is rich in oil, but most of its 1.4 million citizens live in poverty. Obiang's father, Teodoro Obiang Nguema Mbasogo has been in office since 1979 after ousting his own uncle through a coup.

+1 #1 WADADA rogers 2021-09-21 09:38
All mighty God, the master of all the living and the dead, Am am one of those few Ugandans that never bother you with endless prayers, this time round do it for me and help us identify all the wealth that has been stolen and kept here as well as a broad and then help give us an Amin like kind of President to return all that has been taken by those in power and their relatives.
Report to administrator
+3 #2 Lakwena 2021-09-21 09:47
This is how sickening is; "the Problem of Africa".

As Days follow Nights, inevitably Ugandans will one day come to know how much our "own Problem of Africa", the King of Bloodshed, Gen Tibuhaburwa and his family members, relatives, cronies and sycophants, have stashed away; either cash under their beds or offshore banks and/or sanitized (laundered) in properties within the country.

Behold, the day of the LORD cometh, and thy spoil shall be divided in the midst of thee.

2For I will gather all nations against Jerusalem to battle; and the city shall be taken, and the houses rifled, and the women ravished; and half of the city shall go forth into captivity, and the residue of the people shall not be cut off from the city.

3Then shall the LORD go forth, and fight against those nations, as when he fought in the day of battle.
Report to administrator
+2 #6 kabayekka 2021-09-21 17:34
This is the African family that wanted to continue ruling that country because it had a real good future vision.

And this is exactly what the Parliament of Uganda expected of the family of President Museveni of Uganda.

The constitution of Uganda was very clear for Uganda that there should not be any more need for presidential leaders of Africa to be removed by war or military coup.

They should serve their people for two terms, and at the age of 74 they must retire. What good is there for them to continue serving paka last and then put up their children or wives to take over such leadership. Abantu abamu tebatubalamu magezi!
Report to administrator
+1 #7 Lakwena 2021-09-22 08:01
Quoting rubangakene:

Imagine Uganda has got a contingency of 250 soldiers guarding these "devils and their loot"; why on earth?

In other words Rubangakene, our soldiers are being dehumanized and hired out as Mercenaries for the Equatorial Guinea dirty oil-dollar fee; which is raked back into the Bloody Pockets of our 36-year and counting tormentor.