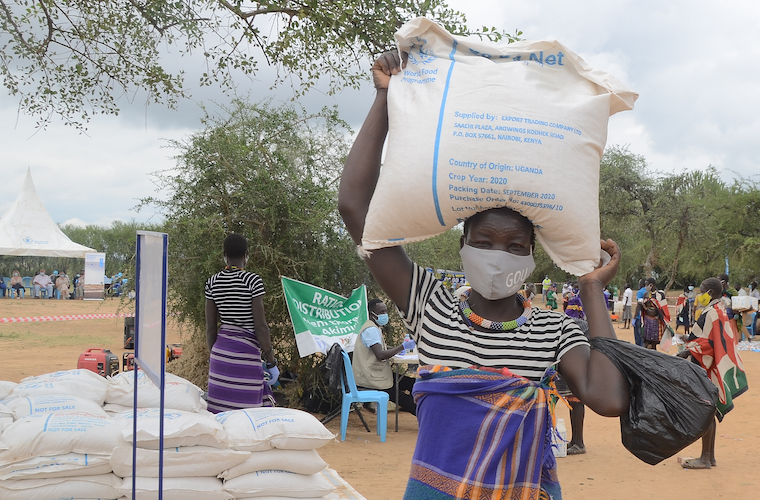 Currently, six districts in Karamoja are classified to be in food crisis, with 30 per cent of the population (361,000 people) faced with high levels of acute food insecurity in the region.

With the exception of Amudat, Karenga and Nakapiripirit districts that are in food stress, all the other districts have been classified to be in food crisis. Overall, the food security situation in the region has deteriorated with the highly food insecure population increasing from 27 per cent in June 2020 to 30 per cent in March 2021.

Households faced with high acute food insecurity have large food consumption gaps and can only meet their minimum food consumption requirements after employing crisis and emergency coping strategies. Children in these households are also facing high levels of acute malnutrition due to inadequate access to food.

The Pro-ACT programme is aimed at preparing local communities for food security disasters like famine, drought and malnutrition before they happen such that by the time such problems strike, households already have the necessary resources to help them get through that period on top of strengthening shock response systems through early warning patterns and assistance that enables households to reduce their risk.

Priya Gujadhur, FAO’s deputy representative in Uganda said that the project is not about a reactive response but a proactive response to predict the food security shocks and provide information in a timely manner so that the communities and government can take the right action to prepare for the shocks and reduce their impact on the communities, households, lives and livelihoods.

“We are working with the Government of Uganda to build an effective early warning system for Karamoja that will predict in time food security shocks and then support government and communities to prepare accordingly,” Priya said as she emphasized the importance of strengthening the capacity of national and local stakeholders.

“Early identification of risks linked to clear action will reduce the impact of food security shocks before needs peak.”

According to the EU Head of Delegation, Attilio Pacifici, this year, 30 per cent of Karamojongs are currently facing acute food insecurity and are in need of urgent action with the situation having been escalated by the desert locusts, Covid-19 restrictions and increased insecurity in the region since late 2019.

“Under the Development Initiative for Northern Uganda (DINU) programme, we have also mobilised additional €10 million since 2019 to provide food assistance and increase resilience capacity to shock affected households,” Attilio said.

The LCV chairperson of Kotido district Paul Komol Lotee said that the project is going to help the Karamoja sub region with the urgent support they need when it comes to preparing and responding to food security shocks such as drought.

“Our people are suffering because there was no rain, the crops failed, and they do not know what to do. This happens every lean season and yet we are never prepared. We need to give people timely and accurate information and improve their capacity to prepare for shocks.”

Esther Anyakun, the state minsiter for Relief, Disaster Preparedness and Refugees noted that the government is committed to ensuring everyone in Uganda, including Karamoja has enough nutritious food.

“We need partners such as EU, WFP and FAO to strengthen our response all over the country. Our people need simple weather information that they can understand and act upon. Government welcomes the project because it aims to empower communities with information and provide sustainable solutions. Information is power and in the case of shocks, information is lifesaving.”

For the 28 months, the programme is going to be running in the Karamoja sub region, over 57,800 beneficiaries who are food insecure are expected to be assisted with 34,680 of these being women and 23,120 men.

0 #1 kabayekka 2021-09-20 13:58
One hopes that this assistance will get to those who need it most unlike the recent assistance which was meant to provide 100,000 shillings to the most vulnerable citizens of this country because of the problems of COVID19 pandemic.

Such assistance given should go further to help sustain the population into improving the environment and to sustain their Agricultural output. One understands that the IMF and the World Bank are very eager to give such assistance to Uganda and Africa at the tune of 1 billion dollars as a debt but without the need to expose how such lots of money is going to be spent.

Uganda is a poor country and it already owes such expensive international organizations much debt which are paid for every other month.
Report to administrator
0 #2 rubangakene 2021-09-20 14:44
What the Karimojong need is not foods in sacks but' real meat dripping with blood' so that they can prepare it anyway the see fit.(their own recipes).

Unless we can understand this, the problem won't be solved. My advice is to sit down with the elders and 'hammer out' a way forward in a humane way.
Report to administrator
0 #3 Lakwena 2021-09-20 15:42
In other words, what is wrong with these EU people, especially after being referred to as "a bunch of useless people"; by non other than the arrogant King of Bloodshed, Gen Tibuhaburwa himself, during his 2016 swearing-in ceremony?

Just asking.
Report to administrator
0 #4 Akao 2021-09-20 15:58
M7 securing the future of Karamoja through EU and WFP. Next time, he will be in a wheel chair campaiging, i will secure your future, and everyone will be nrm oyee, long live museveni.

Uganda will fall so bad, those who have ears should start packing and find a better country, it is impossible with increasing recruitment of ldu and updf.

You wonder who the war is going to be aganist, if not citizens
Report to administrator