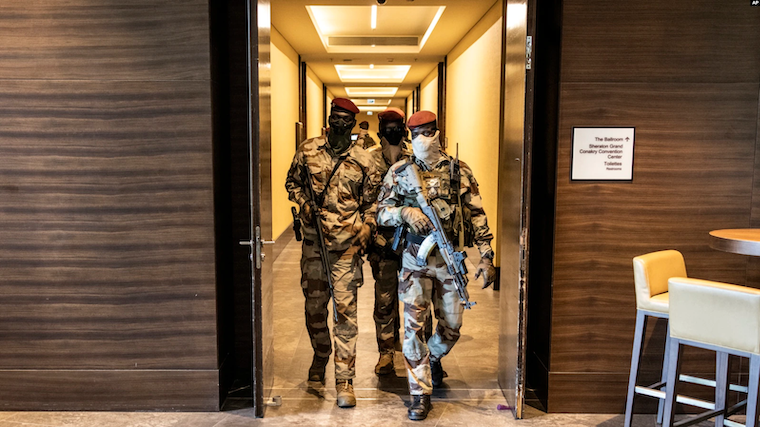 Junta soldiers walk through a hotel during a meeting of with high level representatives from the Economic Community of West African States (ECOWAS), in Conakry, Guinea

Guinea's junta has said it will not bow to pressure from West African leaders to allow ousted President Alpha Conde to leave the country.

Dozens of Guineans protested against sanctions levelled against their country as two West African presidents arrived for talks with coup leaders on Friday (September 17).

But it wasn't only outside the airport in the capital Conakry where defiance was on show. On Thursday (September 16), ECOWAS agreed to freeze the financial assets of the junta and their relatives, and bar them from traveling.

The next day presidents Alassane Ouattara of Ivory Coast and Ghana's Nana Akufo-Addo arrived in Guinea.

They were asking for Conde's release. But on state television the junta, which seized power two weeks ago, said: "The former president is and remains in Guinea. We will not yield to any pressure."

After talks with coup leader Colonel Mamady Doumbouya, Akufo-Addo said they had held "honest, brotherly meetings" and that he was confident Guinea and ECOWAS would find a way to "walk together."

+7 #1 Lakwena 2021-09-20 12:05
I am in agreement with the Guinea Junta's vow. This is because, when the African dictators they show up save are stealing and killing their fellow countrymen, women and children; the ECOWAS and the AU of this continent are nowhere to be seen to condemn the criminals at elms of office and power.

Because of their arrogance and above all, their inhumanity to humanity, these corrupt, thieving, manipulative, cruel and foul African leaders (Problem of Africa), need to also to be humiliated the way they humiliate their honest critics.

In other words, I wish Uganda was Guinea now and/or becomes. So that our arrogant dictator is also humbled.

Otherwise compared, how many got killed in the Guinea Coup and how many Ugandans lost their lives and properties during 5-year NRA and to date so call revolution?
Report to administrator
+4 #2 kabayekka 2021-09-20 14:15
Good that these African soldiers are getting involved in their country's politics with the objective of trying to improve the human rights of their citizens and that of the former President himself.

Surely why should this Guinea first gentleman and his first family run away from their country when the going becomes tough?

Indeed if such leaders are allowed to run away from the problems they have caused in their country, chances are they are likely to come back and cause the same problems again.

The late Dr. Obote brought the gun in the politics of Uganda. The gun sorted him out and he exiled himself in Tanzania. After nine years he came back bullets flying. He declared; "Where I stopped governing is where I am going to start again."
Report to administrator
+1 #3 Kalibbala 2021-09-20 21:06
#Lakwena and Kabakayekka..We are yearning to Celebrate the Death of All these Terrorists who are Holding Our Countrymen and Women Hostage! Tinyefuuza,Kayihura, Muntu, Besigye, Tumukunde,Kisiraani Himself and All his Family to be Hanged by their Balls!!

All of Them..So Far they are rejoicing on our Graves! 10.000.000 Dead People in the Great Lakes Region!!Simply because Notorious Robbers Army/Movement Declared War against Humanity...Time is running out on Them! Doumbiya Juu zaidi ! Amaandla..nga wethu Nkosi sikeleli Africa..
Report to administrator