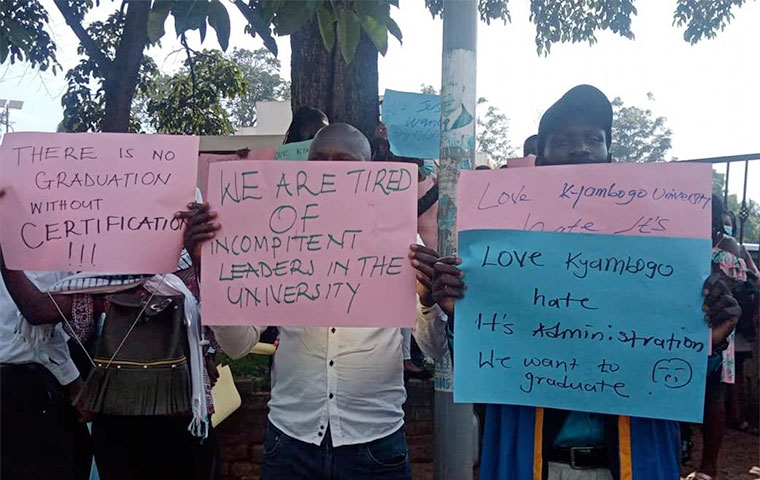 Students staging a protest at the High court

The High court in Kampala has dismissed an application seeking to block the 17th graduation ceremony of Kyambogo University.

The decision arises from an application filed on September 14 by 45 students who sought a halt to the graduation ceremony fixed for next week, September 21-23, because their names were missing from the list of graduands.

The students, led by Keneth Masereka, stated that they had successfully pursued different courses at Kyambogo and passed all the subjects undertaken according to the information on their respective student portals run and managed by the university. However, their names were missing from the lists that were released through the different department heads.

They asked court to grant them an interim injunction restraining the university from holding next week's ceremony in order to save them from suffering irreparable damages. But their application was dismissed by principal judge Dr Flavian Zeija on grounds that the affidavit supporting it was not signed before a commissioner of oaths.

Court heard that the affidavit sworn by Moses Arupei, a student of oil and gas production, was drafted from Kyambogo University by Joel and Cox Advocates and signed from Twed Towers, the building that houses the High court civil division. The affidavit bore a stamp by Raymond Owakukiroru as the commissioner of oaths.

But Kyambogo University lawyers led by Cyrus Baguma objected to it on grounds that it was incurably defective since it was not sworn and signed before the commissioner of oaths as required under the law. Baguma had earlier on called Arupei and confirmed that the affidavit was signed from Twed Towers.

Justice Zeija accordingly dismissed the application, saying that there is a tendency for lawyers to draft affidavits and taking them to their clients for signing when actually they have not followed the required procedure of appearing before the commissioner of oaths. Darius Kansiime, one of the aggrieved students said he was still optimistic that they will get justice in a pending case challenging their exclusion from the list of graduands.

The university public relations officer, Reuben Twinomujuni has welcomed the decision, saying the graduation for 9,536 students will now proceed without interruption and when the aggrived students also sort the individual-based issues including paying tuition, missing marks among others, they will also be provided with transcripts.

Last month, Kyambogo University reported that its online database was deleted leaving about 29,000 students affected including prospective graduands. However, Kyambogo University vice chancellor Prof. Eli Katunguka has since indicated that they are hopeful that the deleted results and data will be retrieved. The criminal investigations department of police has also commenced inquiries into the incident.