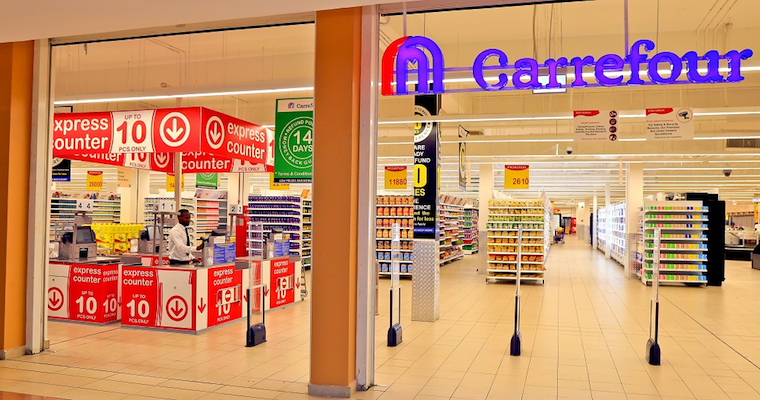 Carrefour will take over Shoprite stores

Majid Al Futtaim, a leading investor in shopping malls, communities, retail and leisure across the Middle East, Africa and Asia, on Wednesday, announced he has concluded an agreement with Shoprite.

According to the agreement, Shoprite will, by the end of the year, lease it's six stores in Uganda to Majid Al Futtaim, who currently operates two stores in Uganda. The six stores include Acacia Mall, Village Mall, Victoria Mall, Lugogo Mall, Clock Tower, and Arena Mall.

As part of the agreement, the Lugogo Mall and Clock Tower properties, which are owned by Shoprite, will also transfer to Majid Al Futtaim, who launched the first Carrefour store in Uganda in December 2019 at Oasis Mall, Kampala, and in March 2021 opened its second store in Naalya.

Hani Weiss, the chief executive at Majid Al Fittaim Retail says that on implementation of the agreement, the UAE investor will expand its footprint to eight Carrefour stores. Weiss says that their acquisition of Shoprite will boost their vision of expanding in the region "for the long term."

“We welcome the opportunity to bring our unique Carrefour offering of unbeatable value, range, international standards to more customers across Uganda," commented Weiss.

Shoprite announced three weeks ago its plans to exit Uganda and Madagascar, having earlier withdrawn from Nigeria and Kenya. In the notice to the shareholders, the company said it was refocusing its business interests to Southern African countries, where it made more business sense.

“This agreement represents our continued investment in East Africa. We look forward to strengthening our offering in the region and supporting local talent through employment and career development opportunities.”

Shoprite’s exit followed that of Kenya's Nakumatt and Uchumi supermarkets which, left billions of shillings worth of debts to suppliers, workers' salaries and rent arrears.

Among the reasons widely cited is the failure by the supermarkets to respond to customer preferences, low salary levels which led to theft by the workers, as well as stocking imported groceries which are deemed more expensive than local products.

Carrefour says it currently provides 20,000 products across its stores, of which 98 per cent are locally sourced. Other services include online shopping for its customers through partnerships with Glovo and Jumia Food.

Across Carrefour’s stores, Majid Al Futtaim says it sources over 80 per cent of the products offered from the region, making it a key enabler in supporting local producers, suppliers, families and economies.

+1 #1 Immaculate Nambi 2021-09-16 09:14
I will REALLY miss Game and shoprite. They were an escape for me; they offered me the opportunity to feel like I was shopping in an international supermarket.

The Carrefour stores in Uganda are significantly different from the ones elsewhere. They are basically large local stores and there is nothing wrong with that.

It's just that if I want local, I go to Capital Shoppers or Quality Supermarkets, not a pretend 'International' supermarket.

With Shoprite and Game's exit, it feels like Uganda is back to the early 80s where there were very little international goods.

In other words, beyond the limited and dwindling Middle Incomers and the highly indebted country that we have become; "over-expansion" will leads to a tragic collapse, which OCHUMI, Nakumatt and Tasky fatally suffered.
Report to administrator
0 #3 WADADA rogers 2021-09-16 12:29
These Branches are too many for Carrefour, they had better close the one in Nalya- metroplex, it is a none starter and it will not make them money
Report to administrator
0 #4 kabayekka 2021-09-16 15:35
Better to start calling them stores than supermarkets. Indeed it is the market forces that must determine the future of such supermarkets.

For Kampala food marketing, it was the outside markets with grass thatched roof tops. Then Nakasero market and other township markets where the politicians have interfered for the sake of looking for political votes.

What technology these days is saying is that the customer is always right.
Report to administrator
0 #5 kabayekka 2021-09-16 15:49
When one looks at online shopping these days, one asks, what is the use of driving to the supermarket when one can go online and buy and your shopping delivered to you on your door steps.

Certainly the time of humans sitting all day on products to sell and to buy are getting over. One only needs to see what e-bay or any other big retail stores work to understand what it all means. Retail stores that go to where the products are eg on the farm or factory have the future in Africa.
Report to administrator
0 #6 Zaitun 2021-09-16 18:47
With this unruly NRM government, the country is for sale.

By the way, are there no Ugandan souls capable of coming together to form strong competitive commercial groups? What economic strategy are we having in Uganda of today?

Be assured that Museveni and company is all ou to sell the country piece meal to anyone capable of giving him money. The Indians have already got their share of the country, now we see Arabs getting their due. What about Ugandans?

As long as we Ugandans only watch and are satisfied with doing nothing, we risk becoming slaves in our own country at the expense of Ugandans of dubious origins.

Do you think that this government introdused easy life without suffering among the youth for nothing?

It is a calculated means of rendering the Ugandan youths poor so that foreigners continue controlling the economy of the country.

Those who do not believe wil comee to learn in a hard way.
The country is already for sale!
Report to administrator
0 #7 kabayekka 2021-09-17 16:57
Known distribution commercial companies like Amazon, Parcel Force, E-bay, and DHL bring in the countries they work in, lots of revenue and employment despite accepting the digital commercial revolution.

They are turning the supermarkets into digital stores capable of distributing billions of products to their customers every other day.

They are functioning in shopping times of 24 hours 7 days. Unfortunately African governments are not ready for the super speeds these companies work with!
Report to administrator
0 #8 Entertainment 2021-09-17 17:02
Quoting WADADA rogers:

These Branches are too many for Carrefour, they had better close the one in Nalya- metroplex, it is a none starter and it will not make them money

I fully agree with you on this. Nalya one has the most annoying staff.
They switch off lights for customers after 5pm and start harassing US their customers!!.

They just want to close up and run home……at the very time customers are returning from work to start shopping.

It’s simply too annoying!!
Report to administrator
0 #9 kabayekka 2021-09-17 17:07
And surely what does self service in a modern supermarket mean. It means one walks in the well cleaned shop, picks what one wants, connect the item to the bar code and pay up.

Then exit the shop without much use of a middleman or a store worker? Indeed if one cannot take the heat, one must quit the kitchen.
Report to administrator