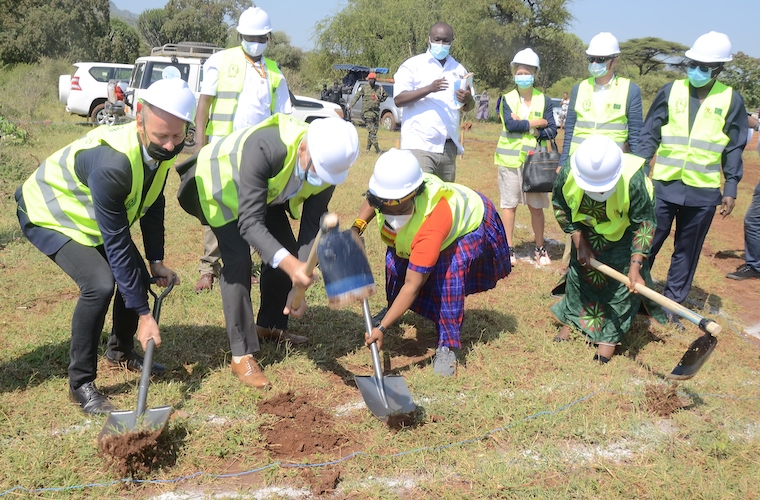 With support from the European Union (EU), police is set to construct seven new community police posts in Karamoja sub-region due to increased insecurity.

The police posts are going to be constructed in 7 of the 9 districts which make up the Karamoja sub region which are Abim, Amudat, Karenga, Kotido, Moroto, Napak and Nakapiripirit in the sub counties of Morulem, Alakas, Lokori, Nakapelimoru, Rupa, Apeitolim and Namalu respectively.

During the groundbreaking ceremony in Nakiloro village, Moroto district, commissioner of police Eng Franklin Kugonza said the areas where these police posts are going to be set up, have been identified based on high crime rate such as child trafficking, defilement, murder, cattle rustling corridors and cross border areas.

He noted that cattle rustling remains one of the offenses which directly affects the livelihood of the Karamoja communities and even though much has been done, police continues to have numerous challenges of eliminating the practice.

“We currently have a lot of cattle raids going on, but we have also geared up our police operations together with the UPDF. We, therefore, request that this initiative also considers improving the mobility of the anti-stock theft unit with transport equipment to effectively counteract the criminals and introduction of the canine unit to aid in tracking of cattle raiders,” Kugonza said.

With Shs 6.2 billion provided by the European Union for the construction to commence, each police post is going to consist of an office block, staff quarters, sanitary facilities, solar power systems, boreholes and motorcycles for transport as well as increase police capacity in community policing through training of at least 500 police officers within the region in community policing methodologies.

Attilio Pacifici, the head of EU delegation to Uganda said that over many years, the EU has collaborated with the government of Uganda to support long-lasting peace, stability and security in the Karamoja region.

“This partnership is reflected in the support provided to the Uganda Police Force in Karamoja to build its capacities in community policing and to provide the needed infrastructures to operate and implement its mandate. We all know that many development challenges are still to be overcome but we are also aware that stability and security are a pre-condition for the economic and social development of the region”, he said.

The minister of Karamoja Affairs, Mary Goretti Kittutu said that Karamoja as a region is now opening up and is a key contributor to the overall development of the country and therefore the government has invested in strategic infrastructure in the region such as roads, electricity and security.

“As government, we are going to make sure that we stamp out all the perpetrators of insecurity in this region and have the people of Karamoja live peacefully. As a ministry, we shall endeavour to work with the police in the region to see that they are well facilitated to do their work,” Kituttu assured.

0 #1 rubangakene 2021-09-15 17:20
If they spent the money the EU gave twenty years ago on strong, well-planned infrastructures to address the underlying conditions in Karamoja, these issues of police numbers would not arise.

Next they will be "pan-handling" the same foreigners for money for cameras on every tree and if that fails, they will approach the Russians to "digitise" all the cattle there!
Report to administrator