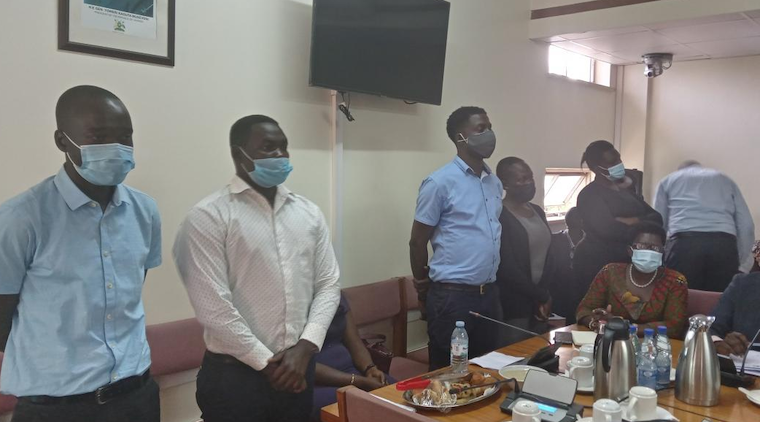 Some of the data entrants appearing before MPs

At least 8 data entrants from Arua city who fraudulently obtained COVID-19 relief cash meant for vulnerable people have apologized and requested to refund the money.

The data entrants were today appearing before the Public Accounts Committee on Local Government chaired by Bardege-Layibi MP, Martin Ojara Mapenduzi alongside Arua city officials. The committee is probing the fraudulent process of registering beneficiaries meant to receive the Shs 100,000 COVID-19 relief cash.

The committee established that the same people who were charged with registering beneficiaries instead chose to register themselves as beneficiaries taking advantage of the system.

Some of data entrants told the MPs that they are just volunteers in Arua city and needed the money because they are not paid a salary. Of the 14 data entrants from Arua city, 8 said they are willing to return back the money and that what they did was regrettable.

Some of the data entrants are Mikail Adam Juma, Shamim Komuntale, John Henry, Donna Munguci, Godfrey Oyimidri, John Dominic and Sandra Fariyo. Each of them admitted one by one that they used their positions to put their names.

"My name is Komuntale Shamim, I registered as a food vendor...am very sorry sir, I apologize I did so but I wasn't supposed to do that...My name is Sandra Fariyo, I'm a volunteer in the audit department, I registered myself as a waitress [I have never been a waitress]." the entrants submitted before MPs.

Committee chairperson Mapenduzi questioned why the whole process was left to the volunteers. However, the city officials said that the task was given to the statisticians.

"There are procedures to follow to recruit staff, you don't just smuggle in people. People who are not formally employed and become in charge. Probably that is why cases of mismanagement is high. Now you have them, they have penetrated your system, they can change names at will. They have paid themselves that is the consequence," Mapenduzi said.

On those who wanted to refund the money to the committee, Mapenduzi said that they have opened up an inquiry with the criminal investigations department of parliament, and people who handle the issue of receiving money will handle it but not MPs.

"Our committee is not collecting the money, our mandate is not receiving the money that you fraudulently obtained. That is not our business." Mapenduzi added.

Noah Kemisi Muzaid, Arua Central Division mayor Arua said it is sad that the data entrants did that, and even refunding the money can not help. He said that sadly the people in charge of identifying data entrants went for the cheaper option in volunteers.

0 #1 kabayekka 2021-09-14 01:46
This sort of up hazard way of running government administration is very unfortunate. It reminds one of the just finished democratic national elections and the video clips that showed such fraud mischief that was done by the Uganda electoral administrators.

And when such complaints were taken to the courts of law, it was later discovered that even the judges were not up to such a job to pass justice! Indeed presently, the only option is for these volunteers to beg for forgiveness!
Report to administrator
0 #2 kabayekka 2021-09-14 13:17
Actually how can one expect any other option? The NRM majority Parliament is indeed saying what it enjoys saying when it discovers corruption in its business with the public of Uganda.

""Our committee is not collecting the money, our mandate is not receiving the money that you fraudulently obtained. That is not our business." Mapenduzi added." It is the media in this country to tell the country how much of the COVID19 fund has this parliament, as its normal business collected, for itself so that it can survive the world pandemic apart from the millions of citizens in this poor country who up to now have not even been immunized?
Report to administrator
0 #3 rubangakene 2021-09-14 16:50
The circus goes on; stealing from the vulnerable; they haven't learnt anything from the GAVI saga (oops, they were too young then). Still what can we do; the "yellow seed" blossoms!
Report to administrator