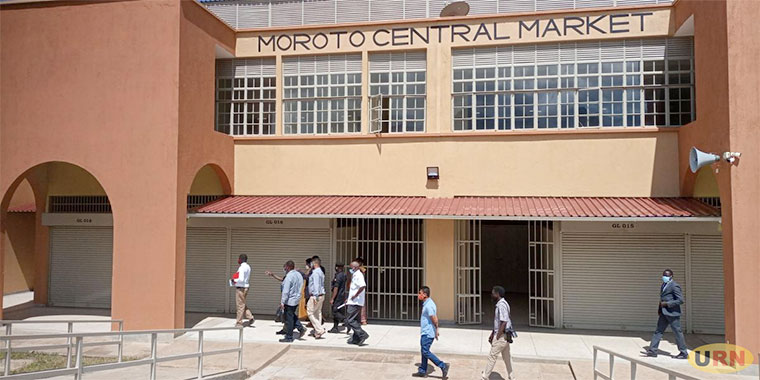 Moroto municipal officials have postponed the date for receiving the newly built market because of unexplained cracks, especially on the second floor.

The government redeveloped Moroto Central Market under the Markets and Agriculture Trade Improvement program (MATIP) with co-funding from the Arab Bank of Economic Development in Africa (BADEA) at Shs 25 billion.

Government handed over the construction works to Ambitious Construction Company Limited in 2018 which was expected to complete the project in 2020. However, the work dragged on until 2021. On Friday, a team of Moroto municipal officials took the state minister for Local Government, Victoria Rusoke Busingye to inspect the market before they could receive it from the contractor.

However, the team was surprised to discover several cracks. Ismail Mohamed, the mayor of Moroto Municipality questioned why the contractor had not rectified the cracks and instead covered them with timber.

“This is unfortunate, these cracks show poor workmanship, and we blame the ministry of Local Government, which has been supervising and they never advised the contractor over these cracks,” he said.

Mohamed noted that they would only receive the market when the contractor rectifies anomalies.

Betty Nakiru, one of the municipal councillors, said receiving the market from the contractor with all the defects is like digging a grave for the people of Moroto.

“We don’t want to experience a scenario like in other places where buildings have buried people. Work on this, if not we will not receive the market,” she said.

Moses Korobe, a local trader, said that they have never entered the new market since the construction started. He, however, said that they have been hearing people talking about the cracks inside the market. Minister Rusoke refused to speak to the media and warned journalists not to produce any story related to the discovery of cracks in the market.

“Please media don’t produce any story until we call you and give you a briefing. We are not here to make comments but to inspect the building,” she said. Officials from Ambitious Construction Company limited also declined to speak to journalists.

0 #1 P. Goldberg 2021-09-13 18:21
What is new! It keeps happening. Where are the site Government Construction Managers. Everything in that country seems to be done back word.

Any 70% completion done by all the steak holders where by line items are documented and corrected?

This is a standard practice in the industry. Well, from what I read and its another one of those tax payers being diverted into someone pocket.

Shame on whoever asked reporters not to write anything about the cracks. In other parts of the world she or he would have no job. Its it called called responsibility people.
Report to administrator
0 #2 Lakwena 2021-09-15 08:47
Just like the Ostriches in Karamoja hide their heads in the sand in Kidepo National Part; in denial, Hon Minister Rusoke has decided to bury his head in the sand too.

Otherwise, depending on the size, cracks develop in almost every building; so, what would be terribly wrong if the media reports about the cracks developing in the Moroto Market due to technical error/problem?

In other words, it is dishonesty and hiding from the truth, which is sinking this country into the abyss of oblivion.
Report to administrator
0 #3 Henry Baisi 2021-09-15 20:12
The world is moving fast and we are playing catch-up.

We need markets but today's markets do not need to be physical bricks and mortar.
Report to administrator