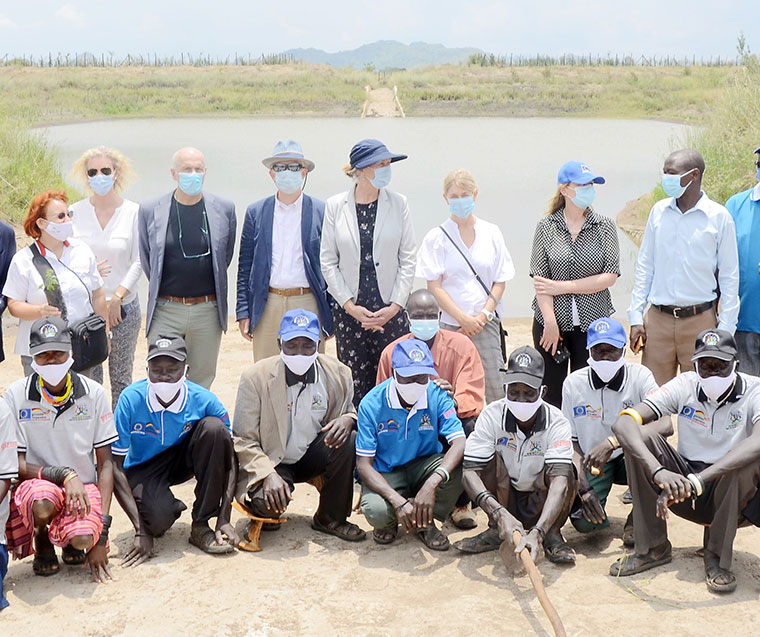 The increased cases of cattle rustling in the Karamoja sub-region by the neighbouring Turkana tribe from Kenya as well as intrigue amongst the Karimojong has rendered the water valley dam built in Kaabong district inactive to serve its intended the purpose, writes ERNEST JJINGO.

Many local communities in Karamoja have been left with few or no cattle at all which would be using these valley dams as drinking places especially during the dry season.

This was discovered during a five-day tour in the sub-region by the European Union (EU) delegation to Uganda, which was assessing progress of eight valley dams the EU and its partners are constructing in the Karamoja at a cost of 11 million euros (Shs 46 billion).

Led by the EU ambassador Attilio Pacifici, they visited Nadwaramukuny valley dam in Kaabong but were shocked to learn that the multimillion dam is not serving its intended purpose of providing water to cattle.

According to the German ambassador, Matthias Schauer, the dam was intended to provide 15,000 to 20,000 cubic litres of water for cattle.

Joseph Tikol, the LC III chairperson of the Kakamar sub-county in Kaabong, said although they were excited about having a valley dam in their area, the fact that they cannot now use it due to lack of cattle is disappointing.

“By the time this valley dam was finished in May, 2020, we had over 8,000 cattle but all these have been raided by our neighbours of the Jie tribe and presently, we don’t have any animals in our sub-county. The animals now using this valley dam are the elephants from Kidepo Game Park.”

Tikol further noted that there have been three recent major raids on their cattle between February, 2019 and June, 2021, a period in which about 8,000 cattle were taken.

“The government had recently helped us to recover 60 herds of cattle but in less than a week, the raiders came back and took them. We are very vulnerable and we cannot protect our cattle because the government disarmed us yet the Jie conspired with the Turkana and hid their guns in Kenya which they are now using to steal our cattle,” Tikol added.

The residents now want government and the EU to consider putting the dams to other uses such as irrigation so that they can at least engage in farming.

“Instead of the valley dam being idle because we have no cattle, we can use it for irrigation. We request to be given irrigation systems so that we can cultivate vegetable gardens around the dams. Cattle were our main source of food and now that we no longer have them, there is a lot of malnutrition which means we need to find other alternative sources of food”, Tikol said.

However, according to Daniel Baguma, the superintendent of Works for Water for Production under ministry of Water and Environment, plans are underway to install small-scale irrigation systems on these dams so that the local communities can also utilise the water for farming.

“We are sampling on our facilities to see if we can include small scale irrigation systems on the dams but also more conscious on whether the dams can sustain both the animals and irrigation systems during the dry periods at the peak of water demand,” Baguma said.

In his remarks, Pacifici noted that although the EU is still willing to continue offering support to the Karamoja, there is no point in offering support to something which is not part of key decisions made already by the sub-region leadership and communities.

0 #1 Uhuru 2021-09-14 13:08
Is it just the dam or something else that took EU delegation to Karamoja?
Quote | Report to administrator
Refresh comments list
RSS feed for comments to this post
Add comment