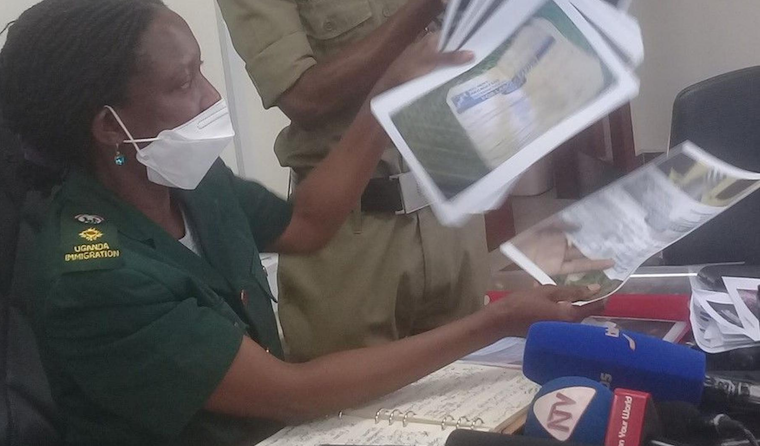 Over 280 youthful Ugandans have lost more than Shs 180 million in an online job scam. The victims aged 18-30 are crying foul after they were defrauded money ranging from Shs 600,000 to Shs 1 million per person as medical and ‘Interpol’ expenses for job interviews in Uganda and Arab cities like Dubai and Abu Dhabi.

The fraud started when a Facebook page dubbed, Reliant Recruiters International (RRI) was created and started announcing quick local and international job opportunities. In a space of less than two months, RRI had received dozens of followers.

Agnes Igoye, who is spearheading the investigations on the side of the anti-human trafficking department at the ministry of Internal Affairs, says by the time the page was suspiciously pulled down a few weeks ago, it had more than 1,000 followers.

Over 200 complaints have been filed by victims at the ministry, Nateete and Nalukolongo police stations. Venis Baguma Tumuhimbise, the coordinator of anti-human trafficking at the ministry of Internal Affairs has tasked Igoye to work with detectives at Criminal Investigations Directorate after it emerged that Nateete and Nalukolongo police stations have reportedly been frustrating the victims.

Maggie Nanteza, one of the victims said they were promised a free visa to Dubai but after reaching RRI offices which were at Makanga House in Nalukolongo, they were informed that they needed to pay for medical tests and Interpol services.

According to some of the receipts which have already been obtained by Igoye and her team, the least amount each of the victims paid was Shs 600,000 on the promise that they were to fly out of the country in two weeks.

But to their shock, RRI bosses who have since been identified as Grace Nankya and Bernard Kyenzeni, stopped picking their calls when the two weeks elapsed. Natenza and others decided to visit Makanga House where they received the bitter news that RRI had shifted to an unknown place.

Igoye and her team have since established that people fell victim because they were promised a monthly salary of Shs 1.5 million on top of a free visa. Many of the victims have indicated that they were working in local companies and organizations but they were laid off during the first Covid-19 lockdown.

“I was working but I lost the job. But when this opportunity came, I visited their offices and I confirmed that they existed. I was attracted by the free visa and the Shs 700,000 for medical and Interpol expenses was not much since I needed a job,” another victim who identified herself as Janie said.

Uganda went into the first lockdown in March last year in a bid to control the spread of Covid-19. The second lockdown was announced in June this year and was partly lifted on July 30.

Igoye has called upon all the victims to come out and record statements that would be of help during the prosecution of Nankya and Kyenzeni once they are arrested. CID team are now working with the ministry of Internal Affairs to have the culprits arrested wherever they are.

“I want to advise the youth if you want to go abroad, crosscheck with the ministry of Gender about license labour companies. Please go to the right places and get the rightful information. Do not leave in secret. Once they coach you to lie to immigration, just no it is a scam. Don’t be duped with free visa” Igoye warns.

Grace Akullo, the CID director, in her 2020 report indicates that Shs 15.9 billion was lost in cyber scams last year.

+1 #1 kabayekka 2021-09-10 15:25
That is the problem of keeping the African masses in ignorance and illiteracy so that the unprogressive African leadership can do their own thing as they so wish.

Online services have come to stay in the normal technology of the human life. It is like what the current saying goes that human life must start to learn to live with the pandemic of COVID19 as any other disease other than getting locked up in doors in the hope that such disease will eventually go away.
Report to administrator
0 #2 kabayekka 2021-09-10 15:40
The point is why has the country of Uganda locked out the famous international Facebook media and yet the unemployed youths of this country have a need to use it to further their life's expectations!

Now that a cyber crime has been committed, how is the Uganda CID going to successfully investigate this crime without the help of the vast technology of Facebook?

Or are these officials going to blame Facebook and its commercial interests on the continent of Africa!
Report to administrator
0 #3 kabayekka 2021-09-11 01:34
Look at the cyber crime of blogger Lumbuye. One can listen to the You tube that is broadcasting President Museveni as being sick and about to die on 7th July, 2021. (https://www.youtube.com/watch?v=Dtofxyy9-eg) Surely one cannot hear the blogger Lumbuye's voice at all.

Calling the digital representative of Google to provide witness is paramount. Unfortunately for Turkey, this country seems determined to keep its Turkish Airways planes flying comfortably in the country of Uganda as Uganda people themselves suffer modern online ignorance and illiteracy!
Report to administrator