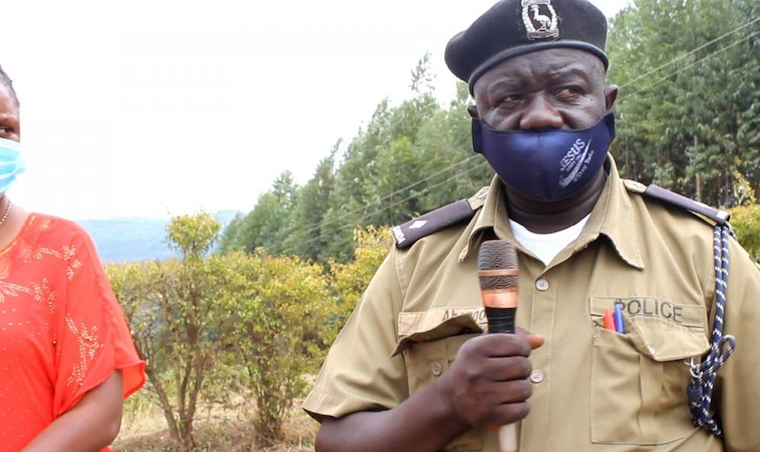 The officer in-charge of Kibinge sub-county police station in Bukomansimbi district has been arrested for sharing information about the security situation in the area with visiting MPs.

“Yes he was called by the bosses that deployed him, and everything is being done administratively,” he noted.

Abongo’s arrest comes a day after the minister for Security, Maj Gen Jim Muhwezi clashed with MPs on the committee of defence and internal affairs. The MPs were in Bukomansimbi on a fact-finding visit about the security situation in the area, following the recent spate of killings that have hit the greater Masaka sub-region.

Abongo shared with the MPs information about the insecurity in the area and the inadequacies that have affected the way police respond to such emergencies.

He revealed to the MPs that the police in rural areas are ill-facilitated and equipped to effectively execute their responsibilities, which sometimes give thugs an opportunity to cause havoc in the community.

However, Abongo’s explanation was cut short by Muhwezi who said that revealing such information compromised the security operations and the ongoing investigations into the murders.

"You're not obliged, you're not at liberty actually, to disclose any information, security information involving the investigation in these criminal matters. Here, when you're talking to members of parliament, you may report but do not compromise the investigation. Members of parliament were told in Masaka that there are no bijjambiya [machete killings] in Bukomansimbi. The RDC told us that the bijjambiya are in Lwengo," Muhwezi said.

The committee chaired by the Sheema District Woman MP Rosemary Nyakikongoro, conducted a public hearing in Bukomansimbi on Tuesday, amidst the growing public fear arising from the anonymous leaflets that were thrown in the area warning of imminent attacks on residents.

+1 #1 kabayekka 2021-09-10 16:05
Of course the officer in charge had to be arrested because he was talking to the Members of Parliament who are in the national difficult job of baby sitting the current dictatorship under such mitigating circumstances in Masaka.

One understands that the House of Parliament provides a budget of about 7 trillion shillings annually to President and cabinet, to maintain national security! As if this poor country is constantly living with African war lords in a war zone?
Report to administrator
+1 #2 Zaitun 2021-09-11 15:19
"You're not obliged, you're not at liberty actually, to disclose any information, security information involving the investigation in these criminal matters... investigation. Members of parliament were told in Masaka that there are no bijjambiya [machete killings] in Bukomansimbi. The RDC told us that the bijjambiya are in Lwengo," Muhwezi said.

So, as the responsible Minister, could one believe that:

i. all that interested you was to see innocent people killed and then blame the ill-equiped police officers for being irresponsible?

ii. that you are aware of what is happening and and why, and fear being acused of helping the killings?

If the triuth is not told to Ugandans by police, who then will tell us poor citizens?

I do not understand why an officer on the ground can be silenced for telling the truth. Yes, like your boss, you guys tell the truth by accident or through your teeth!
Report to administrator
0 #3 kabayekka 2021-09-11 16:16
And Maurice Abongo, an Acholi by African tribe, the Ugandan officer in charge of Kibinge subcounty police station in Bukomansimbi district in Buganda, is being victimised unnecessarily.

Should this gentleman tell lies to the parliamentarians that the lots of money they provide to the national security is easily available to Bukomansimbi administrators to properly do their jobs?
Report to administrator
0 #4 Lakwena 2021-09-13 09:41
Characteristic of an evil person/institution: blame the victim.

Otherwise, how does the facts of an "ill-facilitated Police" compromise the investigation of an organized and/or commissioned serial murder?

During one of Commissions of Inquiry was it Global/Gavi Funds Corruption Scandal; cold-bloody Gen Jim Muhwezi, shamelessly asked Justice Ogoola (Retired) of this country where he was; when he (Gen Muhwezi & Bloody Co.) were committing crimes against humanity in Luweero in order to come to power.
Report to administrator
0 #5 Lakwena 2021-09-13 09:46
In other words, masked with a Jesus' mask; honest Afande, Maurice Abongo is ready for crucifixion!