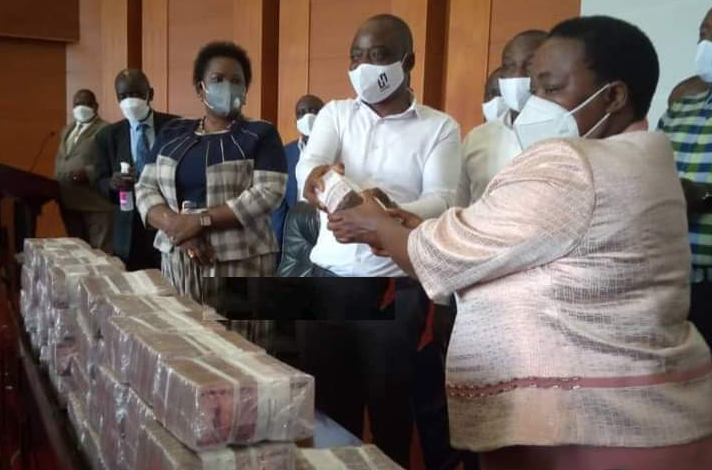 Ugandans are still transfixed by an uncomfortable truth: government officials trusted to superintend the payout of Shs 100,000 to each poor Ugandan, ill-prepared for the Covid-19 pandemic’s financial pain, turned out to be swindlers of the relief funds.

A recent parliamentary investigation found that 20 politicians and eleven city officials in the northern district of Gulu got a cut of the Shs 53 billion government rollout to cushion vulnerable Ugandans against the financial ravages of the 42-day second shut down of the country announced on June 18.

On June 18, President Yoweri Museveni announced a 42-day lockdown of non-essential services and international travel in a bid to contain the spread of Covid-19.

Consequently, government through Prime Minister Robinah Nabbanja announced a payout of Shs 100,000 to each of the 500,000 vulnerable persons identified in each of the 10 cities and 49 municipalities.

The vulnerable group included; drivers, private teachers, food vendors, salon operators and boda boda riders. City and municipal town clerks carried out the verification exercise but ended up on the lists as beneficiaries.

Last Tuesday, MPs on the parliamentary joint committee on Public Accounts, Central and Local Government combed the lists of beneficiaries in Gulu City and found that clerks registered politicians, relatives and in-laws as vulnerable persons.

Interviewed on Monday for this story, Mawokota North MP Hillary Innocent Kiyaga, a member of the Local Government Accounts committee, said the committee found that officials saddled with registering beneficiaries, coached relatives and friends on how to respond in case they were asked if they were vulnerable people.

The MPs visited some municipalities and cities recently and interviewed some of the beneficiaries. They discovered that many beneficiaries were not poor.

“Majority of the beneficiaries were not vulnerable. We could call somebody and find that, that person has many businesses around and he wasn’t entitled to get that money. There were many such cases that emerged and we shall have them captured in our report to the House. Some leaders registered their phone numbers and benefited,” Kiyaga said.

He said some non-residents got money in some cities and municipalities.

“Money for vulnerable municipality and city residents was received by non-residents of those cities or municipalities. People who were not residents in Ntungamo [Municipality] received money... so the whole scope wasn’t that clear,” kiyaga said.

Kiyaga said irregularities were common in Ntungamo municipality, Mbarara and Masaka cities. Committee chairperson Martin Ojara- Mapenduzi (Bardege-Layibi Division MP) read out names of beneficiaries and many turned out to be staff of Gulu City.

Some of the beneficiaries appeared in person before the committee and acknowledged receiving money under the guise of being boda boda riders, salon operators, street vendors and support staff in private schools.

In Gulu City, 11, 618 vulnerable persons were supposed to receive the relief funds but city leaders confessed to having registered politicians, government officials, friends and relatives as the beneficiaries.

Five town agents; Auma Lilian, Harriet Achiro, Lam Denis, Lanyero Nancy, and Lilly Grace Auma who were in charge of registering beneficiaries but instead registered themselves and got money recorded statements.

According to Ojara Mapenduzi, Jimmy Olando Olwoch, the Gulu City clerk, got Shs 100,000. He passed himself off as a musician. Sharon Aringo, a secretary, passed herself off as a boda boda rider and Sunday Ayella registered as a private school teacher.

“These town agents of yours were registering relatives, friends and themselves. And some of them were getting kickbacks to register people,” Ojara Mapenduzi said.

According to the committee, police will pursue all councilors who got money. These include Okidi Oloya, the Post Bank Regional Credit Manager and Leoben Pengere, the Centenary Bank Credit Supervisor in Gulu city. Others to be pursued include Alexander Okidi, a journalist and Gift Piloya, a journalist too.

Moses Otimong, the Gulu City clerk, said he was embarrassed by the flaws in the registration exercise. “Mr Chairperson, I am indeed embarrassed and in public service, it is very clear, if an officer directly or indirectly influences matters contrary to what he or she is supposed to do, that attracts disciplinary action,” Otimong said.

When Bardege-Layibi Town Clerk, Vincent Opio was tasked to explain how the former chairperson of then Layibi division Alfred Oluba got money as a taxi driver, he said they lacked time to verify the list.

Interviewed about the investigation into the fraud on Monday, CID spokesperson Charles Twiine said: “I have personally not been briefed by CID Parliament but since it is a matter of investigations and they are directed by us, let me find out how those files are progressing then in your follow-up reports I will be in position to give you the data.”

+1 #1 kabayekka 2021-09-08 16:20
You see that is what we keep telling the public about the blatant corruption that is become endemic in the current long serving government of this country.

And efforts to lobby for an East African welfare system that can even work in the whole of the continent of Africa seems to fall on deaf ears.

Indeed with such a very well intentioned social project as this one, where the whole world is in real crisis, and money is stolen left, right and center, what hope is there to improve the living standards of many Africans?
Report to administrator
+2 #2 Kijjorooto 2021-09-08 22:42
Which type of society do we have in this Uganda banange? How can misleaders steal $27 or 100,000UGX made for the vulnerable persons?

Uganda has really gone to the dogs, our super UNEB stars and first class degrees are not reflected in society.
Report to administrator
0 #3 Lakwena 2021-09-09 10:31
In other words, the NRM government is a government of Swindlers, by Swindlers and for Swindlers and which why the rest of Ugandans helplessly watch.

After all even the president himself is helpless.

Although he is the King of Bloodshed (Terror), in 2019 and in the accompany of some of the most corrupt in his government; Gen Tibuhurwa took to the street to protest about the level of corruption in his government; hoping the world will come to is rescue.
Report to administrator
0 #4 Uhuru 2021-09-10 12:31
Guys, the answer to such a scandal is simple. Maintain a database of everyone in the country.

Name, age, sex, residence, occupation etc and update regularly. It is quite surprising that in this digital age, we do not have such a database! Strengthen the civil registration system in country.
Report to administrator