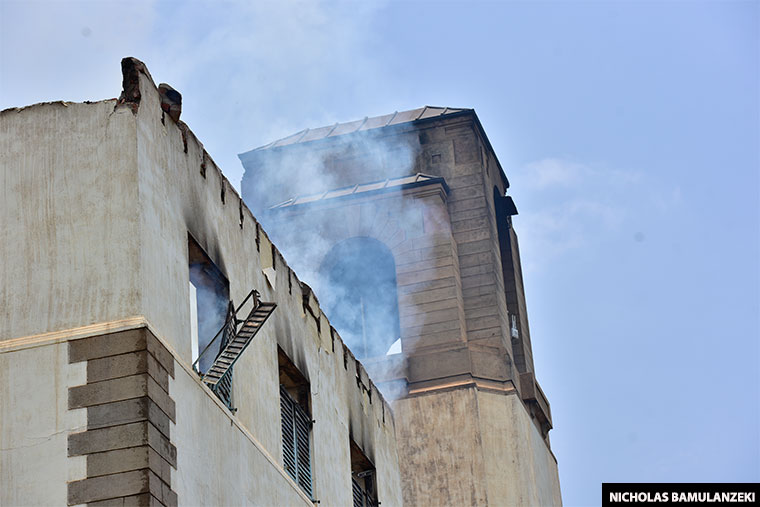 The Ivory Tower on fire earlier

Makerere University is set to divert money collected in donations for the restoration of the iconic Ivory Tower to renovating other dilapidated buildings at the main campus ahead of centennial celebrations next year.

Established in 1922, Makerere University will celebrate 100 years of existence in 2022 as the oldest institution of higher learning in Uganda.

In October last year, Makerere launched platforms to enable willing individuals and organizations to offer monetary contributions for the restoration of the iconic main building that was gutted by fire in September.

Following the inferno, students, alumni and well-wishers called for the expeditious restoration of the building ahead of the centenary celebrations. However last week, cabinet resolved to demolish the structure and allocated Shs 21 billion for the reconstruction of a new building.

Vice chancellor Prof Barnabas Nawangwe says part of the money from the donations will be used to replace utilities in the main building gutted by fire like computers and renovation of dilapidated structures like halls of residence.

He said that other than renovations, there is need for more money towards equipping the reconstructed main building, which they intend to raise from donations. Nawangwe notes that apart from the Shs 3.7 billion donated by MasterCard Foundation to help them recover from the losses resulting from the fire, well-wishers donated more than Shs 10 million.

During the launch of the campaign, the university sought to reach an estimated 300,000 alumni spread across the world, current students, parents and former parents, friends of Makerere, organizations and other people attached to the university.

Nawangwe explains that most of the money that was promised by well-wishers last year, remains in pledges as those willing to support await a fundraiser campaign as was the initial plan. The university is in preparations to hold the campaign in early October this year to reach its target of 300,000 people.

In the meantime, Nawangwe, who is relieved that the government is footing costs for the reconstruction of the main building, says that the university will start the reconstruction process by sourcing a contractor hopefully within two months as they wait for the Finance ministry to avail the Shs 21 billion.

The construction of the main building, which began in 1938, was financed by several sources including regional governments, the Uganda protectorate government and several individuals.

Personally, I don't have any positive experience about this business called Makerere that masquerades as a University.

Someone correct me if I am wrong, but the inferno that consumed that Ivory tower is as dubious as the people running this supposed great institution.

Why would you divert funds for reconstruction??? Reminds me about the great COVID 19 fund diversion that ended up in purchase of pick-up trucks...These fellows underestimate out intelligence.
Report to administrator
+1 #2 Failed State 2021-09-08 01:47
Nawangwe and Co, you are very lucky to have raised just 10m from us. Very lucky. Good luck raising more from 300,0000 alumni.

You will need alot of luck to do that, trust me. And you Nawangwe, are you one of us? Are you a MUK alumnus? If you are not, then you first need to understand what I means to "esacpe" MUK before you begin fantasizing about collecting money from us.
Report to administrator
0 #3 PS 2021-09-08 10:10
Why isn't that money used to complete construction of the perimeter wall?
Report to administrator