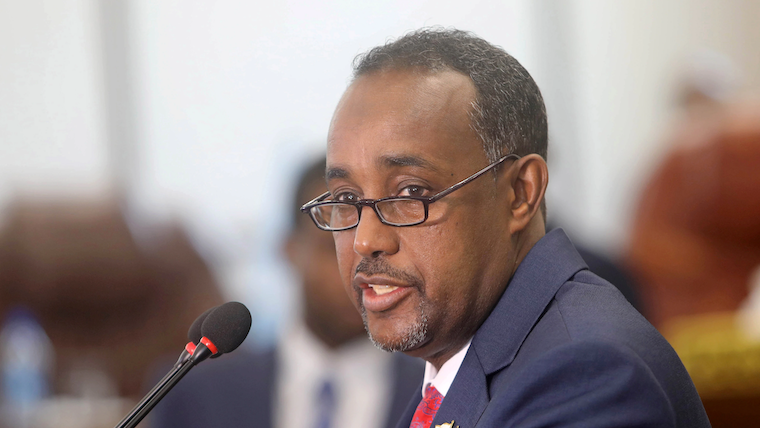 Somalia's president and prime minister were in a standoff on Monday over the prime minister's suspension of the country's top spy chief.

Roble said he was acting because Yassin had failed to deliver a report on the killing of one of the agency's spies, Ikran Tahlil Farah, who disappeared in June and was declared dead by NISA this month.

A few hours later Monday, President Mohamed Abdullahi Farmajo rejected the prime minister's action, saying he has no constitutional mandate to suspend the spy chief, and urged Yassin to continue in his role.

Security analyst Samira Ahmed of the Mogadishu-based Hiraal Institute said it would be helpful for an outside party to intervene to end the escalating political difference between the two highest offices.

If that does not happen, she said, there is a threat of division as the security forces will be obliged to choose between the conflicting orders. She said that would result in security threats to the country and the ongoing elections.

The mother of the slain officer, Qali Mohamud, welcomed the prime minister's move to fire the spy chief and appealed to the president to support it.

She urged the president not to obstruct justice for her daughter by blocking the prime minister's decision, and asked the head of state to put himself in her shoes, as a parent seeking justice for her child.

It's nothing new for a Somali president and prime minister to be at odds over the powers of their respective offices. Muse Ahmed, a law expert at Somali National University, believes there is a need for a clear separation of powers in the Somali draft constitution.

He said the absence of the constitutional court has complicated the recurrent political difference between the Somali president and his prime minister. He added that the appointing powers of the two leaders in the constitution is not clear.

Therefore, he said, there is a need for a new chapter in the draft constitution to make clear the powers of the two, especially during government transitional periods.

0 #1 Lakwena 2021-09-09 07:59
If the Prime Minister can openly disagree with the President and is not sacked forthwith; it means Somalia is afterall more democratic than Uganda.

For the third consecutive election cycle, the Somali people have seen peaceful handing over of power. from one elected president to another.

E.g. the immediate former one president even came to pay tribute and bury Gen Lokeck in Pader. Amidst this development, Somalia administration is under constant threat of the Al Shabaab, trying to make a come back the Al Taliban Style.

In other words, I am green with envy; how genuinely Somalia is becoming a sober democracy.
Report to administrator