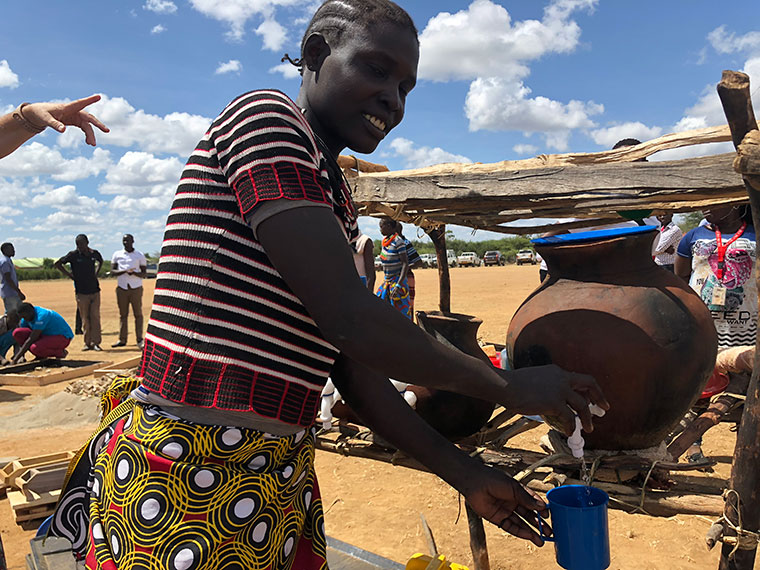 A woman draws water from a pot in Karamoja recently

252 out of 340  (74 per cent) international and national organisations purportedly operating in Uganda's poorest region, Karamoja cannot be traced on the ground.

Richard Omoding, the executive director of Riamiriam Civil Society Network, an organisation that monitors the activities of the civil society organisations in Karamoja sub region, disclosed this in an interview on Friday.

This came a day after the local community in Moroto chased officials of an NGO on Thursday who were trying to claim some activities implemented by other development partners to impress EU ambassadors who were touring development projects there.

Omoding explained to URN that during a mapping exercise they conducted in April this year, they only managed to record the physical addresses of 88 development partners including international, national and local NGOs operating in the region.

"Some times we get shocked when we see organisations running to Karamoja whenever big officials come to Karamoja yet they can't be traced," Omoding said.

He advised development partners to register with the Riamiriam, the NGO umbrella to avoid duplication of activities in the community. John Lomuria, one of the residents, said that Karamoja has become "a ground for accountability" where NGOs run to make accountability after misusing money from donors.

"What's annoying us is that when the European Union delegation plans a visit in Karamoja, you will see different types of cars flooding Karamoja even those that have never been around our villages,” he said.

Betty Angolere, an anti-corruption monitor for Rupa sub-county said there was a need for district authorities in Karamoja to consider doing a headcount for all the NGOs operating in the region to get the actual number.

She also advised the funders to always seek guidance from the local community and leaders before releasing any funding to any development partners claiming to be running projects in Karamoja.

"Come to us and have a brief engagement with us before releasing any money to the particular NGO claiming to be operating in Karamoja," Angolere said.

Otherwise, it is INJUSTICE, which defines the social, economic and political administration of this country. Therefore, blaming NGOs for having gone missing in Karamoja or elsewhere, is missing the point.

It is the responsibility of the government of the Republic of Uganda, to fairy and justly spend out tax money in elevating the standard of living (welfare) of all Ugandans.

But that is not happening. All we see is e.g.: the naked and arrogant self-serving three Arms of government:

1. The Executive (in 2017, the president made a disclaimer saying: he is nobody's employee nor servant),

2. The Legislative (decide their salaries and benefits e.g., Shs.200 million car) and

3.The Judiciary (do not pay taxes and after retirement, the Judges retain their salaries and all the ebiggenderko for life)
Report to administrator
+2 #2 MR 2021-09-07 14:30
So tell us again what exactly is The National Bureau for NGOs in Uganda doing while all this is going on?

Or yes carrying out orders from above/statehouse to close only NGOs that have deemed a problem/opposition to the nrm gov't.

The so called 54 NGOs it clamped down over minor offenses. What is done in the dark will come to light
Report to administrator
0 #3 Benard 2021-09-08 09:47
This is unfortunate but this communicates a bigger problem which is lack of functioning systems in place and no one will set up these systems but government.

So much as we blame the NGOs, government as a regulator has to wake up and play its part justly.
Report to administrator
0 #4 Benard 2021-09-08 09:50
This is unfortunate to read. It shows the quality of humanity available. However blaming the NGOs is missing the major mark-government has a role to play in all this.

This shows that we do not have functioning systems in place. So government needs to step up and provide leadership and this should be just leadership not witch hunt.
Report to administrator