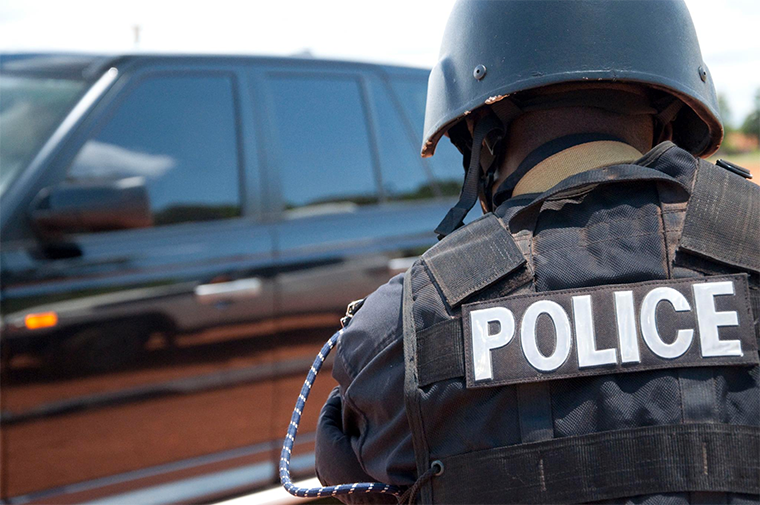 Six police officers attached to the emergency response unit have been arrested for allegedly extorting money from a Danish national for not wearing a face mask.

Police spokesperson Fred Enanga says the six officers extorted Shs 200,000 from a Danish national, Michael Barger who went and lodged a complaint at the offices of the Professional Standards Unit (PSU) in Bukoto-Kampala over the weekend prompting their arrest.

“When our team at the Professional Standards Unit registered this complaint, they took interest and went to the extent of retrieving the security closed circuit television (CCTV) footage from the point of alleged extortion, and these officers who were conducting the operation on police patrol vehicle Number UP4918 were well identified and arrested," Enanga said.

Enanga explains that the six suspects are being held on charges of extortionist tendencies and professional misconduct actions that can’t be tolerated in the police force.

"These are outright cases of professional misconduct that we can longer tolerate," Enanga said. "They claim that the man was moving without a mask everywhere. The man tried to plead with them that he was new in the country, but they went on to extort money from him before letting him go," Enanga added.

Police have since called on the general public to always come out and report such cases of unprofessional conduct by individual officers tarnishing the image of the force. Enanga gave out the PSU reporting line to the public as 0707601052.

In April this year, over 150 personnel were dismissed from the force by the late former deputy inspector general of police Maj Gen Paul Lokech. They were accused of consistently engaging in corruption and indiscipline activities within the force.

I had a similar experience in 2008, on Kampala road, when police officers stopped the car I was in which was being driven by one of my nephews, who had just picked me up from Entebbe Airport.

The reason was that he had used one of those One-way roads , between Kampala road and Nkrumah road near the Uganda house.

I had earlier been at the nearby foreign Exchange bureau and I am sure they had seen me going there.

My Nephew was told that he had to give them UG Sh. 150000, for the transgression, otherwise his car was going to be impounded and him put in prison..

Of course he did not have the money, I had to give them ,the local currency I had got from the Bureau.

If the government people running the so call Covid test labs are getting $65 for PCR Covid test from fully vaccinated people who had their covid test 72 hrs before entering Uganda why can’t the police officers get their share of the cake.

Beside its just a PR. Those officers are put on the streets doing the same thing again.
Report to administrator
+4 #4 Mubiru 2021-09-07 12:15
Enanga says Police took interest to the extent of retrieving security CCTV footage when a Danish national reported 6 policemen who demanded shs 200000 bribery for not wearing face mask.

Its amazingly diabolical that uncountable Ugandans suffer similar predicament yet the kawukuumi police doesn't take same interest because they are Ugandans.

We hear that all people in Uganda including foreigners are equal before the law yet this selective treatment dismantles all these nonsensical claims.

The police were even convinced by the feeble lies peddled by the Danish that he was new in Uganda (implying) where people are required to wear mask.

This excuse of ignorance borders on luck of intelligence in self defence of this man when masks must be worn the world over and are not unique to Uganda.

The police's colonial inferiority complex of treating foreigners as special creatures inhabiting this universe at the cost of Ugandans is beneath civilisation in the year AD 2021
Report to administrator
0 #5 kabayekka 2021-09-07 16:17
That is why the appointing authority in this country must be responsible to refund the money to this Danish gentleman as soon as possible.

Such appointing authority seem to get away with installing such bad characters in the Police Force for many years of their service.

And one is at a loss as the taxpayer of this country to be paying over trillions of shillings in the Internal Affairs Ministry budget, to oil this machine of the police force every other month!
Report to administrator
0 #6 rubangakene 2021-09-07 16:22
These miserable chaps just wanted something for 'marua' and a little left-over for "laluul" (waragi)! Use some common sense please.
Report to administrator
0 #7 Akot 2021-09-07 18:17
Ugandans, why is ending the tribalistic system & UNITY, the only moves needed to end Museveni's hold on the country/tax money, not coming?

Why ensure Museveni's 40 years while waiting for next fake presidential/parliamentary elections to further ensure his 45 years?

Why is the country formed by Ugandans' tribal lands, Museveni's family business while our people are busy helping him destroy, enslave them?

For how long will Museveni live & what will Ugandans do when he dies in post, just go along with his son & the family business will go on & Ugandans will continue fighting/destroying one another?
Report to administrator
0 #8 Akao 2021-09-08 00:28
I am guessing this is news and police officers arrested because it concerns a foreigner. There is nothing anyone can do properly in Uganda without bribing their way through.

It's part and parcel of Ugandan system. Whether one is applying for ID, buying land, or sending their children to a particular school, there has to be bribe, otherwise nothing will happen.

Unless one comes from Uganda, it's not really worth doing anything valuable there. Between bribing and the amount of time a person has to get things done, it's unnecessary headache. The system is rotten to the core!
Report to administrator