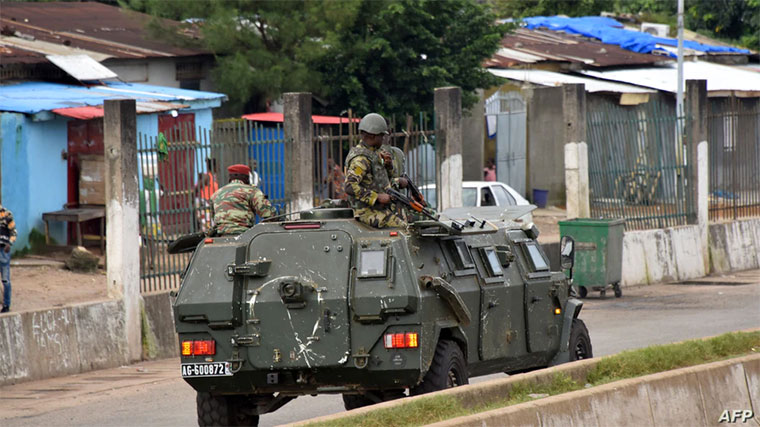 Members of the Armed Forces of Guinea drive through the central neighborhood of Kaloum in Conakry, Sept. 5, 2021 after sustainable gunfire was heard

Soldiers in Guinea said on national television today Sunday that they have arrested President Alpha Conde, dissolved the country’s constitution, and sealed off land and air borders.

A statement from the country’s formal Defense ministry, however, said that an attack on the presidential palace in the capital, Conakry, had been repulsed.

Conde’s whereabouts Sunday was not immediately clear. In October, the president won a third term in office after amending the constitution to allow him to run again. The controversial election sparked violent protests throughout the country.

Agence France Press reported Sunday that it had received a video of Alpha Conde, appearing in a crumpled shirt and jeans, sitting on a couch surrounded by soldiers. Mamady Doumbouya, a former French legionnaire, appeared on national television Sunday, draped in the country’s flag.

"We have dissolved government and institutions," Doumbouya said. "We call our brothers in arms to join the people."

Doumbouya cited mismanagement of the government as a reason for his actions. Fighting was reported earlier Sunday in Conakry, but following the announcement on television, many took to the streets to celebrate what they believed to be a successful coup.

+6 #1 Lakwena 2021-09-06 08:40
I hope this is not the same Guinea where our dictator, Gen Tibuhaburwa has clandestinely deployed some of our UPDF soldiers to prop-up another greedy dictator, Alpha Conde.

In other words, the rhetoric: "the problem of Africa is leaders refusing to leave power" only applies to other African countries, and not to Uganda, whose dictator has been in power for the last 36 years and counting.

But never say never! Anything and everything is possible in Africa, and the AU can do nothing about it.
Report to administrator
+2 #2 Sue 2021-09-07 12:49
The constitution stated a maximum of 2 terms of 5 years each for the office of President but after ruling for 2 terms he went and amended the constitution to keep him in power.