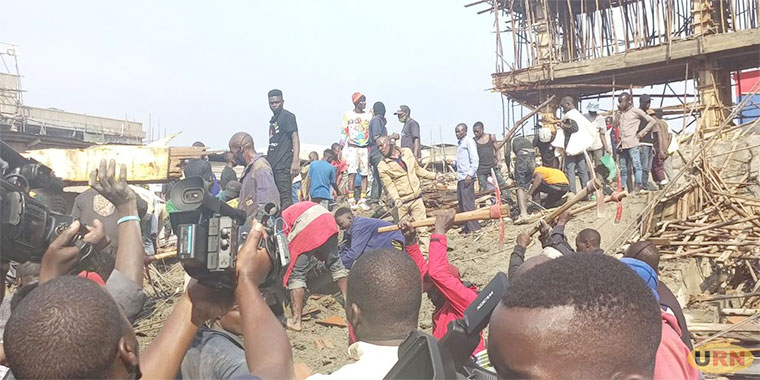 Responders comb through the rubble searching for the victims

Five people have been confirmed dead following the collapse of a storied building under construction in the city suburbs in Kisenyi, Mengo. The building caved in during today's afternoon downpour.

According to witnesses, several people including builders, drivers, food vendors and bystanders are still trapped inside the building. Several people rushed with all kinds of tools including axes, hoes and hammers to try and rescue the victims trapped under the rubble.

The police fire and rescue teams have also joined the search for the victims. Police and the army are maintaining security at the site of the collapsed building as rescue efforts continue.

Salim Uhuru, the Kampala central mayor, one of the first responders at the site, says that more than 50 people could be trapped under the rubble. According to Uhuru, the affected building belongs to the proprietor of Haruna Towers.

He suspects that the building could have caved in due to poor materials used resulting from poor supervision by KCCA. "Buildings in Kampala are collapsing due to weak construction materials, poor supervision and planning by engineers. Our people are dying over this,” said Uhuru.

Hospitals Dilapidated! Kisiraane Applying Psychological War Fare..Machete Wielding Interahamwe running Amok in Karamoja and Masaka..Like He used to Do During Panda Gari in the 80 ties! Ugandans You are Heading to Ground Zero! NRA Is back in its True Colors! Wake Up..
Report to administrator
0 #2 Kalibbala 2021-09-06 22:08
In Construction of Storied Buildings (Kalina) We Make Slab out of Steel(Mitayimbwa) Plus Nkokoto Cement !

This Alone Together is HEAVY!! You can NOT Support All this Weight on Wooden Poles!!

You have To USE IRON BARS IN PLENTY!!..ALL These FAKE Construction Engineers have TO BE arrested and allowed to Build ONLY GRAVES AND HUTS for UPDF..
Report to administrator