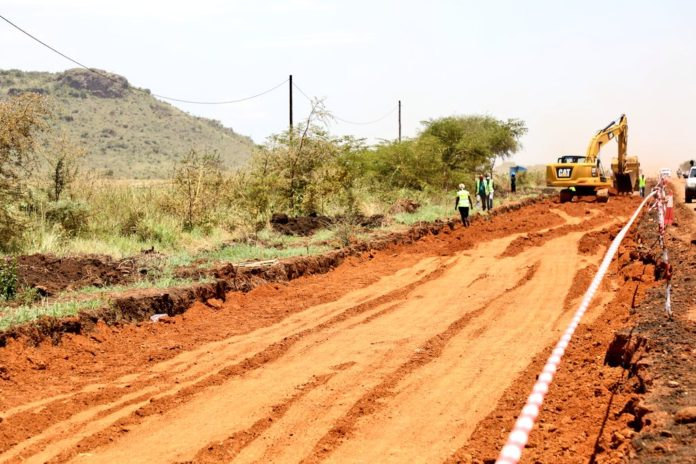 Sixteen months into the commencement of construction of the 92km Muyembe-Nakapiripirit road, there is hardly any tangible progress on the ground as the timeline approaches the halfway stage.

This has cast doubt on the capacity of the contractor, the will of the Uganda National Roads Authority (Unra) and enhanced the possibility of collusion between individuals from the two entities to frustrate the Shs 400bn project.

Government is seeking to upgrade the road into a paved bituminous standard to facilitate the connection between Bugisu and Karamoja sub-regions. In fact, President Museveni has repeatedly said that the road will also link Uganda to Kenya, South Sudan and Ethiopia.

However, in spite of the road’s huge economic potential, tensions are running high on the stalled project, with the biggest concern on Turkish contractor, Polat Yol Yapi, that has achieved only 3 per cent of the cumulative progress of works.

This recently prompted area leadership to voice their frustrations. The situation has been compounded by a whistle-blower dossier to Allen Kagina, the Unra executive director, exposing fraud by the contractor, intrigue within Unra top-level management as well as allegations of sexual exploitation of local women and girls.

When The Observer reached out to Allan Ssempebwa, the Unra public and corporate affairs manager, he promised to get back but had not done so by press time.

At the centre of this scandal is Samuel Muhoozi, the Unra director for roads and bridges development, Unra head of construction and supervision unit Alfred Ogik and Titus Aleper, the Muyembe-Nakapiripirit project manager.

A top Unra official acting as a whistle-blower accuses the trio of being the masterminds of the stunted work on the project.

In a March 29 dossier to Kagina, the Unra official claims the three are bleeding the project clean through collusion with the contractor to defraud the project, using proxies to buy land where the road is going to pass, and undermining Kagina’s work, among others.

Earlier March 16, Kagina grilled the contractors for the delay and instructed them to prepare a recovery action plan with clear actions and timelines on how they intend to recover the lost time. Polat Yol Yapi submitted the recovery action plan to Unra on April 15 and shared with the IsDB.

However, the whistle-blower says the March 16 meeting was just a smokescreen and that Kagina was not given the whole picture.

“Executive director, you had a meeting with the directors of Polatyol on March 16 but prior to the meeting, your staff, including Aleper and team met the directors and the project manager [Edip Yenen] at Skyz hotel Naguru, 10 pm. I believe you can find the footage. They were coached on how to respond to the situation with excuses on why they have not reached the target,” reads the dossier.

Meanwhile, Aleper is accused of altering road designs, recruiting incompetent staff and frustrating the supervision consultant, among others.

“Between the 85th and 90th kilometres, the consultant/engineer had a design but the alignments were changed on orders of Aleper to an extent of an offset of 300 meters to 500 meters without a genuine reason but with an aim of stealing government money in terms of compensation. On top of that Aleper keeps sending people to the contractor to recruit them forcefully. In this regard they are not at times competent for the work,” reads part of the dossier to Kagina.

As a matter of fact, the 92km Muyembe-Nakapiripirit road is one of the most expensive roads in the world because each kilometre costs Shs 4.3bn. So, for Aleper to offset 500m means Shs 2.1bn would be lost through fraud.

The whistle-blower adds that ever since the [Skyz] meeting, Aleper has been defending the contractor for all wrongs he has done.

“The contractor imported old used prefabs for campsite construction and the consultant/engineer refused to approve it but Aleper told the engineer to go ahead and approve it and if it broke down after the construction the contractor will have to redo the work but the question is that at whose expense? What about the time wasted? In most cases, Aleper pushes the consultant against the principle.”

On August 17, key project stakeholders such as the local leadership from Bulambuli, Kween and Nakapiripirit; officials from the Turkish embassy and Polat Yol Yapi as well as those from Unra met at Muyembe to inspect and address the delayed execution of the project.

For one, Muhoozi confessed to the meeting that Unra has not done enough inspection to assess the progress. He further assured the meeting that whereas Polat Yol Yapi was behind schedule, the company needs to be given a chance to finish its job within the remaining 20 months.

During the meeting, local leaders raised issues of sexual harassment of female workers and unfair termination by Polat Yol Yapi officials. The same issue was also noted by the whistle-blower, who claimed that James Lokoru, a brother to Aleper, sleeps with women before giving them jobs.

“Must you seek for sex in order to employ local women? We must get serious with this. This has been happening here,” said Soi MP Kisos Chemaswet.

“When people demand their pay after being employed, they are again terminated, having worked for months, they are not given their dues. How do you expect this worker who has been sacked to pay rent again? How do you expect the owner of the house who gave out his or her house to this staff of yours to survive?”

During the inspection of the works, Polat Yol Yapi was tasked to speed up and finish the construction of the campsite and assembly of equipment.

The Muyembe-Nakapiripirit road is a result of a concessional $112m (Shs 400bn) loan from the Islamic Development Bank (IsDB) to Uganda.

In November 2019, Polat Yol Yapi was selected as the best bidder for the work while Unra also appointed Tunisian firm SCET Tunisie as lead supervision consultant in a joint venture with local firm, MBW Consulting Ltd.

According to the contract, a copy of which The Observer has obtained, Unra advanced Shs 60bn to Polat Yol Yapi to mobilize input resources on top of processing necessary statutory clearances before commencing works.

After four months of preparations to fulfill the above provisions, the parties, including the supervision consultant, set March 30, 2020, as the commencement day for the construction work.

On D-day, coincidentally, President Museveni announced a countrywide lockdown to contain the spread of the Covid-19 pandemic, and it is from this moment that works hit a snag.

According to officials from Polat Yol Yapi, the lockdown disrupted the commencement of work because some key personnel could not travel in time to Uganda and that it was difficult to maintain a full workforce on the site.

However, a top ministry of Works and Transport official who preferred anonymity because he part of the monitoring team on the project, says it was doomed from the start.

“Such loans [from IsDB) come with underlying strings attached on who to contract. That is why Unra went for an unproven Turkish contractor because they are connected to IsDB,” he says.

“It is the sad reality for a developing country like Uganda. That’s why Japanese loans or grants are tied to hiring Japanese firms and the same goes for the Chinese.”

According to sources within Unra, Polat Yol Yapi seized the opportunity of the lockdown in Uganda to divert Shs 60bn to construction works in Kuwait.

“It is a lie that the lockdown adversely affected them because by the time the project supervision consultant gave a go-ahead to commence work, it means the personnel and machines were set,” he says.

“You cannot start work and then complain the personnel and equipment is not here, it means they were not ready in the first place.”

According to sources, Polat Yol Yapi hoped to make a quick killing from the said Kuwait construction project but it got terminated due to shoddy work, leaving the company with no money to start work on the project.

It is for this reason that even when the lockdown was lifted in July, 2020, Polat Yol Yapi couldn’t commence any meaningful work on the road.

Sources further claim that panicky Unra and Polat Yol Yapi officials later took advantage of President Museveni’s election campaign in the eastern region to pretend as though they were waiting for his nod to flag off the project.

Indeed, Museveni ‘officially’ flagged off the construction work in November 2020, six months after it was supposed to have started.

In the Unra-Polat Yol Yapi contract, there is a clause of liquidated liability damages in case the contractor fails to complete the work on time.

This basically means that Polat Yol Yapi would have to pay Unra 0.01 per cent of the Shs 400bn per extra day of work, which amounts to Shs 40m per extra day.

However, our sources say it is practically impossible for Polat Yol Yapi to beat the deadline within the next 20 months. Therefore, Unra is caught between a rock and hard place.

“In order for Polat Yol Yapi to complete the work in time and avoid incurring liquidated liability damages, some Unra officials have urged the contractor to make an additional claim of funds by citing to unforeseen Covid-19 costs and interruptions,” he said.

“The only other option will be for Unra to extend the deadline for completion of work.”

It remains to be seen whether Polat Yol Yapi have the funds to fast-track the project or whether Kagina will provide them another advance payment in spite of the damning state of affairs on the road.

Meanwhile, details remain scanty about Polat Yol Yapi’s recovery action plan but one thing for sure is that barring a miracle, the Muyembe-Nakapiripirit looks set to be doomed with more scandals.

They have a backing of some top Government officials. No wonder they have only built a cam for 16 months, they have only negotiated for the purchase of the rock but have not paid a single penny.

Before long, they will run away and leave their camp for the UPDF. Infact the camp was built for the UPDF just like the one that was built by Saline for Bujagali Energy Ltd. Somebody has stolen all the money lent to us by the Islamic Bank
Report to administrator
0 #2 kabayekka 2021-08-31 03:51
But Unra has all along been appreciated by the NRM government in the construction of roads.

So now one wants to know how the Islamic Development Bank (IsDB) to Uganda is going to come to its own decision over this dossier.

The country cannot continue to pay such loans that are wasted in mismanagement of such very important national projects.

That is why when this country gets a change of government, such loans must be cancelled out for the people of this country not to appreciate them!
Report to administrator