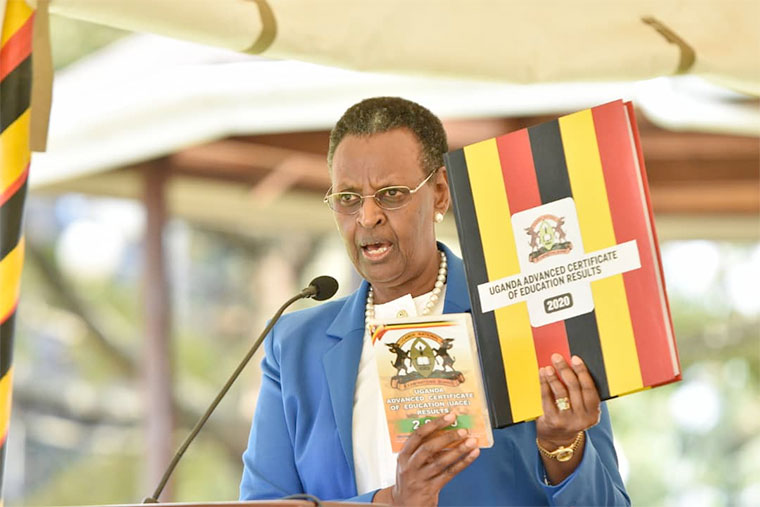 Female candidates have once again significantly performed better than their male counterparts in the just-released 2020 Uganda Advanced Certificate of Education (UACE) examinations results.

While reading the results at State House Nakasero on Friday, Uneb executive secretary Dan N Odongo said that female candidates although fewer, performed better than their male counterparts at the upper levels of 3 and 2 principal passes.

“The females performed better than the boys at higher principal points from A-E especially in Arts subjects, Mathematics and Physics while percentage passes at lower levels and failure rate among female candidates were lower than for the males,” Odongo said.

However, female entries for the Sciences and Mathematics have remained far lower than that of the males. Only 26.7 per cent sat for Mathematics, 6.9 per cent for Physics, 13.2 per cent for Chemistry; and 12.3 per cent for Biology.

The chairperson of Uneb, Prof Mary Okwakol said that the drop in candidature affected mostly the male candidates where they decreased by 6 per cent slightly worse than the females at 5.6 per cent.

She said that according to the study conducted by Uneb to investigate the causes of this significant drop in overall candidature, it revealed the same reasons as for 2020 Uganda Certificate Examinations (UCE).

“Some private schools failed to reopen and the students and the students also failed to find alternative UACE centres. The pandemic also affected the livelihood of many parents who then failed to get school fees for their children while students took on menial jobs during the period of school closure and lost interest in studying. Cases of pregnancies and early marriages of female students were also reported,” Okwakol said.

However, Uneb has registered an overall improved performance in this year’s UACE with 99.2 per cent of the candidates qualifying to be awarded a UACE certificate and join tertiary institutions up from 98.6 per cent in 2019.

“At the minimum two principals level required for university admission, 68,013 candidates (69.8 per cent) qualify, which is 2,290 more than in 2019. In cases where one principal and two subsidiary passes levels are considered for admission to other tertiary institutions, 89.3 per cent of the candidates will qualify,” Odongo said.

According to the Board, there was an overall improvement in performance in large entry subjects like General Paper, Economics, Geography, Mathematics, Agriculture, Chemistry, Biology and History. Although entries for science subjects and Mathematics increased significantly compared to 2019 entries, these are still much lower than entries for Arts subjects.

It is only Literature in English that did not register an overall improvement in performance.

UACE results have been uploaded on each centre portal and heads of the centre can download the results. Hard copies of the results will be available from UNEB Ntinda offices when the situation becomes more favourable and all centres will be informed accordingly.

The Board noted that number of heads of centre have not been keen on cross-checking the results of their candidates and sending queries/amendments in time. They, therefore, advised them to do so and personally submit their queries/amendments to the Board electronically through their portals not later than fifteen working days after the release of the results.