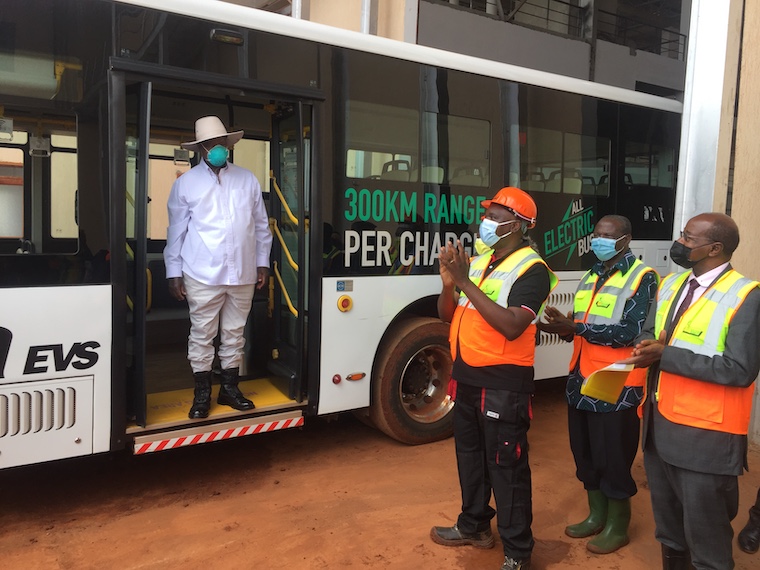 “A motor vehicle industry is an industry of industries, if you establish it, it can potentially result into 300 factories, manufacturing vehicle parts locally and employing over 100,000 people. We intend to skill our artisans in Katwe to manufacture motor vehicle parts for export since we can’t consume all of them,” Kiira Motors chief executive officer Paul Musasizi said.

“It’s against this background, that we envision having a sustainable motor vehicle industry that will produce 500,000 vehicles annually by 2030, here in Uganda. Our intention is to ensure that many vehicle parts of buses, pick-ups, sport utility vehicles (SUVs), tractors and others are made locally here by Ugandan scientists,” he said.

He said a typical vehicle has 30,000 parts, which are grouped into seven areas; the engine, gearbox, chassis, suspension, steering and breaking systems. There’s also the heating, ventilation and air conditioning, plus body components like the doors, glass and vehicle control units.

“Experts revealed that the supply chain of 30,000 vehicle parts constitutes 85 per cent of the job opportunity in the plant. This means Kiira is going to employ over 4,500 people in Mutai area only, where it’s situated,” Musasizi said at the weekend during President Museveni’s visit to the Kiira Motor vehicle plant site in Jinja Industrial and Business Park.

The plant, projected to be complete by December 2021, is seated on 100 acres. It is built by the UPDF’s engineering brigade. The vehicle plant will be the largest in East and Central Africa with the capacity to produce 22 buses per day and 5,000 a year.

Kiira Motors has developed two bus platforms, which include; Kayoola Electric Bus, with a range of 300km on a single charge and Kayoola Diesel Coach. Museveni said Uganda made three big mistakes, which include; squandering money on European goods, giving out Ugandan jobs to Japanese to make vehicles and not selling anything in the huge world wealth market.

“Uganda spends over $550 million each year on importing vehicles from Japan and Europe. All the money we get from selling coffee, which is about $500 million, goes back to Europe through the importation of second-hand vehicles yet they cause diseases like Asthma,” he said.

“I support our vehicle plant to make cheap cars from here than importing expensively with the burden of transport costs and forcing our people to buy expensive products in order to pay for the high cost of living of the Europeans,” Museveni said, after laying the foundation stone at the Kiira motor vehicle plant in Jinja.

“China uses low cost of living to become a big manufacturer. This is why Chinese products are cheaper because their salaries are still low compared to Europeans. We are disadvantaged in everything, we don’t use our raw materials, and all these are mistakes. I appeal to people to wake up and avoid these mistakes to help our people,” Museveni said.

He saluted UPDF’s construction unit, which is cheaper, not profit-oriented yet private companies work for 20 per cent profit, and borrow money at 24 per cent interest rate to construct buildings.

“So from the beginning, private companies have like 50 per cent, which has nothing to do with work but to pay bank interest rates and interests of private companies. This is why I am determined that the UPDF construction brigade will continue to do most government work,” he said, warning UPDF against sub-constructing workers.

“Since we are getting out of sleeping, what is the strategy? No more importation of fully built buses. No more assembling from outside the country? We want all buses to be fabricated here. You bring some parts like the chassis but others are made from here,” he said.

Musasizi said 50 per cent of the price of an electric vehicle is in the battery. He said Kiira Motors is working with Uganda Development Bank and Makerere University to develop capacity and manufacture electric vehicle batteries locally since we have cobalt in Uganda.

“Our intention is to ensure that as far as buses, lorries and trucks are concerned, in eight years from now, we are making 65 per cent of their parts locally…,” he says.

Musasizi said they created over 500 jobs in Mutai area, where the vehicle plant is established and some of the jobs include carpentry, steel venders, window fabricating, concrete and brick makers.

“We found most people here growing tomatoes, which wasn’t a bad idea, but they are now working in this industry and their income has improved. The construction of this factory has ploughed back Shs 28bn within a period of 30 months in procuring materials for construction such as sand, steel, murram, hardcore,” he said.

Musasizi estimates that in five years the central government will collect Shs 200bn and the local government Shs 61bn from the vehicle plant. The plant will start its production of buses by the end December 2021, where Kampala alone will need 7,000 buses with a replacement cycle of eight years.

He does not understand what are really involved in mechanical engineering.
Report to administrator
-2 #12 kasede 2021-08-20 10:26
Quoting Lakwena:

.... That given, I congratulate the president for his unusual / rare long-term look into our future. .... Dear Mr President, let your Promise be a PROMISE in this one.

But kasede, since when are conmen and organized criminals congratulated for doing anything honest?
....

My Dear, I congratulate and I give complemnts and I apologize to whoever, wherever, and whenever they are appropriate.

Further, my earlier posting seems to have been too well wrapped (oboye aber twatwal) for you to understand the content. UPE also !!!! Please accept my sincere empathy & sympathy with you regarding this case. [Jo okano nyar-re ba!!]
Report to administrator
+4 #13 rubangakene 2021-08-20 15:08
How come we are still importing sufurias/ saucepans, hoes, nails, mabaati, razor blades, toilet paper and many other essentials? Get real!
Report to administrator
+1 #14 Jorogo Peter 2021-08-21 12:38
did i read buses with plastic chairs for the buses?
do we have plans for safety tests such as crush tests, endurance tests etc, or are we just excited?

please ensure the buses reflect quality and Uganda can compete in the region...on we fully support the project as Ugandans.
Report to administrator
0 #15 Akot 2021-08-21 18:21
Quoting Lysol:

Uganda should be tired to listen to a a pathological liar.

He does not understand what are really involved in mechanical engineering.

Ugandans don't care about their living nor that of their kids & all they do is maintain the demon who hates them as right of birth, in power!

Ugandans are just waiting for Museveni, USA, EU, UN to bring more fake refugees, this time Afghans, as Uganda belongs to Museveni & not to the people to whom tribal lands that form the country belong!
Report to administrator
0 #16 Akot 2021-08-21 18:25
rubangakene, understood, but,

Uganda belongs to Museveni tribally, lecally, constitutionally ⁢'s Ugandans who give him this absolute power, so he can do as he wishes!

...since when are conmen and organized criminals congratulated for doing anything honest?

...your would rather escape the hard reality of his criminal failure (widespread and dehumanizing poverty) of 87% of Ugandans and hoodwink with a grand-future sic unsustainable propaganda (vision).

It's like USA, EU, UN bringing Afghans to tribally divided & ruled Uganda as refgees, after peaceful transfer of power!

It took USA 20 years, 4 presidents (G.W Bush, B. Obama, D. Trump, J. Biden) to understand it's not foreign might that bring change, but the PEOPLE who need it in their own lands!

But Uganda is home for refugees from lands they left in a hurry, abandoned...!
Report to administrator
12