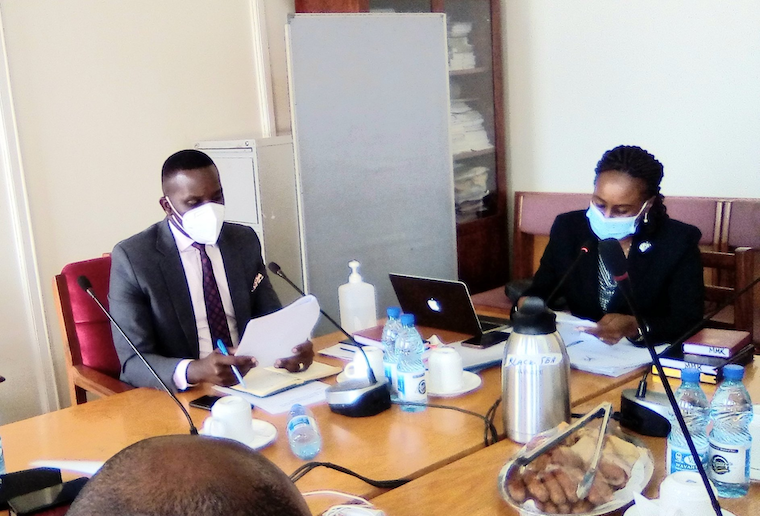 Nakawa West MP and opposition National Unity Platform (NUP) spokesperson Joel Ssenyonyi has protested a fresh election petition filed against him. Ssenyonyi’s lawyers from Pace Advocates led by George Musisi, argue that the amended petition filed by Shukla Mukesh Babubhai on May 10, 2021, which they received on Monday evening introduces fresh allegations and came in court out of time.

Mukesh first petitioned the High court on March 19, 2021, challenging Ssenyonyi’s election victory mainly on allegations of electoral irregularities such as under-declaring his votes, ferrying non-registered voters to participate in elections as well as ballot stuffing among others.

"The first respondent/Electoral Commission occasioned irregularities when they presented the declaration of result forms that were not signed or witnessed by the presiding officer and based on the same to declare 2nd respondent/Ssenyonyi a validly elected member of parliament," reads the original petition in part.

Mukesh filed the original petition on the last day of the 30-day deadline for filing election petitions. However, two months after the deadline, Mukesh filed an amended petition on May 10 and only served Ssenyonyi's lawyers on Monday evening.

In this petition, Mukesh raised fresh allegations questioning Ssenyonyi’s academic qualifications for election as a member of parliament. Ssenyonyi ran on the NUP ticket and defeated eleven other contenders after obtaining 31,653 votes.

Nevertheless, Mukesh claims in his petition that on top of informing the Electoral Commission about the irregularities, by the time of Ssenyonyi's election, he was not qualified to be elected as MP contrary to the Parliamentary Elections Act.

According to the records before the court, during his ordinary and advanced levels of education, the legislator passed off as Joel Basekezi. He, however, explains that he was nominated as Ssenyonyi B. Joel to run for election.

Mukesh further alleges that when he wrote to the Uganda National Examinations Board to verify his rival’s academic documents, he discovered that the school campus on his pass slip did not exist according to the year indicated. The schools in contention and St Lawrence Schools and Colleges Crown City Campus.

"That I verily believe that the 2nd respondent/Ssenyonyi committed illegal practices contrary to sections 68 and 72 of the parliamentary elections in connection with the said election personally, or by his agents with his knowledge and consent and approval.

Mukesh through his lawyers wants the court to declare that Electoral Commission and Ssenyonyi contravened both the law and good principles needed in a thriving democracy.

Ssenyonyi’s lawyers led by Musisi told the court that they will seek dismissal of the application when the hearing of election petitions resume, arguing that it was filed out of time. Musisi, who admitted discrepancies in Ssenyonyi’s academic documents said that their client has since sworn an affidavit showing that the person who was nominated and Basekezi Joel is the same.

+3 #1 Lakwena 2021-08-04 09:54
In other words, unless Mukesh is one of regime sponsors and saboteur since he came 7th with with 806 votes in the race for the Nakawa West Seat; of what benefit is the petition and chances; that he will this time around win in the bi-election?

Otherwise, Mr. Mukesh is an idle dreamer and redundant loser. He may end up losing his shirt to Hon Ssenyonyi in the petition
Report to administrator
0 #2 Jacklyn 2021-08-04 11:31
Thanks for ones marvelous posting! I seriously enjoyed reading
it, you may be a great author. I will make sure to bookmark your blog and
will eventually come back in the foreseeable future.

I want to encourage one to continue your great job, have a nice holiday weekend!


Here is my site - Cbd Hemp flower: https://whitedragonbotanicals.com/cbd/
Report to administrator
0 #3 Kalemera 2021-08-04 22:24
People who went to any of the St Lawrence schools should not be MPs, or hold any serious position in this country.

But that is an argument for another day. In this, I stand with the NUP legislator, whatever his name is.
Report to administrator