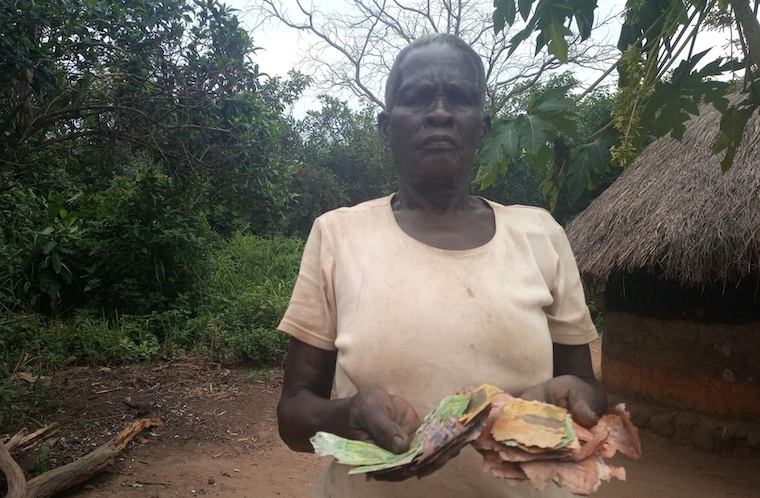 An elderly couple in Amuru district is stuck with more than Shs 1.6 million in notes damaged by termites. 75-year-old Bicentina Alal and her 80-year-old husband Tito Okema, have been saving money in a metallic case for over three years.

The couple who live with their six grandchildren in Kali-Kali village in Layima sub-county opened their savings box in June only to discover that the paper notes had been destroyed by termites.

The damaged notes are in the denominations of Shs 20,000 (35), Shs 50,000 (10), Shs 10,000 (36) and Shs 5,000. Some of the notes are damaged beyond recognition. Alal said that they have been saving their proceeds from the sale of papyrus mats, dried cassava chips, crops, mingling sticks, poultry and domestic animals. He said that they would pick a part of the money once in a while for their medication or supporting their children.

Her husband, Okema, says that left without any other option, they gathered the damaged notes and are now keeping them in another metallic bowl with the hope that someone may come to their rescue.

Okema explained that they neither have bank accounts, sim cards nor even subscribe to the village Saccos where they can safely keep their savings. Asked why they don't own any savings account or subscribe to any group, the couple said that they do not trust anyone with their money.

"It was about one million shillings plus, the money was to help me with sickness and for the children. I cannot now do anything because the money is already spoiled. If it can be changed, I want to be assisted if it can be. Me, I don't have any other work, I am a farmer ever since childhood.’’ Okema said.

Cosmas Apuke, a son of the couple was equally astonished when his parents disclosed and showed URN the damaged notes. He noted that he is yet to find out from the Bank of Uganda whether they can replace the damaged notes, whose serial numbers can be retrieved from their archives.

+2 #1 Lakwena 2021-08-02 12:59
In other words, for the fear of the corrupt systems and ill informed our people are still under the spell of the Lockean and Hobbesian State of Nature.

I just hope the Bank/Central Bank will have mercy and save our old folks saving and replace the damaged Banknotes.
Report to administrator
0 #2 Akot 2021-08-02 14:08
There we go Acholi, your god Museveni will save you!

Acholi tribal leader should beg his chief Museveni to give you the money, develop your land & be prepared to go on when catastrophe like this happens!

Amuru is rich agricultural land & all Acholi need is LEADERSHIP & FREEDOM to administer their land & live as real humans!

What will Acholi do when Museveni dies of old age? Will they worship the demon's son on the wait to take the dad's post & continue to live like beggers, migrants, unwanted dogs on land that should belong to Acholi?

When will Acholi prove Dr Obote was wrong insulting & laughing at them saying they have no leadership & won't know what to do without him?

Acholi tribal leader, mps, elites...GO TO HELL!
Report to administrator
+3 #3 Mweru Samuel Byachi 2021-08-02 16:18
Advise them to take the money to Bank of Uganda if still recognised. To me it is a straightforward case.
Report to administrator
+2 #4 WADADA rogers 2021-08-02 17:43
All is not lost, these elders should push their issue through their MP for the elderly and again through the minister for the elderly to have those notes replaced.

Bank of Uganda is actually under obligation to take the damaged notes and replace them with new ones
Report to administrator
-2 #5 Wainanchi 2021-08-02 17:47
Old foxes are back.!!! Shitting Lakwena and Akot are back with lies and false narratives.

No, Museveni is not God Almighty and cannot help everyone. The same is in any other country But these snakes are spitting poison like cobra at our good man

What Bank of Uganda and any other Uganda bank should do is to swap damaged money and exchange it for good bank notes.

He should help out so that a brand new paper currency is exchanged for this elderly couple.

That is why we have been advising the international financial authority to start printing out plastic currency and throw away that dodgy habit of the USA of printing out paper currency of the dollars for trade all over the world!
Report to administrator
+1 #7 Mubiru 2021-08-02 22:13
When Okema was asked why they didn't put their savings in banks he wisely said that he never trusted any one with money.

In other words termites calling themselves bank staff are the very objects eating th eir meagre savings they are supposed to look after.

Poor Ugandans whose majority are slave wage earners are in serious dilemma with no where to keep their money but in tins.

These termites with plump bellies are eating anything imaginable, edible. The situa tion is exacerbated by over promoted and substandard ministers with no intellectual acumen to run anything or destroy these termites.

Journalism is criminalized for accurately pointing out all these evils of nepotism and tribalism resulting in such hand pickings including acolytes whose qualifications were to kneel for Musevenis extension.

Critics are blackmailed with being enemies of govt when they are only enemies of termites corruption nepotism and corruption. Okema put your money under the pillow and sleep
Report to administrator
+1 #8 Uhuru 2021-08-03 00:00
Observer should have tied the story by asking Bank of Uganda if the damaged money can be replaced. That would make an interesting read.
Report to administrator
+1 #9 Lakwena 2021-08-03 08:53
Quoting Wainanchi:

Old foxes are back.!!! Shitting Lakwena and Akot are back with lies and false narratives.

No, Museveni is not God Almighty and cannot help everyone. The same is in any other country But these snakes are spitting poison like cobra at our good man

What Bank of Uganda and any other Uganda bank should do is to swap damaged money and exchange it for good bank notes.

In other words, Lakwena never lies and dies.