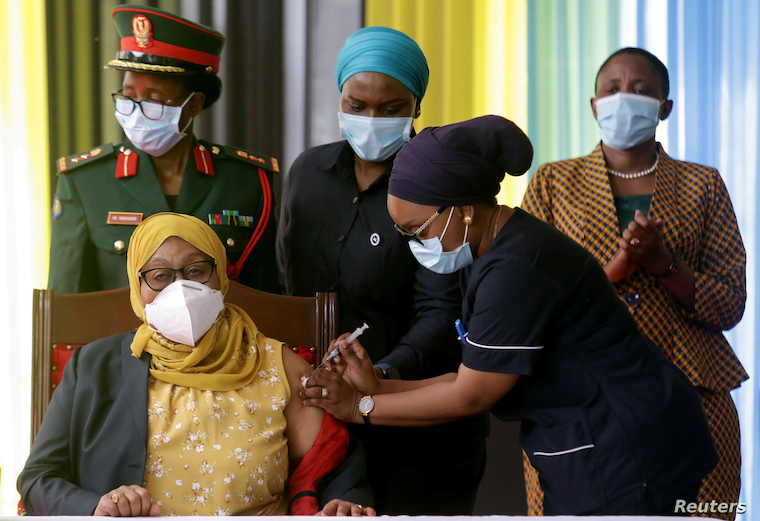 Tanzania's President Samia Suluhu Hassan got vaccinated against the coronavirus Wednesday to kick off the country's first vaccination campaign.

It’s a sharp turnaround from her predecessor, the late John Magufuli, who claimed vaccines were dangerous and that prayer had saved Tanzanians from the pandemic.

In a televised event held at the statehouse Wednesday, Tanzania’s President Samia Hassan launched the country’s vaccination campaign against COVID-19 by receiving her first shot of the Johnson and Johnson vaccine.

The prime minister, chief justice and other top officials also got their shots. The event marks a break with late president John Magufuli, who dismissed vaccines and said God had protected Tanzania from the coronavirus.

Speaking before receiving the vaccine, Hassan said it is safe and that those who are willing to get it have nothing to worry about.

The president said she would not risk her life or put herself in danger while knowing that she has so many responsibilities awaiting her. She said she’s also a mother, grandmother, and wife, and that as the president, she must show this to the masses who are behind her.

"I’m asking all our religious leaders, political leaders, and other leaders from each area in Tanzania to receive this vaccination, encourage and educate others that this vaccine is a modern weapon to slowdown COVID-19 and eradicates it completely, as other diseases,” said Gwajima.

Tanzanian citizens seem to have welcomed the campaign. Ibrahim Maximillian is a Dar es Salaam resident. He says the way the fear is presented, not only in Tanzania but also in the whole world, fear that these vaccines are not safe. Maximillian adds that if the president has dared on the frontline to do that, she has shown that the vaccine is safe.

James Tumaini, a Morogoro resident speaking via a messaging app, said that he believes that the vaccine is safe. Tumaini says there are many who have received the vaccine and reported to have not faced any negative effects.

On my side, I’m ready to get vaccinated and I urge my fellow Tanzanians to also accept it since it has met the criteria of the World Health organization.

According to the ministry of Health, procedures and centers for the vaccination will be announced soon. But the ministry already has said priority groups will include health care workers, hotel workers, emp