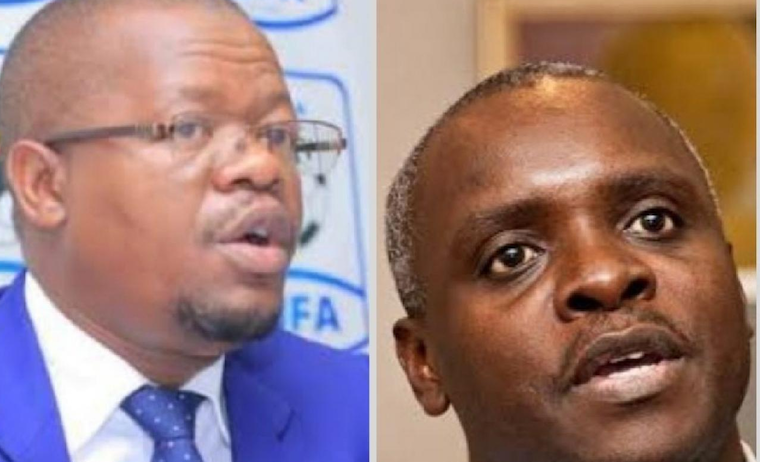 The reappointment of the former Uganda Cranes tactician Milutin Sredojević 'Micho' has sparked a fierce Twitter war between Moses Magogo, the president of the Federation of the Uganda Football Associations (FUFA) and Robert Kabushenga, the former managing director of the government-owned Vision Group.

On Tuesday evening, FUFA announced the reappointment of the Serbian tactician as Uganda Cranes head coach on a three-year contract. The appointment comes four years after resigned from the Uganda Cranes on June 29, 2017, citing nonpayment of salaries for several months.

This morning, Robert Kabushenga took to his Tweeter handle, cautioning the newly appointed gaffer not to cry again if he is not paid like it was the case before.

“Coach Micho, I hope this time you have been paid in advance. Unless of course, you are returning as a volunteer. If they pickpocket you again don’t come here to make noise for us,” Kabushenga said in a tweet.

Magogo tweeted back jokingly asking Kabushenga to provide his account numbers for the local FA to deposit Micho’s pay in case he is much concerned.

“With you as the country head boy, we will make sure that in this new contract we pay him through your bank account,” Magogo said.

This didn’t go down well with Kabushenga, who tweeted back, saying “stupidity is not a badge of honor. It is not a good idea to wear it in full public view. But then again you are far too tone deaf to understand it in normal times you should be in jail & weightlifter Julius Sekitoleko should be an MP. But then God has played a cruel joke on us as a country & it is the other way round. But it takes a special kind of idiocy to make a mockery of it. I give up.”

Magogo tweeted back, saying Kabushenga has no more authority to discuss football.

“There is no amount of literature that takes away the fact that you got overrated for a long time, a FUFA president suitor for the last decade who uses the public institution to fight a football association has no moral right to shamelessly pose certain questions".

Adding that, “It looks like tweeting is your retirement hobby. Dot.com era Jajja [grandpa] does not tell stories around fire places but tweets. Just provide us your bank details to be receiving the man's salaries. Thank you for the good job”

The war between Magogo and Kabushenga sucked in other netizens.  Kakwenza Rukira had no kind words for both men.

Eric Muhumuza @eric_muhumuza said “Not Kabushenga saying "God has played a cruel joke on us as a country" when he was the head of the largest paper that carried water for this regime and laundered its propaganda.”

James Kiyaga said the war between the two perfectly described the effects of the lockdown “the early morning twar and violence between Robert Kabushenga and Moses Mogogo is a true definition of the effects of a lockdown.  Though I think Magogo is trailing by 3 goals to nil.”

“These streets might have forgotten how Magogo elbowed my brother Kabushenga when he attempted to run for the FA presidency. @rkabushenga was more qualified then as he is now. Insulting him and calling him a pensioner doesn't make the man from the east wiser or better,” he tweeted.

The Minister of Agriculture, Animal Industry and Fisheries, Frank Tumwebaaze also joined those commenting on the war, saying “@rkabushenga I will quarantine u in the house & declare u not wanted in that banana.”

David Kabanda @daudikabanda reminded replied to a tweet quoting a well-known Islamic tradition, which requires the good treatment for certain categories of people.

“@rkabushenga and @MosesMagogo Islamic teachings command us to be careful with people who once had power, money and lost them. Kabushenga might have lost one of these two.”

0 #1 Robert 2021-07-29 08:30
Somebody is right here, Micho left/resigned for among others non-payment, and sucking in all and sundry of football in Uganda of the noise Micho made!!

He complained about not being paid and yet he was working under contract and was supposed to pay regularly Kabushega twink with your left eye if I am core t .

Also try to go to any shol take groceries and leave without payment.What would happen to you Kabushega? Could it happen that if you do not pay angry Salman will hit you hard and you will end with black eye !!

You one stupid man! ..Only if you are boda boda man and you take lady passenger and have no money you will get sex,but you WILL BE PAID BUT NOT IN CASH.Hahagahaga
Report to administrator
-2 #3 hussein kato 2021-07-30 02:30
But someone is saying the truth, MM one tym he failed to pay Cranes players who played in Morocco
Report to administrator
0 #4 Mweru Samuel Byachi 2021-07-30 17:56
I too believe it is the effect of lockdown. What comes from Kabushenga is unacceptable due to the rating i had of him. When Magogo steps down from FUFA, the learned lawyer should take over and we get to see Uganda at the world cup.

Otherwise, if Govt has not paid prosecutors and medical workers, what is the news in FUFA anyway? Kabushenga should know that we expect better from him because Micho is not under 18 to be decided for.

The two should again realize that Uganda needs both of them. And then. the rich should know that Ugandans do not eat at their homes and so have no monopoly of knowledge.
Report to administrator