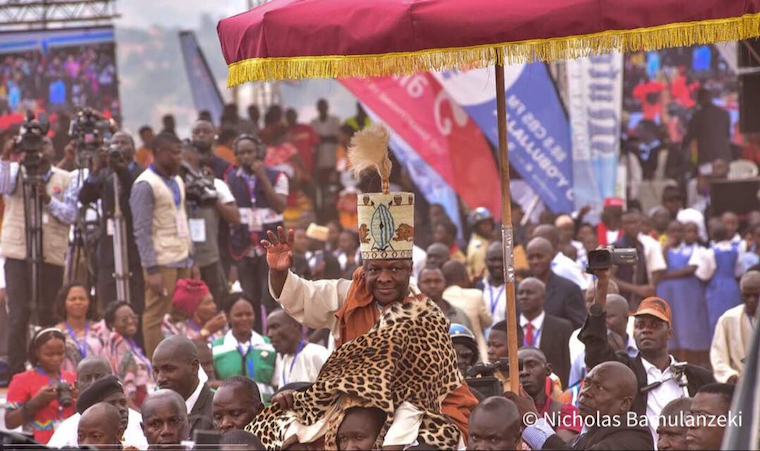 In the 1990s, with many of Uganda’s population dying from preventable diseases, there was need for massive vaccinations.

Many parents and guardians of children looked at vaccinations with a suspicious eye — same way some people look at Covid-19 vaccinations.

The Bazungu, people argued, want them dead. Vaccines, the argument went, had a secret ingredient to stop Africans from giving birth so the Bazungu can take their land. The anti-vaxxers were taking the day and winning the argument. Kabaka Ronald Mutebi appeared in Mawokota and immunized just one baby.

With cameras clicking, the anti-vaxxers lost the argument. The Kabaka loves his people and, therefore, can’t be part of a scheme to kill them. Many parents and guardians who were previously skeptical embraced the vaccination campaign.

As Kabaka Mutebi marks his 28th anniversary this weekend, his influence on health and education has been immense. His role didn’t end with immunizations.

We know much more about fistula and sickle cell disease because of his recent campaigns to create awareness and then find remedies especially through the revived Kabaka Birthday Run that is held every April.

With the Kabaka as UNAIDS Goodwill Ambassador for Male Engagement on HIV/Aids, there is hope that when studies finally come out, there will be much more reductions in numbers of people getting infected by this disease and perhaps have it fully eliminated by 2030.

Kabaka Mutebi has in the last 28 years used his immense political and social power to influence development. Education is important if people are to be healthy and it is only a healthy informed population that can get itself out of poverty.

Of course, this didn’t start with Mutebi, his predecessors pushed for sanitation in homes. Lack of a pit latrines or a rack for utensils was unacceptable — a reminder that Buganda had always put its people at the forefront. But for the 27 years, the kingdom had been abolished, people had given up hope.

His education schemes including bursaries awarded not only to the people of Buganda but to all Ugandans from across the country are perhaps the biggest such programme in the country. Many people today including some that are now becoming leaders got their education through the Kabaka’s Education Fund.

He didn’t stop there, he set up schools, among them a technical institute and a fully-fledged university. Today, through poverty alleviation programmes like Emmwanyi Terimba, we are seeing unprecedented numbers of coffee exports with 618,388 bags of 60kg exported in June 2021 alone. People who had abandoned coffee in Buganda are growing it again.

Most of Uganda’s coffee is grown in Buganda. Where people grow coffee, they also grow matoke, ensuring food security for the region.

Borrowing from CBS FM’s successful Pewosa programme, there is need to organize these farmers at village, parish, sub-county and county levels into cooperatives so they can use their collective power to advance their interests such as owning milling and processing plants and starting exporting companies.

The kingdom budget has increased from zero in the 1990s to Shs 121 billion in 2021. All this growth is having an effect on the region and the country at large. In the last 28 years, the kingdom has set up 33 companies and organisations, which directly employ Ugandans and pay taxes to the government of Uganda thereby contributing to national development.

Although so much has been achieved already, there is so much that needs to be done. The people of Buganda want a modern hospital. Although that may be a tall order at the moment, it is possible.

However, the kingdom could start with telemedicine, using its 18 county headquarters as a base to set up commercially viable clinics and then deploy technology to reach people. Most people, like we have seen with Covid-19, don’t need to visit hospitals.

Doctors and healthworkers can reach them using videocalls and other such options. A lab worker can then go to them to get samples for testing and then medicine is prescribed. A future prosperous Buganda will have to rely a lot on technology to reach people.

Drawing on Kabaka’s experiences of male engagement on HIV/Aids, the kingdom may also need to do some work on the boy child especially in urban areas. Previously, once a boy turned 18, they left their father’s house and went to start life on their own.

That made people prosperous because they used most of their energetic years working hard. Today, many of the highly educated urban male youth are comfortable talkers and not doers.

Owning the latest iPhone has become a yardstick for success. Role modelling for them is important and nobody is more suited for this than Kabaka Mutebi and his team of administrators.

+1 #1 kabayekka 2021-08-01 03:13
Of course there was a time in the history of the country of Buganda when the people's Lukiiko of the State of Buganda advised the Central Government of Uganda to remove itself from the soil of Buganda.

Buganda was fed up with all the unnecessary aggravations that was being thrown at it left, right and center. That was in the year 1966. Unfortunately that self determination still stands up to this day!
Report to administrator
0 #2 kasede 2021-08-01 23:56
Quoting kabayekka:

Of course there was a time in the history of the country of Buganda when the people's Lukiiko of the State of Buganda advised the Central Government of Uganda to remove itself from the soil of Buganda.

Buganda was fed up with all the unnecessary aggravations that was being thrown at it left, right and center. That was in the year 1966. Unfortunately that self determination still stands up to this day!

Buganda is a kingdom. It has never been a country/nation/state and will never be what it, already, is.

M7 resurrected Kingdoms for them (kingdoms) to serve him. Buganda did or was used and is now a used condom.

I wonder, does anybody know how to recycle such condoms safely without going through the Biafran experience. If so, please preach it URGENTLY to the Ganda. I rest this issue.
Report to administrator
+1 #3 Lysol 2021-08-02 02:13
Quoting kabayekka:

Of course there was a time in the history of the country of Buganda when the people's Lukiiko of the State of Buganda advised the Central Government of Uganda to remove itself from the soil of Buganda.

Buganda was fed up with all the unnecessary aggravations that was being thrown at it left, right and center. That was in the year 1966. Unfortunately that self determination still stands up to this day!

Mutebi is not his father's son. He has weakened Buganda by allowing Museveni to walk allover him.

He is weak. like that Obote's son Akena, because of love of money and appeasement.
Report to administrator
0 #4 kabayekka 2021-08-02 18:56
kasede thank you for your information. But history has it that Buganda has been a nation since 1400s when the USA and Australia were not nation states as yet.

The British Empire having acquired the European colonial rights to run the continent of Africa placed the Kingdom State of Buganda as a British Protectorate.

The nation of Buganda was released for its self determination on 8th October, 1962. It was invited to join a federation of 15 neighboring African tribal states as a temporary measure of association 9th October, 1962 (to assess Buganda's suitability or performance with these states). Actually the rest up to now is history.
Report to administrator
0 #5 kabayekka 2021-08-02 19:08
If the young King of Buganda with people like you kasede are now trying to revoke this African history of Buganda, it is very unfortunate indeed.

It is a very common habit of many African people who want to forgive and forget their history in their various African countries. But the country of Buganda is a very cultured nation that cannot do such a thing!
Report to administrator