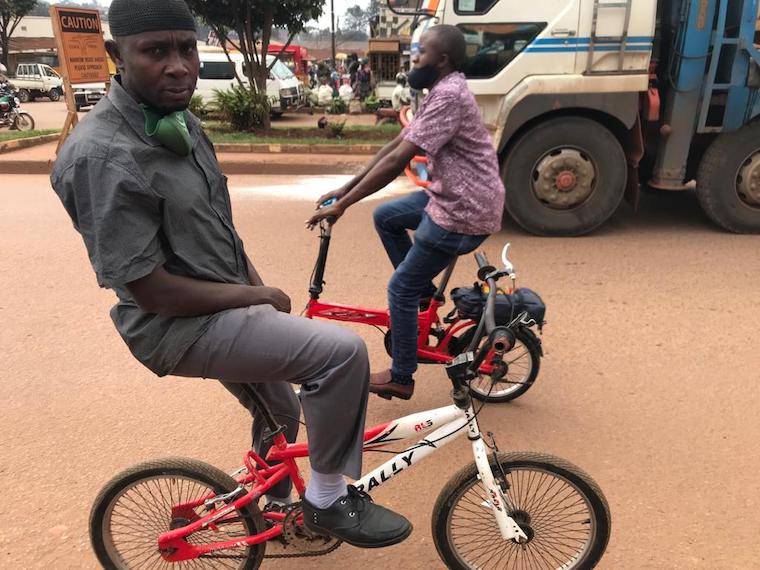 Muhammad Ntege in company of others riding children's bicycles

With Covid-19 well into its second year, a lot has changed about people’s lives, especially as lockdown becomes the one English word now every Ugandan can say.

But few of those changes are as legendary as the fact that more adults, especially parents, are brazenly riding bicycles otherwise meant for children aged 12 and below. You may have seen them – lanky legs and thick beards – peddling down highways and feeder roads on bicycles in sizes and colours only fit for children, especially whenever the lockdown comes with a shutdown of all public transport.

Well, it is not a case of midlife crisis and neither is it a case of fixation – making up for childhood toys they may have missed.

Instead, it is the extent of desperation that a section of Ugandans have undergone during this period of Covid-19, while in lockdown. Muhammad Ntege, a resident of Busabala off Entebbe road, told The Observer how his family was on the brink of starvation during the first lockdown.

Without a lockdown, Ntege on average earned from Shs 20,000 to Shs 50,000 daily from his refrigerator repair business. How was he supposed to meet his clients, when public transport was shut down?

One morning, Ntege picked up his nine-year-old son’s bicycle and decided to go and earn some bread. Ntege had bought his son this bicycle at the beginning of 2020, to ease his movement to school. But now, he had to borrow it as it became their new source of hope.

Ntege said: “Of course I knew that despite this improvisation, I probably would not be able to make as good an income as I used to. In normal times, on a good day I would go home with Shs 150,000 [$42].”

Ntege’s refrigerator repair business is based in Katwe, a stone’s throw away from the city centre, but his Busabala home is almost 8km from Kampala. He has done this work for over 10 years and because of his expertise and experience, Ntege has become popular and highly sought-after; even during lockdown, when most people were at home, they would call him to come fix their appliances.

JUNIOR TO THE RESCUE

But Ntege could not walk from Busabala. He had attempted the trek from Busabala to Katwe, but quickly realized that it was no stroll in the park. His son’s bicycle was the saving grace, and he once rode it from Busabala to a client in Kawempe, 5km from the city centre in the opposite direction!

Circumstances were not any different for John Kalanzi, a land surveyor. Before the current lockdown, he had clients residing in Mbalwa and Namugongo that had booked him for his services. The thought of losing out on the Shs 600,000 he was set to bag from the deals was unimaginable to Kalanzi.

“So, I grabbed my eight-year-old son’s bicycle. I took it to a welder, who added a metal bar to the seat, in order for it to be higher. Then I could ride it to wherever I had to go, to earn some money,” Kalanzi said.

George Ssekabira, a dealer in scrap, also had to ride his ten-year-old son’s bicycle from Kitende off Entebbe road everyday, because it was the only way he could reach Wandegeya, where he sold his metallic scrap for at least two hours.

It was all worth it, he admitted, because he was able to ride back home with at least Shs 20,000 in his pocket. That he looked ridiculous on a child’s bicycle and drew stares and scoffs wherever he passed was of less concern to him. However, that did not come without repercussions. That small bicycle really hurt Ssekabira’s legs.

“Because of the little leg room it allows, every time I reached work or home, my legs and back were in too much pain. But it was better to have a hurting back, because of the low sitting position, than see my family starve to death,” Ssekabira said.

Next Father’s day, men like these ones deserve gifts. Musa Bukenya, a bicycle seller in Katwe, painted the picture that has led to such a state of events in the country.

“Right after the first lockdown was announced last March, I used to sell at least 10 adult bicycles everyday. People could afford to buy a bicycle ranging from Shs 350,000 to Shs 1 million. But now, selling that number of bicycles in a week, would be a miracle. That suggests, people have found alternative measures,” Bukenya said.

That, or the second lockdown has found Ugandans in a worse financial position than the first one, and investing in a bicycle is not a priority; at least, not when Junior’s bicycle is around. When President Museveni suspended public transport, he allowed cyclers to remain on the road, provided they observed standard operation procedures.

Kapeeka Kigozi, a bicycle seller near Nakasero market, said because they are not considered ‘essential’ workers, their shops are closed. So, without any substantial bicycle sales, adults are sharing rides with their children. That aside, it is difficult for one to invest Shs 600,000 in a bicycle, when they do not know when the current lockdown will end.

For many, it is safer to ride their children’s bikes instead. Where one is still able to find a bicycle dealer in business, their prices shot up overnight, making them so expensive and out of range for many people facing high financial strain, since they are not earning but depending on their small savings.

The alternative to many ‘non-essential’ households parents have turned to using their children’s bicycles, a desperate measure to make ends meet. Whereas the white-collar and blue-collared workers have their offices and businesses, many of which are in the service sector closed, even those in the informal sector are under lock and key because of how hard it is to get to places.

So, the next time you see that man criss-crossing the road on his small pink bicycle, don’t laugh; it is just another dad trying to make sure the owner of that contraption has milk and sugar after a grueling day on the road.

Others just ride any bicycle they can lay hands on. Bicycles, unlike cars, are gender-specific; did you know that?

The ones with a high crossbar are for men, while a woman’s or girlie bicycle has no crossbar, or has a dipping one to allow modesty as she gets on and off. Usually, the woman’s bicycle may also have a basket in front of the handlebars.

As the lockdown bites, no one cares about those details; gentlemen are gaily cycling down the streets on bicycles that would be perfect for their wives.

But who is judging when the neighbour rode out on his daughter’s bicycle? We are in the middle of a pandemic!