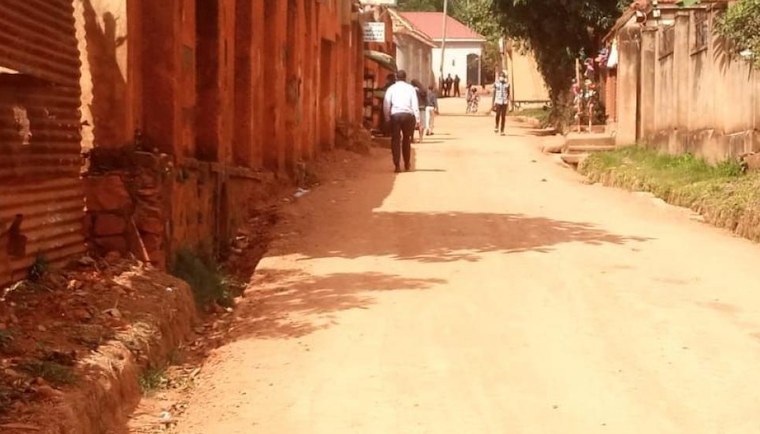 A section of the road leading to Nabbanja's home

The ministry of Works and Transport has succumbed to Prime Minister Robinnah Nabbanja's 'orders' and started construction of the road leading to her home in Bataka Zone, Makerere-Kavule in Kawempe South constituency.

Issuing one of her first executive orders as prime minister, Nabbanja directed the ministry to construct a road heading to her place of abode.

Excited about her new position, Nabbanja who recently was appearing for the first time in public at Kalerwe market ordered for the upgrade of the road to her home "so that even my neighbours can also enjoy, as they are Ugandans."

Following her 'orders', the ministry of Works rushed to embark on the construction, starting with grading the bumpy George Kimbowa road from Bombo road to Nabbanja's house. The graded section makes up close to one-third of the road which is about 300 meters long.

The chairman of Butaka zone, Ibrahim Kibalama says that having a high-ranking government official in the area is already bringing benefits to them starting with the construction of the road.

Kibalama says that most of the feeder roads in his area are in bad shape having long been ignored by Kampala Capital City Authority (KCCA). Kibalama says criminals usually intercept residents using dark bad feeder roads to steal from them during night and early morning hours.

Joweria Nakachwa, also a resident in the zone is appreciative that the road to Nabbanja's home is being constructed. However, Nakachwa who sells groceries at the side of a feeder road asked that their road too be constructed. She decried the amount of dust that comes from the current road and how they are exposed to floods during the rainy season.

Nakachwa wants the authorities to extend the construction to neighboring roads so that there is a proper link from Bombo road to Muganzi Awongerwa road.

Ibrahim Gumisiriza, also a neighbour to Nabbanja asked that the road works be extended to cover the entire road. Gumisiriza who owns a retail shop near the road says that a lot of taxis use the road, especially during peak hours to beat traffic jam. However, the road is too small to allow vehicles heading in opposite directions to use at the same time.

Gimisiriza says government should engage residents whose land and developments could be affected by the construction for them to pave way for the road works.

Another resident, Rahma Namatovu is also excited that the prime minister's order is being effected. Like the others, Namatovu wants the construction to be extended to the road at her place which she says "has been turned into a dust bin by residents who choose to dump garbage on the bumpy road".

Namatovu adds that the road in its current state poses a security threat since it is dark and a hub for criminals. Besides, the road lacks a proper drainage system hence exposing residents to flooding during heavy rains.

+1 #1 rubangakene 2021-07-27 16:03
About time too; the Ministry of Works and Transport has been has been caught sleeping 'like child playing with a new toy "Uganda Airlines".