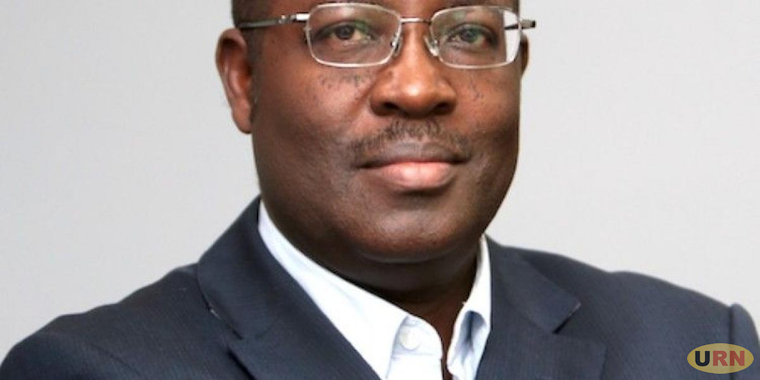 The infighting inside the ministry of Health contributed to the death of Prof Anthony Mbonye, his wife and cabinet secretary and head of Public Service Lucy Nakyobe Mbonye has said.

Mbonye breathed his last yesterday, and according to Nakyobe, the former State House Controller, Mbonye has been battling peritoneal cancer, a rare cancer that develops in a thin layer of tissue that lines the abdomen, bladder, and rectum.

Nakyobe told mourners that the infighting in the Health ministry that pitted Mponye against current permanent secretary Diana Atwine and minister Jane Ruth Aceng started off the long illness that has finally killed her husband.

Nakyobe says as a family, they believe Mbonye's health complications begun from the many public woes her husband suffered at the ministry of Health which precipitated stress and ulcers that later developed into the killer condition that has claimed his life.

However, according to Nakyobe, Mbonye died when he'd already forgiven his tormentors at the ministry where he served as director of medical services before forced retirement in 2017 after being diagnosed with gastric cancer.

About three years ago, Mbonye released a tell-it-all book about the fights in the ministry before it abruptly went out of circulation with many suspecting that the state bought it off bookshelves to create a stockout.

Titled: Uganda’s Health Sector Through Turbulent Politics (1958-2018), the book serves up nearly 156 pages of a scathing critique of the ministry of Health and its officials.

In the book, Mbonye said top jobs at Uganda’s ministry of Health were not awarded on merit but depended on who was closer to the first family and who lobbied best. Mbonye also revealed in the book how top positions were stuffed with underserving political appointees, killing staff morale and leading to resignations of experienced personnel.

During his time at the ministry, Mbonye didn’t have a good working relationship with the current permanent secretary, Dr Diana Atwine. Atwine was the all-powerful head of the health monitoring unit in State House, which enjoyed the patronage of President Museveni.

He was also not seeing eye-to-eye with then director general of health services, now the minister of Health Dr Jane Ruth Aceng. Often, their disagreements spilled into public view and the media.

“In 2008, I had met Dr Diana Atwine on a trip to Cape Town, South Africa to attend a conference on cervical cancer, organised by Princess Nicky from Nigeria. She was accompanying the first lady Mrs Janet Museveni to the same conference and it was the first time I had spoken with her.”

“After exchanging pleasantries, she began complaining about corruption in the health sector and poor service delivery…I didn’t take these allegations seriously at the time since I don’t engage in discussion where no valid evidence is presented. Little did I know that she had been spreading this discourse to justify her appointment as the director of health monitoring unit based in State House. Indeed, her strategy seems to have succeeded and she was appointed as its first director.”

Mbonye also alleged in the book that the job that was given to Dr Aceng had a more deserving candidate.

“Dr Nathan Kenya-Mugisha was interviewed as the sole candidate for the post of Director of Health Services, and he [had] already successfully passed the interview phase. Given his experience, it was assumed that the president would sign swiftly and confirm his appointment, as had always happened,” he writes.

Instead, Mbonye notes that the whole ministry was left bewildered when a junior officer, Aceng, was announced to the position (director of health services).

At the time of his death, Mbonye's physical appearance has severely deteriorated according to Nakyobe.

"He was no longer the man we knew. His body was all gone. He was like a skeleton," Nakyobe said.

Following his gastric cancer diagnosis, Mbonye underwent surgery and chemotherapy to remove all the cancerous cells in his body. The treatment was successful and he was later declared cancer-free for more than a year before he was diagnosed with peritoneal cancer in June 2020 during the Covid-19 pandemic.

During his cancer battle, Mbonye received care from different hospitals in Kenya, Germany, Israel and Dubai. At the time of his death, Mbonye has been receiving treatment at the Uganda Cancer Institute under the care of Dr Fred Okuku.

During his career at the ministry of health, Moboye received many accolades for his work. Mbonye who at the time of his death was teaching at Makerere University as a professor of medicine, has been described as hard-working, loyal and one of the country's most ethical public servants. People who have studied and worked with him, say his zeal to make the county's health sector better is unmatched.

Nevertheless, Mbonye did most of his literary work during his four years' battle with cancer according to family and friends.

Joshua Musinguzi, the programme manager of the AIDS Control programme and also a personal friend who studied with Mbonye at Makerere University, described the deceased as someone who worked even through his illness.

Musinguzi says, even when Musinguzi was abroad seeking treatment, he would find time to chair virtual Zoom meetings. Mbonye's successor at the ministry of Health as the director-general and also a former classmate, Dr Henry Mwebesa described Mbonye as someone who was dedicated to his work and bettering the health sector.

Mwebesa says even during the last two years of his life when Mbonye was in and out of the hospital, he followed the ministry of Health's response to the COVID-19 pandemic.

According to Mwebesa, Mbonye questioned whether the current Health ministry leadership was properly handling the pandemic.

"Mbonye was a highly qualified doctor, a highly qualified professional sought out in the whole world. A very highly qualified person with 5 degrees, there are not very many doctors with those kinds of degrees. Five degrees? That is not a normal doctor that is a specialised doctor. He was generous and actually often you would find very many staff around him and he would also help them," said Mwebesa.

"He was also very courageous even in the spirit of sickness. I recall even last week actually, we were chatting a lot on WhatsApp, he was not good at talking, so we would chat on WhatsApp, and I remember him last week challenging me and asking me; 'But are you sure you're managing this pandemic very well? Is that the best approach you can manage?'. So we kept exchanging. So I thought he was a strong man, I didn't know that he'd become so weak to the extent that when I decided to come and see him, I actually broke down. The person I was talking to on WhatsApp, when I got here, I found he was a very very sick man but that shows you that even in his sickness, the man could engage you intellectually, could challenge you whether what you're doing is benefiting the country or is the best way," added Mwebesa.

Mbonye was one of the county's most published medical authors. He authored or co-authored over 200 papers that were published and peer-reviewed in different fields of health like public health, reproductive health, malaria and HIV/AIDS.

Nakyobe, says that her husband didn't let cancer wear him down. She says after his retirement from the ministry, he spent most of his time writing papers. She said that Mbonye has left behind several scripts that he instructed her to distribute free of charge. Nakyobe says, Mbonye desired death because of the painful cancer illness and treatment he was undertaking.

"He wanted God to put an end to his life much as for us who were taking care of him still wanted him alive. He died a happy man - without any regrets because he said he achieved everything in life that he set out to do. After his cancer operation in 2017, he embarked on finishing all the projects that he'd started on including building a police station, a church and writing several books. He said he'd to use the second lease of life that God had given him to finish all the unfinished business," Nakyobe told mourners.

Described as an academic at heart, with his nose always in a book or medical journal, Mbonye studied his secondary education at Ntare School before joining Makerere University where he graduated with a Bachelors of Medicine, Surgery in 1986.

After graduating from Makerere University in 1986, he worked as a teaching assistant in the department of pharmacology. He later worked as a doctor at Entebbe Grade B hospital before he was promoted to the rank of senior medical officer.

Between 2002 and 2008 when he served as an assistant commissioner, he was ranked number 23 among the most important Ugandans in the country by Daily Monitor for demonstrating leadership in promoting maternal health and research.

In 2011 he was ranked as the best health worker in Uganda for his leadership in fighting the Ebola epidemic and yellow fever. In Uganda Medical Association’s Order of Merit in 2009, Mbonye was honoured for a distinguished career that promoted maternal health in Uganda.

In 2015, he was awarded the Golden Independence Jubilee Medal by the government for his work promoting maternal health and controlling Ebola. During his career, Mbonye accumulated a number of education awards. In 1994 he graduated with a Masters in Public Health from the University of London and a master's degree in Demography from Makerere University in 1995.

Mbonye is survived by a wife, four children and two grandchildren. He will be laid to rest on Tuesday in Rwenkoowa, Ibanda district.

Just like their master Museveni successfully vilified Obote and Amin and of recent tribal chiefs, so have they mastered this evil art.

Shamefully some Ugandans who knew what Museveni was doing chose to cheer him on. Now it’s too late, we are all helplessly stuck.
Report to administrator
+6 #3 Uhuru 2021-07-27 10:02
One lesson I have learnt from losing a loved one is that life is very short. All the fights, accumulation of wealth degrees etc is all for vanity.

When your time comes, you leave all that behind. All that you go with is a wooden box, white sheet and maybe a fine perfumed suit/dress that you have never won but your relatives think you need.

Why don't we enjoy each other's company when we are still alive instead of fighting as if we are on this earth forever?
Report to administrator
0 #4 Elly 2021-07-27 13:27
Quoting WADADA rogers:

Nakyobe, no body fights alone, Mbonye contributed to the fight

By trying to show them the right direction..
Report to administrator