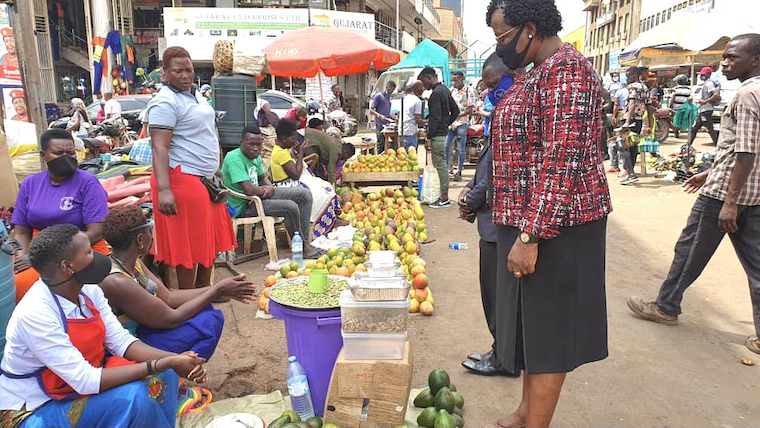 The High court in Kampala has dismissed an application by a section of vendors from Nakasero market seeking orders to throw Kampala Capital City Authority (KCCA) out of market management.

The vendors organized under Nakasero Market Sitting Vendors and Traders Limited, last year ran to court seeking orders of a judicial review to reverse a decision by KCCA to take over the market, an order to re-instate the vendors into market management, and also an order to restrain KCCA and or its agents from interfering with the management of the market.

KCCA repossessed Nakasero market in November 2020 after President Museveni ordered the Authority in September 2020 to repossess all markets and abattoirs, which he said were being mismanaged by private groups. KCCA effected the directive abolishing the management structures then running the market and instituting a new team to work with.

The move prompted the vendors to file an application claiming ownership of the market and the right to run it. The vendors told court that in December 2009, they secured a sub-lease for Plot 4B & 7B Market street, Nakasero market from KCCA and made payment of premium of Shs 1.8 billion and ground rent of Shs 45 million. Also, that they entered into an administrative arrangement with KCCA to collect revenue from the market on behalf of the Authority.

In defense, KCCA said, the Markets Act Cap 94 gives it the mandate to establish and maintain markets in Kampala and that for a private limited company to manage a city market is in contravention of the Act. In April 2010, Museveni issued a directive that the land for the common user facilities within Kampala city be managed by and leased to the vendors operating in it.

But KCCA said that the cabinet decided to reverse the policy and resolved that the government should repossess all public common user facilities. In November 2019, cabinet further decided that KCCA refund the premium and ground rent paid by Nakasero Market Sitting Vendors and Traders Limited with interest and take over possession of the property for proper management.

KCCA hence says they acted on directives of the president. However, KCCA refused to compensate vendors who had acquired lease on its markets saying the markets belong to government.

In his judgement, High court civil division justice Musa Ssekaana dismissed the vendors’ application, saying that it was not a proper case for judicial review based on the facts and circumstances of the case.

He ruled that the transactions the vendors entered with KCCA are purely contractual and based on the private law rights that are derived from the said agreements.

“Contractual obligations should not be enforced by judicial review, unless the question is whether the contracting authority has exceeded its powers. Judicial review should be a remedy of last resort and it is inappropriate where there is another field of law governing the situation.

The application was dismissed without any costs nor was a decision made over the Shs 1.845 billion the vendors had allegedly paid to KCCA.

0 #1 kabayekka 2021-07-27 14:13
If you cannot assist the farmers to market their fresh produce now 35 years in the urban markets, how can you now come out and say that you can help the Uganda farmers with their land tenure systems.

All you have been doing as responsible authority is to hand the farmers and his produce to the market middle men or women to make their profits as much as they want!
Report to administrator