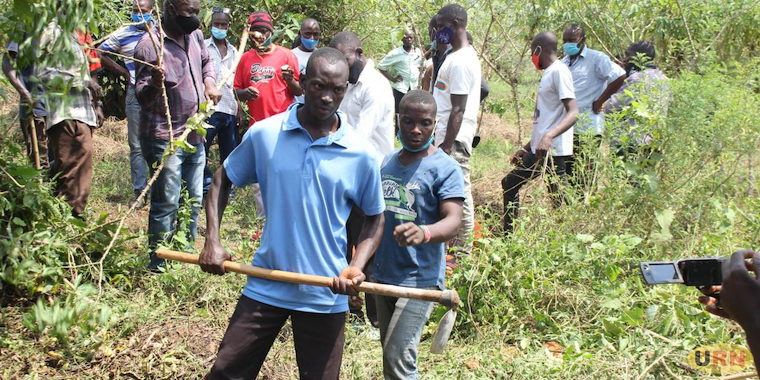 Some of the residents

Rev Mikka Lukwago, the parish priest of Kisowera Church of Uganda in Mukono district today survived being lynched by an angry mob who have accused him of hatching plans to evict them from their land.

The priest was trying to stop Badru Musoke, a resident at Muduuma village from bolstering the family’s ancestral graveyard with cement when other residents surrounded the priest and threatened to burn his car on top of beating him.

Fortunately for him, officers attached to Mukono Police Division managed to reach the scene on time and escorted him away.
Mukono divisional police commander Ismael Kifudde said they arrested five residents involved in the fracas to help police investigate the matter thoroughly.

Several residents of Muduuma village have accused the priest of mistreating them, stopping them from developing the land despite the occupants being bonafide bibanja owners for over 30 years. The government has expressly prohibited any land evictions during the lockdown.

The contested land is approximately 151 acres covering over two villages of Kisowera and Muduuma, whose title is registered under the Church of Uganda Mukono diocese.

Badru Musoke says the priest is forcing residents to surrender parts of their land yet their survival depends on it because it is where they have derived their food and shelter over the decades.

Another resident, Harriet Nansamba says Kisowera church ignores the path of faith and instead pursues earthly gains which has also accelerated their greed for land.

Mukono Diocesan spokesperson Derrick Kaddu says the diocese is closely following up all the matters but he condemned the residents threatening servants of God with mob justice whenever they come out to speak about land.

The Diocesan bishop James William Ssebaggala has always preached against grabbing of church land within the diocese. He has always noted that the church land especially in the district of Mukono, Buikwe and Kayunga has been extensively grabbed.

In 2016, a mob attacked Church of Uganda bishops while touring the Ntawo-Muzingo village land in Mukono municipality and threatened to burn their bus, forcing them to flee for their safety.

When the British and French arrived in our ancestral lands they asked diplomatically for land. Muteesa I warned them that land for the African Ganda is the breast of their mother.

However, they were gracefully rented out land to put up public utilities but unfortunately this has brought about a bad habit of land ownership even when death comes along.
Report to administrator
0 #2 kabayekka 2021-07-23 12:48
The Ganda land that was rented out or leased out for public utilities, such ownership ends somewhere indeed.

Otherwise since the church does not die, further negotiation is possible to the current ancestors of these lands.

Such a situation is made worse because the church is selling church land as if they own it. And the ancestors of these lands are also selling these lands as if there is no tomorrow!
Report to administrator
0 #3 WADADA rogers 2021-07-23 22:54
These religious leaders seem to have forgotten that the church never bought any land, they either got it in form of donations or they grabbed the land that they found attractive.

I know of a certain religious group that went an extra mile and made land titles for all the land they got and took the land titles to a certain country for safe custody. To date, these titles are still kept there.
Report to administrator