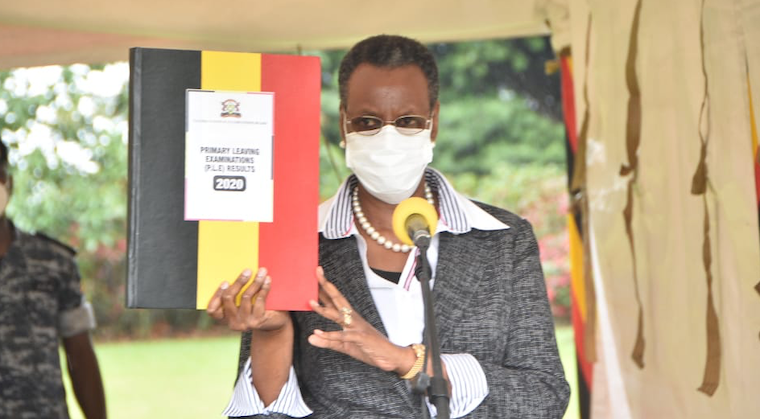 Teachers are at it again! In their latest brush with the law, teachers have been accused by authorities at national examination body, Uneb, of orchestrating a grand scheme in schools that pushes pupils to cheat on the just-released 2020 primary leaving exams.

Speaking at the release of the 2020 PLE results at State House in Entebbe last week, Uneb Executive Secretary, Dan N. Odongo, said although the final examinations were conducted smoothly, scouts and examiners reported a number of cases of external assistance.

“There appears to have been a lot of desperation among teachers in some districts; maybe because of the closure of schools for some time, they felt that perhaps their children had not learnt enough. So, there were many cases of suspected external assistance given to candidates inside the examination rooms by third parties [teachers],” Odongo said. “Are these teachers proud of being back in the limelight for the wrong reasons?”

In accordance with Section 5(2) (b) of the Uneb Act No 1 of 2021, the board withheld results of 2,220 candidates pending completion of investigations into malpractice. This was a dramatic pile-up in cases from 1,512 in 2019.

The largest number of withheld results are from the Rwenzori region, especially in the districts of Bundibugyo and Kasese. Schools whose results are withheld will be notified through their district inspectors of schools to appear before the board’s examination security committee when the Covid-19-induced lockdown is lifted.

Odongo emphasized that after hearings are concluded, the board will publish the list of schools and districts with canceled results. These examinations were meant to be written in November last year but Uneb pushed them to March 30 and 31, 2021 due to the impact of Covid-19 on the education sector.

While Uneb has, to a greater extent, stamped out exam leaks, collusion between invigilators or teachers and candidates is still pervasive. A teacher-cum-invigilator told The Observer that cheating inside the examination rooms is the new normal.

“Odongo has made it extremely hard for schools to get examination papers before exams start especially for urban schools. Currently, school administrations bribe invigilators, supervisors, and scouts to allow teachers cheat freely by writing answers on the chalkboard without any interference,” the source said.

“Unless one of those three parties has not been paid handsomely, they will let the cat out of the cage. It is schools that don’t coach their candidates well [about the cheating tactics] that end up being caught in most cases and results withheld,” the teacher said.

Within such an arrangement, the source added that Uneb finds it hard to prosecute a school or candidate leaning on a single malpractice report of a supervisor because “they [Uneb] know that he/she may want to malice the school yet they often need vivid evidence to back the allegation since supervisors are also teachers from other schools.”

Already, Uneb is investigating three cases of suspected impersonation. The board also noted that in some districts, those assigned to distribute examination materials to examination centres were caught trying to access the contents during transportation.

Security also arrested some distributors in the districts of Nakasongola, and the greater Masaka areas who cut open the exam envelopes to access the questions in transit. Surprisingly, this cheating mode is rife in rural areas where performance is still low.

Uneb findings show that when distributors open the scripts, they don’t share contents with rural schools but sell the exam questions to schools in urban centres. According to Odongo, cheating while distributing exams is a new trend that had been overlooked by the board.

“This is the second year we are observing this. Distributors make stopovers in isolated places and cut the envelopes. They pull out one paper and start taking photos of the question papers to be shared via WhatsApp with interested persons,” he said.

When examination papers leave the Uneb storage centres, they are transported in a single vehicle without a lead patrol car. Uneb had introduced police escorts to strengthen the safety of examinations in transit but unfortunately in some cases, escorts joined the thieving gangs.

The distributors are usually local government education officials and employees and a few people chosen by the district inspectors of schools. Uneb now plans to engage resident district commissioners (RDCs) and chief administrative officers (CAOs) in strengthening the distribution system.

“We want to see how we can vet the people entrusted with this job. What we seem to see is that the vetting may not have been done. Uneb has not been vetting officers distributing PLE papers since we entrusted local governments with this job. We now want to be part of the vetting process by clearly laying out the criteria for someone to be selected as a distributor,” Odongo said.

He urged teachers to be more cautious and professional because the revised Uneb Act, 2021 carries tougher penalties.

Assented to by President Museveni on March 10, the Uneb Act 2021 is now broader on issues of malpractice and its penalties. Under Article 24 of the Act, an examination paper, examination material, any other material and information includes – the electronic version and transmission of the same.

Section 25 (2) of the Act spells out a fine, on conviction, not exceeding two thousand currency points or imprisonment not exceeding ten years, or both a person who willfully or negligently assists or causes any candidate to obtain or gain unauthorized possession examination material. Each currency point is equivalent to Shs 20,000. So 2,000 currency points would come to Shs 40 million.

Where a person under subsection (2), is a registered teacher, he or she shall in addition be subjected to the teachers’ code of conduct. According to the Act, for the purpose of proving an offence under this section, it shall not be necessary for the prosecution to prove that the examination paper, material, any other material or information is genuine or not.

On exam malpractice, Article 26 provides that a person is liable on conviction to a fine not exceeding one thousand currency points (Shs 20m) or to a term of imprisonment not exceeding five years, or both. Previously, the law has been silent on monitors, special-needs education support personnel, invigilators, scouts, and supervisors for negligence of duty because the whole malpractice process focused largely on candidates and withholding or cancelling their results.

During the long amendment process, Uneb had prayed for at least a fine of Shs 10m and a 10-year jail term for exam cheats but Odongo said the new penalty is deterrent enough.

“A law must also not be in such a manner that the judicial officers find it very difficult to implement. If you are going away for five years, that is deterrent enough. This penalty may look small but it is better than paying Shs 50,000 and two years maximum imprisonment in the old Act.”

Commenting on the new law, Education minister Janet Museveni said: “I am happy that the Uneb Act was amended thereby giving the board more functions and powers than in the repealed law. This type of corruption must be put to an end. It is my prayer and hope that when investigations are complete, those culpable will be subjected to the penalties in the law and Uneb will name and shame such schools and districts and the whole nation will get to know them.”

She added, “It is disturbing to note that some of our education stakeholders including teachers are still not heeding our call of desisting from the evil practice of cheating in examinations. I have also noted that some schools and districts are perennially known for cheating exams for their candidates year after year.”

Although new penalties have been prescribed, cheating on exams is here to stay or even get more refined, according to a primary teacher who has spent at least 30 years in the profession.

“I don’t think the new penalties on malpractice will stop schools and teachers from engaging in this vice. Cheating on exams is like corruption in Uganda. The one who is cheated for [parent/candidate] likes it and the one cheating [school proprietor] likes it to stay in business,” the teacher said.

Ironically, the teacher said parents have an upper hand in facilitating the vice though the law will never catch up with them.

“The truth is that schools turned into businesses and parents only understand performance. If it’s not a first grade, that’s a failure to them, especially 4s. So, to keep the business afloat, you have to engage in cheating for the learners. Parents, regardless of the weakness of their children, they want them to pass,” the source said.

The source cited some top schools whose names we have withheld where parents are called in meetings and commit to pay a certain fee for ‘good’ PLE examination results as soon as their children join primary seven.

How can an adult not be ashamed to perform immoral acts against a child who is supposed to look up to them?? This same audacity and shamelessness is reflected in our leaders.
Quote | Report to administrator
0 #2 kabayekka 2021-07-21 15:15
Observer editor you are confusing your messages if they are all true.

Recently you put up a report heading about the Members of the Cabinet or Parliament who were being interviewed for some lucrative jobs in their political business.

Some not all were in the habit of not disclosing their academic certificates. Now today, you are putting up the same report about how there is blatant cheating in exams so that the young people of this country can also get better academic grades and better employment afterwards.

What is causing all this misfortunes in this religious country? Is it God or Satan or survival for the fittest?
Quote | Report to administrator
+3 #3 Danny 2021-07-21 20:55
The biggest of the exam frauds is the one where the media are participants.

School A has 75 candidates. Just before registration, they block 50 of them because they are not sure they will get first grade.

Results come showing all the 15 got first grade. The media proudly displays the school on the front page as the best school in the country.

Parents flock the school to take there their kids, school fees is increased and the cycle continues.

1) Send the exams through a secure online tool just a few minutes before exams for each school to print.

It should be possible to have a printer with a 500k generator in each school. The printing will be done in the presence of Invigilators, with all candidates seated in the exam room.

2) The second option which is probably less practical given our challenges with access to IT infrastructure is to do the exams online.

The exams are uploaded onto the online system just as exams begin. Every candidate would have a password to login and exams timed from the centre. The sections become active at the beginning and are automatically inactivated when time is up.
Quote | Report to administrator
Refresh comments list
RSS feed for comments to this post
Add comment