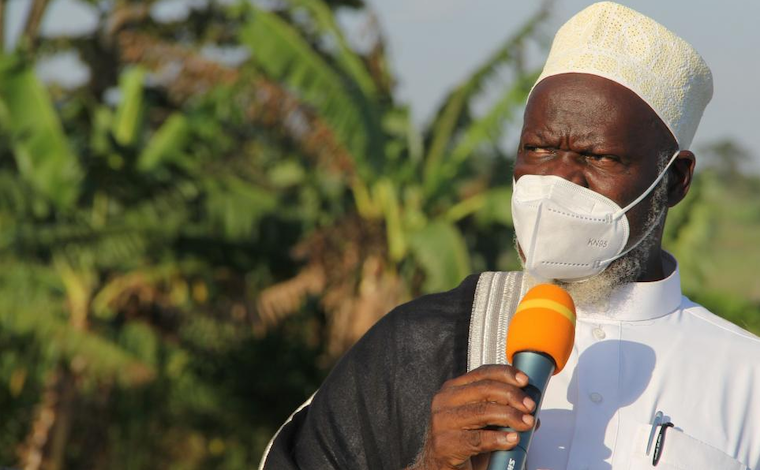 The Mufti of Uganda Sheikh Shaban Ramathan Mubajje has criticized government's distribution of the Covid-19 relief cash to vulnerable persons.

In his Eid al Adha speech at Gaddafi National Mosque in Kampala Mubajje said the cash distribution has been shambolic and is ripe for abuse.

“We thank the government for putting in place measures to assist the vulnerable by giving them cash this time. The cash has not impacted the people…the needy. We desire that this is reversed,” said Mubajje.

He instead advised the government to procure food and deliver it to the households like it was done last year. He said that cash has hardly reached the vulnerable Ugandans compared to food distributed earlier.

"Let us take food to the vulnerable door-to-door as the army did in the last lockdown. The impact was there, people got food and nobody denied that they received assistance. Using cash, there are only a few have admitted that they received cash...so we request the government to revisit or to review the way of helping the needy," Mubajje added.

Earlier this month on July 8 launched the distribution of Shs 100,000 Covid relief cash to vulnerable Ugandans affected by the 42-day lockdown announced by President Yoweri Museveni to interrupt the spread of coronavirus.

Information from the ministry of Gender, Labour and Social Development indicates that the government has so far given out Shs 29 billion of relief cash to vulnerable persons affected by the current lockdown. By Monday, July 19, out of the targeted 501,107 household beneficiaries, 500,900 had been entered into the system and only 207 were yet to be uploaded.

Data indicates that of the uploaded beneficiaries, 289,327 names had been verified, cleared and sent to Post Bank for payment and out of this 278,595 had been paid by Monday. However, 87,603 names submitted to benefit from the Shs 100,000 cash out had been rejected due to different inconsistencies.

Some of the reasons for rejection are phone numbers found not to be registered with telecom companies, were previously unregistered or registered in different names among others. Mubajje also criticized the police for stopping well-wishers from distributing food to starving households.

He said instead of blocking them, they should be guided to ensure that the food is distributed in accordance with the Covid-19 SOPs. Yesterday Monday, police spokesperson Fred Enanga banned the distribution of food to vulnerable people during the lockdown on grounds of contravening standard operating procedures (SOPs) and quality of handouts. The mufti appealed to Ugandans to continue following the SOPs to ensure that the spread of coronavirus is stopped.

“Now we know how Covid-19 infects the person and how to keep away from the infection…so it is upon ourselves to chase away Covid-19. Let’s not place blames on individuals but let’s control ourselves. We shall overcome this situation,” he said.

Mubajje also urged Ugandans to embrace the vaccination exercise, saying it is for their own good. The second deputy Mufti, Sheikh Muhammad Ali Waiswa appealed to Muslims to always demonstrate total submission, commitment to God and love to everyone.

“We have all been exercising fasting; we have been charitable, thinking of others. This kind of thing must be strengthened to build our country. We need to be respectful to our systems…governance systems. That even if there is something wrong, you ought not to use a wrong method thinking that you will correct the wrong thing,” he said.

Sheik Waiswa also preached against the use of aggression and forceful measures like not allowing suspects to be produced in court to be heard. He emphasized the need to respect the commandments of God and appealed to Ugandans to avoid murder, faking of essential commodities and drugs, indecent dressing and other vices.

Sheik Waiswa told Ugandans to have their country at heart and always think beyond quick wealth and other earthly things. He said that by doing this, God will eliminate the Covid-19 pandemic and allow people to go back to their normal lives.

It's more transparent and would have been smoother with a clear avenue to lodge a complaint.

Will we also conduct the next elections using mobile phones? Village chairpersons know their people and would have gone house to house. Yet another way to scheme billions.
Quote | Report to administrator
0 #2 kabayekka 2021-07-21 14:46
Unfortunately some of these Muslim preachers are also very confused as their Masters in Saudi Arabia.

Saudi Arabia as a rich and religious nation has been bombing its poor neighbor, Yemeni an islamic nation, for many years left, right and center as it preaches the great love of Allah!

Why is this Mubajje turning around and stopping this miser government not to give money to the people of Uganda.

This is their money from tax revenue. This government must not be given the next opportunity to go and buy food for the poor and transport it to every door to every door for only once every one or five years?
Quote | Report to administrator
0 #3 kabayekka 2021-07-21 14:59
Most countries these days have what is called a welfare social system that must be in official administration to assist everyday the most vulnerable peoples in their societies with money to go and use it to buy the necessities of modern living.

Uganda should not be an exception. These sensible countries do it without the assistance of such people as Mubajje who seem to be saying one thing about the sky rocketing corruption in Uganda and another thing about the great work of charity this government is doing to the most vulnerable in society!
Quote | Report to administrator
Refresh comments list
RSS feed for comments to this post
Add comment