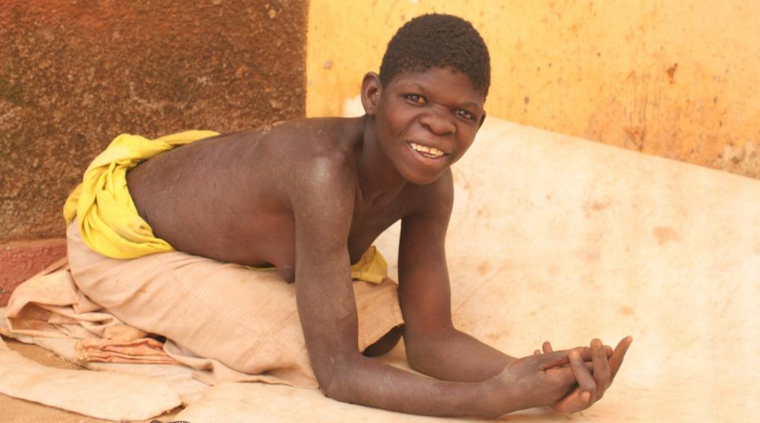 The teenage girl has spent 3 weeks sleeping outside the verandah

A teenage girl suffering from cerebral palsy has so far spent 3 weeks sleeping on the verandah of Mukono General hospital after being forced out of the women's ward due to her health condition that involves uncontrolled defecation and urination.

According to the hospital management, the girl who has no caretaker and is estimated to be aged 10-15 was dropped at the hospital by a boda boda rider who claimed he was going back to the girl’s home to pick the caretaker but until now he has never returned.

Mukono hospital acting administrator Fred Wademe says they are currently stuck with the girl and she requires tight supervision given her bladder and bowel dysfunction that involves defecating and urinating anywhere causing inconvenience to other clients in the female ward.

Wademe says the girl was examined at Butabika National Referral Mental hospital and it discovered that she doesn't have any form of psychiatric disorders but suffers from cerebral palsy changes. She has difficulty in talking and can't any use sign language to help trace her origin.

The girl always wraps herself in a small old tarpaulin every night to beat the cold. Mary Namakula, a janitor at the hospital who feeds her, appeals to any organization with the ability to care for such persons to offer her a new living. The hospital does not have children’s wards for either girls and boys, and whenever in-patient admissions are required, they are instead admitted to the adults’ wards.

According to Wademe, the facility has always been challenged handling such cases since they lack special arrangements for them. He notes that they have always received other children with similar challenges but they have had caregivers.

He notes that they are planning to create space for such purposes at the facility after the completion of the new building under construction.

The facility was elevated by the ministry of Health to the level of a general hospital from health center IV last year in July to start handling cases that require specialized and advanced medical attention due to the increased number of patients flocking the facility.

Moving us from our comfort zones while others suffer.
Report to administrator
+1 #2 kabayekka 2021-07-22 10:53
Interesting social welfare and health story! Politics aside, there is a very interesting government spokes person with some names of OO who is always chasing away human overseas interests in this country.

He has that confidence that the people of Uganda as a country are able to handle all their problems well.

His master and him indulge in this constant African talk that African problems must be left to the African people to solve them. They forget about the biblical story of the Good Samaritan! Or the military general who was sick with leprosy!
Report to administrator