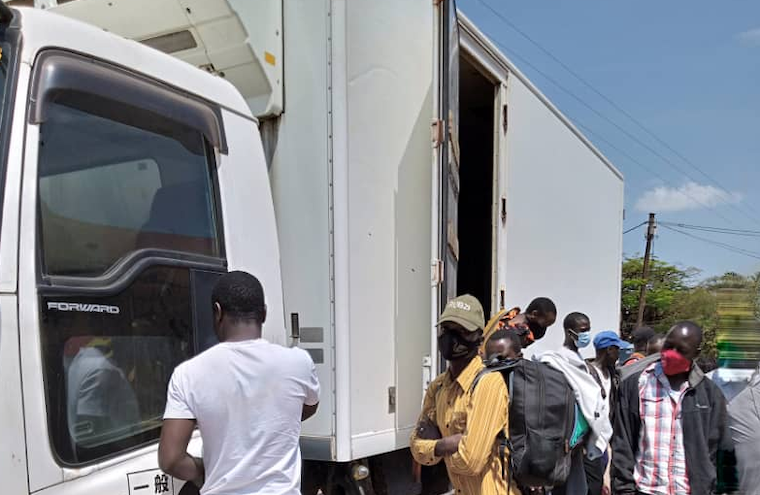 Passengers disembark from the truck

Police have arrested a truck driver Hassan Lubega for allegedly transporting passengers in his closed body truck in contravention of Covid-19 guidelines barring public transport. Lubega was arrested on Monday in Nabingo along the Kampala-Masaka highway.

Kampala Metropolitan deputy police spokesperson Luke Owoyesigyire says that Lubega who was driving a truck registration number UBJ 803P was intercepted as he was carrying passengers to Mpigi, Masaka and Mbarara.

Owoyesigyire says that the truck was intercepted after CCTV cameras captured it dropping passengers at different points on the Kampala-Masaka High Way. When police searched the truck, they found 14 people inside the vehicle.

“When we interrogated the suspects, they informed police that the Lubega was taking them to Mpigi, Masaka and Mbarara and each was being charged between Shs 50,000 and Shs 100,000,” Owoyesigyire said.

He said the suspects are currently detained at Nsangi police station on charges of disobeying lawful orders and acting negligently in a manner likely to spread the virus.

Last month, the police arrested one of its own Christopher Okello for misuse of a police van. Okello was captured on a video that went viral on social media, transporting passengers to Kampala, against the presidential guidelines and ministry of Health SOPs.

And a third lockdown in Uganda is inevitable because out of 30 million people, only about one million have been completely vaccinated against COVID19 Delta.

Uganda is a country of recent that has been refusing foreign aid because of its undemocratic governance. And at the same time looks as if it badly needs lots of assistance to overcome its foreign debts and the global pandemic!
Report to administrator
0 #2 kabayekka 2021-07-20 17:14
How then is the police going to dump them in government prisons and not give them food to eat and all the SOPs that go along with the rules of living in a country under attack with COVID19 Delta?

The judges and most of the government offices have been closed and ordered only to work on land profiteering business until the end of the second lockdown!
Report to administrator