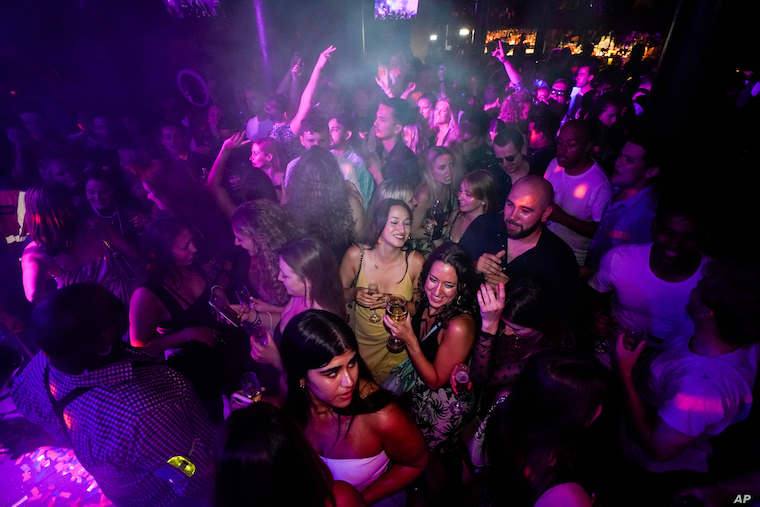 People drink on the dance floor shortly after the reopening, at The Piano Works in Farringdon, in London

Residents in Britain are celebrating the end of coronavirus lockdown restrictions Monday, a day being called Freedom Day.

The day ushered in an end to all social restrictions, like mask wearing and maintaining social distancing, which were imposed to fight the spread of Covid-19.

However, British Prime Minister Boris Johnson said Monday that beginning at the end of September, proof of vaccination will be required to enter nightclubs and other venues where large crowds gather.

"Proof of a negative test will no longer be enough," Johnson told reporters Monday in London.

Johnson is spending Freedom Day in quarantine after Britain's Health minister Sajid Javid tested positive for Covid-19. The lifting of most coronavirus restrictions in England takes place as coronavirus cases and hospitalizations are on the rise, largely driven by the delta variant of the virus, first identified in India.

Cases in Britain topped 50,000 per day last week for the first time since January. The rising case numbers have led hundreds of thousands of Britons to be told to self-isolate, which in turn has caused businesses to sound warnings about the economy.

Businesses have dubbed the event a "pingdemic" because of the large numbers of people receiving notifications on their phones from a government tracing app, telling them to self-isolate because of possible contact with an infected person.

Grocery stores, retailers, and rail operators are among the industries saying that without enough employees they will need to cut back on services.

The government said Monday it would allow workers in critical roles, including air traffic controllers and train signalers, to continue working despite being notified by the tracing app as long as the workers have been fully vaccinated. Also Monday, Britain's government said it has decided against giving Covid-19 vaccinations to most children under age 18.

"Today's advice does not recommend vaccinating under-18s without underlying health conditions at this point in time," Health secretary Javid said in a statement.

The government said some children with underlying health conditions would be eligible for the vaccination. It said fewer than 30 children with Covid-19 died in Britain since the beginning of the pandemic through March.

The coronavirus lockdown is also being lifted in Bangladesh, where the government has paused its restrictions for eight days so people can celebrate the Islamic festival Eid al-Adha.

Health experts have criticized the move, as it comes at a time when Bangladesh is facing a surge of infections caused by the more contagious delta variant.

In Thailand, officials further tightened coronavirus restrictions to try to fight a wave of infections blamed on the delta variant.

The capital Bangkok ordered the closure for two weeks of a range of businesses, including gyms, amusement parks, and museums. Restaurants in the city have already been limited to takeout service since last month.

Protesters in Bangkok clashed with police while demonstrating Sunday against the government's handling of the Covid-19 outbreak. The protests in the capital and in other locations around the country took place in defiance of a ban on public gatherings of more than five people that was recently announced by the government.

In Iran, state media reported that the capital, Tehran, and the surrounding region would be in lockdown for the next week to try to stop a surge in the coronavirus pandemic.

At the Olympics in Tokyo, another athlete tested positive Monday for Covid-19. A beach volleyball player from the Czech Republic became the latest athlete to become infected after USA teenage tennis sensation Coco Gauff tested positive. Other positive tests include two South African soccer players and an alternate for the US women's gymnastics team.

The Olympic Games were canceled last year, but the Olympic committee's decision to continue with the Games this year has received much criticism as the world grapples with the pandemic.

A total of 190.7 million global Covid-19 cases and more than 4 million deaths from the virus have been recorded since the pandemic began, according to the coronavirus resource center at Johns Hopkins University. The center's data shows that over 3.6 billion vaccines have been administered so far.

The good thing is that, almost all their vulnerable people have been fully vaccinated; so, deaths are going to be very few.

My hunch is that by December this year, everyone within the boundary of Britain will be infected and the country will achieve herd immunity and eradicate coronavirus.
Report to administrator
0 #2 kabayekka 2021-07-20 21:28
Technology will always win for humanity to live. The life of humanity by most scientists is expected to continue on between 1.5 and 4.5 billion years from now.

If the environment is not respected as technology dictates well, dramatic changes in the climate may destroy the planet's habitability.

Medical researchers or scientists who study viruses and the diseases caused by them must be thanked by such powerful countries like Britain and the USA.

They have managed to devise ways to weaken this tough virus so that it could be incorporated into a vaccine. This business of NRM government in Uganda saying that because it went into the bush war and might have all the wisdom of fighting this pandemic must stop.

Government Research stations of all kinds in Africa must be reinvented and re established so that technology of all kind is motivated!
Report to administrator
0 #3 strauss griken 2021-07-20 22:02
Banaye laba ensolo yange dammnnnnn!!!!!.