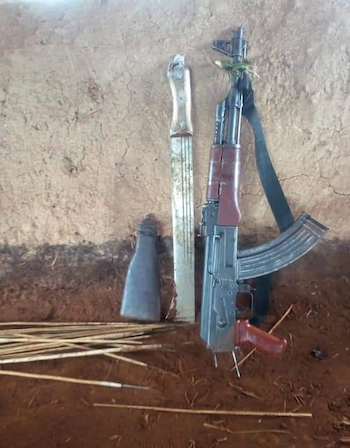 Some of the recovered items from the attack

Six suspected rebels and a Uganda People's Defence Forces (UPDF) soldier have been killed in an attack on an army detach in Zeu sub-county in the Uganda-Congo border Zombo district.

The detach located in Zeu forest was attacked by unknown gunmen on Friday morning at around 6:00 am. According to the UPDF spokesperson Brig Gen Flavia Byekwaso, 20 men disguising as forest workers entered Zombo district through Zeu forest and attacked the detach.

Byekwaso, says that the army repulsed the attack, killing six of the attackers. She adds that three UPDF soldiers sustained injuries and were airlifted to Bombo Military hospital.

She also says that one SMG gun, 11 rounds of ammunition, 12 bows and arrows and three machetes were recovered. Byekwaso says that residents in the area identified two of the dead attackers as Ugandan nationals and the four Congolese nationals hailing from Ayurpa and Miabi trading centres in Muhangi territory.

On Friday, the commander Land Forces, Lt. Gen Muhoozi Kainerugaba, tweeted that: "Yes, our unit in Zeu, Zombo District was attacked by Congolese rebels called CODECO (Cooperation for the Development of Congo). Our boys performed brilliantly and repulsed the attackers."

Francis Pimundu the LC III chairperson of Zeu sub-county, suspects the attackers could be the same group that raided a UPDF detach in Oduk village in Zombo district in March 2020.

Last year, a group of men armed with machetes, bows and arrows raided a UPDF detach in Oduk village. The attack resulted in the killing of five soldiers while nine huts were razed down and three AK-47 assault rifles looted from the army detach by the attackers.