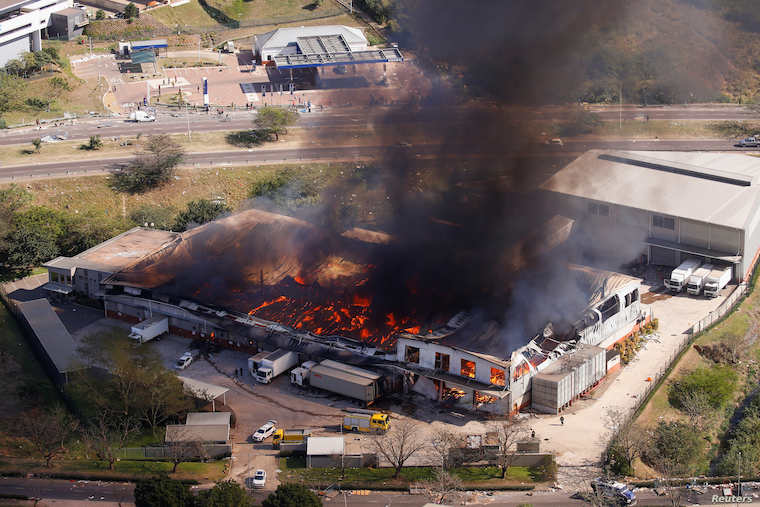 Rioting and looting in South Africa continued for a 5th day today Wednesday, raising the death toll to more than 70 as defiant protesters ignored government demands to end violence.

The unrest was sparked last week when former president Jacob Zuma began serving a 15-month jail sentence for contempt of court after he failed to attend a hearing to answer questions about corruption allegations.

Protests over Zuma’s arrest quickly evolved into mass civil unrest, the country’s worst in years. Looters continued to vandalize shopping malls, other retail outlets and businesses in the province of Gauteng, which includes the country’s largest city of Johannesburg. Bheki Celi, police minister

Security forces seemed unable to prevent the looting, which also continued in Zuma's home province, KwaZulu-Natal and spread overnight to the provinces of Mpumalanga and Northern Cape, according to police.

In the coastal city of Durban, a long line of cars formed outside warehouses full of household appliances, food and other goods. One of the warehouses was on fire, but looters kept streaming in. The leader of the opposition Democratic Alliance, John Steenhuisen, visited Durban to assess the situation.

“It’s actually quite terrifying to see the devastation, the complete destruction,” he said. “Also the despair of many of the communities here who feel completely abandoned by the security services, and who’ve been left to fend for themselves. Bodies are lying in the road. This is clearly a situation that is not under control; it’s not getting any better.”

“It’s heartbreaking to see people strolling casually with empty trolleys; when they come back, the trolleys are the size of a triple-story house and they take it to cars that are parked, as if this is normal Sunday afternoon shopping,” he said. “People carrying refrigerators on their heads; an entire cow on their shoulders. Flat screens, everywhere!”

“Everywhere, for the last 15 years, we see black graduates roaming the streets absolutely hopelessly,” he said. “Inequality has widened. Racism is at an all-time high. Public schooling has collapsed. Public healthcare continues to fail the poor and the vulnerable. What were we expecting?”

Over the past few days, the state has deployed the army in Johannesburg, but there are no soldiers visible at places that continue to be attacked and pillaged in Durban and the nearby city of Pietermaritzburg. Security officials told VOA this is because they’ve received intelligence that mobs are now planning to attack key installations, such as harbors and airports, and the army is guarding those.

Steenhuisen said this is good… but not good enough.

“My real fear is that if we don’t contain the situation here in KwaZulu-Natal, this is going to spread like wildfire around the rest of the country,” he said.

The violence has further strained the country’s hospitals that are grappling with a third wave of COVID-19 infections. The National Hospital Network, which represents 241 public hospitals, said food and supplies of oxygen and drugs were nearing depletion.

The United Nations has voiced concern that transportation disruptions caused by the riots would worsen unemployment, poverty and inequality in the country. Zuma was convicted of resisting a court order to testify in a state-backed investigation into allegations of corruption during his nine-year term as president that ended in 2018.

Zuma's lawyer argued Monday before South Africa’s Constitutional court that Zuma should have his sentence rescinded. Judges on the court said they would consider the arguments and announce their decision at a later date.

They gave angry and hungry South Africans an opportunity to do what they had been yearning for. Imagine they threatened to make South Africa ungovernable should Zuma be jailed.

Zuma cried out and said his incarceration amid the pandemic was a death sentence and none listened. Economics and sociology should have guided the judges in say passing a judgement for house arrest. lawyers all over the world should learn to mix the real truth and legal truth and not be biased with the legal truth only. Swallow the humble pie and release Zuma to save investors and even the ANC as a party
Report to administrator
-3 #3 Apollo 2021-07-15 10:59
It has nothing to do with the jailing of (former) President Zuma. "It is the economy; Stupid".

It will as well happen in other Countries and Uganda cannot count itself an exception. It is related to the very bad performance of economies due to the Covid Pandemic. It is a side effect.
Report to administrator
0 #4 Kalibbala 2021-07-15 18:32
Mohale said the county is now paying for the ruling African National Congress party’s continued protection of corrupt and incompetent leaders...Yes Zuma has to remain in Prison for Life!

This is Exactly what is bound to Happen to the Notorious Robbers Movement(NRM) in Uganda for Looting our resources and Backing Ruto of Kenya whereby Ugandans are dying of Hunger and Covid related diseases ! The way the Cookie crumbles..
Report to administrator
-1 #5 Wainanchi 2021-07-15 20:58
@ Kalibala..you are sick to the roots of your soul.
Freedom for Jacob Zuma now!!!
Report to administrator
0 #6 Musi 2021-07-15 21:48
So in black Africa you can bring chaos and death to an otherwise peaceful and stable country by arresting a thief (declared by court and incarcerated)????

Africans in South Africa, why dont you for once stop and think whether Nelson Mandela's sacrifice was a great price he paid or it was a very funny joke!!!!???
Report to administrator