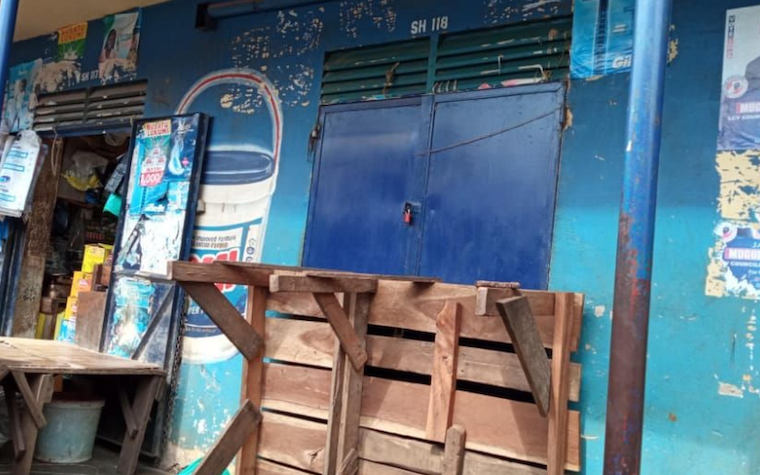 Hadija Nakyanzi's shop where she was found dead

A female vendor operating in Nakawa market in Kampala has been found dead inside her shop.

Hadija Nakyanzi, was today Wednesday found dead in a kneeling position inside her shop, SH118. Nakyanzi's colleagues were shocked to find her dead when they went to pick their merchandise from her shop at around 5 am.

Usually, the vendors would unlock the shop doors from the outside and let the deceased push from the inside to open. However, the vendors say that when they opened the door and called out Nakyanzi to push the door as usual, there was no response, prompting them to force the door open.

Joseph Sanyi, who owns a stall close to Nakyanzi's shop, says that he last saw the deceased on Tuesday evening. She reportedly looked fine and only complained of some pain on the hand after receiving her second Covid-19 jab.

Sanyi says Nakyanzi has been working in the market for more than seven years but only acquired this particular shop about two months ago. Previously, Nakyanzi worked in the fruits section selling watermelon. Amina Namatovu, who also owns a stall near Nakyanzi's shop, says that she left Nankyazi in the market last evening without any visible sign of illness.

Nakawa market chairman, Joseph Mudasi, says that he last saw the deceased at around 7 pm when they were making their night rounds in the market as vendors closed their shops to sleep.

The deputy Kampala Metropolitan police spokesperson, Luke Owoyesigyire, says police has not yet established the cause of her death. He, however, says that one of the deceased's relatives informed them that she had diabetes and hypertension.