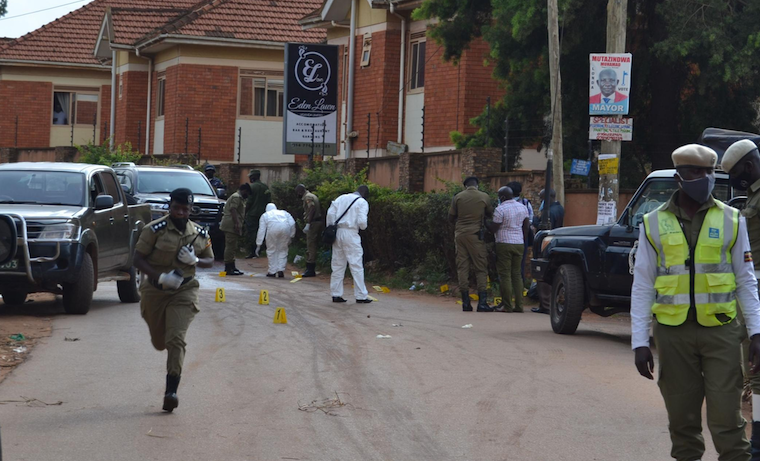 The eight suspects who were arrested in relation to the shooting of Works minister Gen Edward Katumba Wamala have also been linked to 14 other previous murders.

In the aftermath, the joint security team comprising personnel from the Chieftaincy of Military Intelligence (CMI), Crime Intelligence and Joint Anti-Terrorism Taskforce (JATT) supervised by deputy Inspector General of Police, Maj Gen Paul Lokech launched a hunt for the attackers.

Lokech said today in a statement said that they have now identified the 12th suspect Huzaifa Wampa alias Kanaabe, who has been pinned as the person who fired bullets on the left side of Katumba’s vehicle whilst riding on a motorcycle with his colleague, Kamada Walusimbi alias Mudinka who was charged last week.

Security says Wampa was arrested from a hideout near Kalule trading centre, in Luwero district yesterday. Police spokesperson, Fred Enanga quoting Lokech, said Wampa is a member of the infamous Bodaboda 2010 which became synonymous with the grabbing motorcycle riders who were not their members, extorting money from their victims as well as subjecting them to excruciating torture.

“An immediate thorough search was conducted at his known premises, and the motorcycle Bajaj Boxer, red in colour, registration number UEO 375, which was used during the attack was recovered. Other relevant exhibits recovered include a hoodie that he used to cover his head, an assortment of jackets, gloves, and warm suits,” reads Lokech's statement.

According to Lokech, the suspects have also been linked to the murder of Maj Muhammad Kiggundu and his bodyguard Sgt Stephen Mukasa on November 26, 2016, at Masanafu trading centre in Lubaga division, and the killing of AIGP Andrew Felix Kaweesi alongside his bodyguard Cpl Kenneth Erau and driver Cpl Godfrey Mambewa on March 17, 2017.

They are also linked to the shooting to death of SPC Hussein Mubiru and SPC Moses Karungi on September 18, 2017, at Kalerwe market, the robbery at Nansana Cheap General Hardware shop in Nansana where four people Frank Anania, Amim Bugembe, Jummy Atukuru and Frank Abaho were killed on May 29, 2019.

What has been their gain for all these jobs so efficiently accomplished? And how are the targets chosen?

Who chooses the victims? All of them appear to be stragglers, strugglers and dead enders. From their looks or even the places they call homes it does not appear like they materially gained much from their exploits, Is somebody else as puzzled as I am?
Report to administrator
+1 #3 PaulM 2021-07-14 07:56
So why did Kayihura arrest other suspects? Can we say Kayihura has his suspects and Lokech has is?

Or is it that the real killers are no longer needed as they failed in their mission to kill Gen. Katumba?
Report to administrator
0 #4 Apollo 2021-07-14 10:38
Boda Boda 2010, a vigilante outfit with deep state links, created to eliminate enemies of the state.

Trained by SFC and Police in assassinations and torture. Responsible for heinous methods of torture and death while operating as quasi state operatives under JJAT and several state outfits including Flying squad.

Always invited to handle 'enemies' of the state in several safe houses and the dungeon at Kireka which has resulted in irreparable damage to victims' private parts and even death.
Report to administrator
0 #5 Kalibbala 2021-07-14 21:05
FAILED STATE Kabisa!! Question : Why are All these so called Assassins Muslims!!!

What is their Motive to Hunt and Kill high profile Persons? This Shows Where Special Branch could have answered all these queries instead of a Somali War Criminal who used to sell Bullets and Guns to Al Shabaab!!

Loketch Stop taking Ugandans for Granted!NOBODY BUYS THIS CRAP!!Everybody knows that Rwabwogo and The Dead First Family are behind All these Killings!!. Time will tell even after your Demise!! Your Grand Children will pay for This !! Watch this Space..
Report to administrator