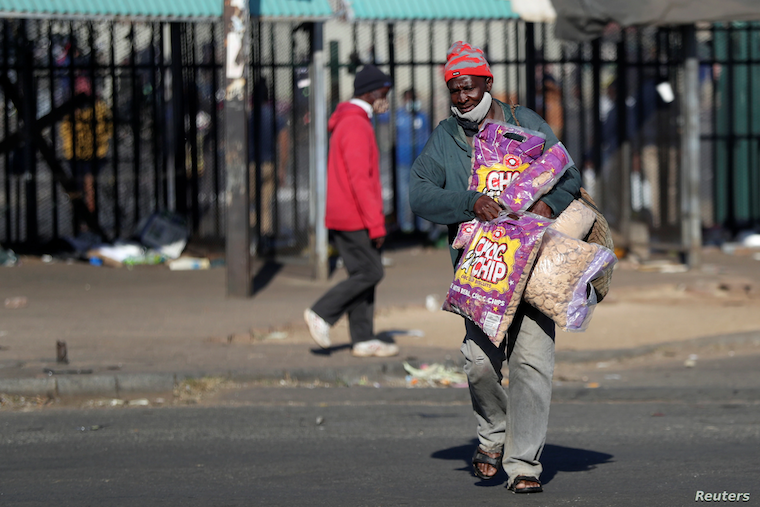 A looter walking away with biscuits

Six people have been killed in South Africa today Monday as the army moved in to help overwhelmed police to quell rioting and looting.

The rioters are demanding the release of former President Jacob Zuma who reported to a prison facility last week. Police said at least 219 people have been arrested in connection to riots and looting in Gauteng and KwaZulu-Natal.

Zuma reported to a prison facility in his home province of KwaZulu-Natal last week to begin serving a 15-month sentence on contempt of court charges after he failed to testify before a special inquiry looking into wide-ranging allegations of official corruption during his nine years in office, which ended in 2018. Today court began hearing an appeal launched by Zuma on his lengthy prison sentence.

His lawyers are also arguing that he will be at risk of catching Covid-19 while imprisoned. Zuma has denied the allegation and refused to participate in the inquiry that began during his final weeks in office.

According to Reuters, Zuma's lawyers asked the court to release the 79-year-old former leader partly on the grounds that the Constitutional court improperly imposed the sentence in his absence.

Protests spread from KwaZulu-Natal into the country's main economic hub of Johannesburg Sunday, with several shops looted, and a section of the major M2 highway closed as some protests turned violent. Reuters said television footage showed a mall ablaze in Pietermaritzburg in KwaZulu-Natal.

South Africa President Cyril Ramaphosa in a televised address said the state will not allow the looting of shops and supermarkets to continue more so as the country struggles to recover from lockdown effects.

A blood banks center in Durban was vandalized. A similar fate befell funeral homes with coffins were set on fire or vandalized, leading to the president of the National Funeral Practitioners of South Africa, Muzi Hlengwa to announce the suspension of services, saying it was too risky for their staff.

Zuma, a prominent anti-apartheid fighter, remains popular, despite the allegations of corruption.

0 #1 Wainanchi 2021-07-13 01:45
Didn't I call Freedom for Zuma??? Was it worth putting Za to jail and cause havoc in South Africa
If the greatest son of Africa Mandela is alive he would givevtidats leaders of South Africa good lesson

Freedom for Jacob Zuma!! Noooow!!
Report to administrator
0 #4 Wainanchi 2021-07-14 04:11
And the numbers are piling up.! What was more important shaky evidence and accusations of huge kisses of human life