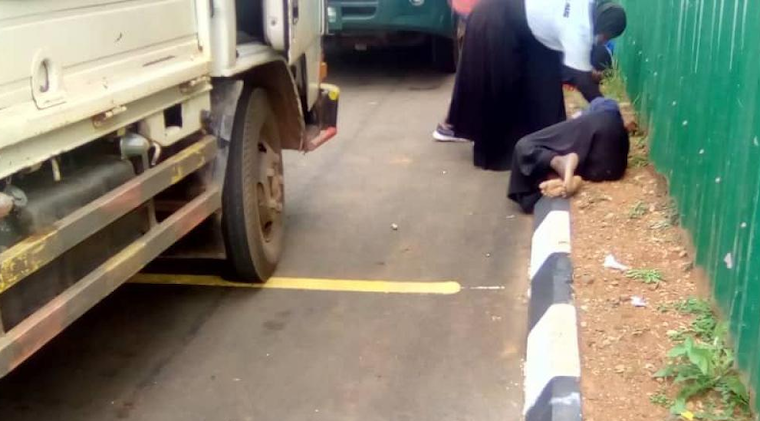 Some of the migrant workers that were removed from the plane

The migrant workers all under Premier Recruitment Ltd, had already boarded but were asked to disembark from the plane that was scheduled to depart at 11 am. The all-female workers were traveling to Saudi Arabia for domestic labour.
A security officer identified as Prima Kalungi reportedly approached the airline crew and said the workers must disembark from the plane because they had presented fake Covid-19 vaccination cards and therefore couldn't be allowed to leave the country.

Saudi Arabia requires arriving passengers to present a negative PCR Covid-19 test certificate and must be fully vaccinated against Covid-19. As a result, the migrant workers were returned to the company's head office in Kampala.
They left the airport after 5 pm. The company's agents at the airport, airport health officers, and health workers from Naguru Friendship hospital who vaccinated the intending travelers on July 2, have been asked to record statements at the Aviation police station.

Meanwhile, the ministry of Health has exempted migrant workers who have flights on Sunday from being re-tested. This development comes after the Uganda Association of External Recruitment Agencies (UERA) pleaded that many travellers would miss their flights scheduled for 11 am and 3 pm on Sunday if they have to retake Covid-19 tests as had been ordered by the ministry.

Recently, Dr Diana Atwine, the permanent secretary of the ministry of Health said the ministry will start re-testing all labour export workers a day before they depart the country. She said the measures would take effect on July 11.

Atwine explained that Uganda has been blacklisted internationally over fake Covid-19 test results presented by travellers. Emmanuel Ainebyoona, the spokesperson at the ministry of Health, says migrant workers will be retested at Hotel Africana, Kampala, and those who test negative will thereafter be cleared to travel. He said their results would be released within 4 hours.
Meanwhile, some of the labour companies say that it is becoming more difficult for migrant workers to leave the country.
"Sometimes it is the Covid-19 test certificates. Other times it is vaccination cards, So it is no longer a sure deal that your girls or boys will fly," said an official.

They estimate that the total cost on flying a single migrant worker has increased from Shs 3 million to over Shs 4 million due to Covid-19 travel restrictions.

Ronald Mwebaze, a booking agent for one of the labour companies, says airlines have also increased their air ticket prices due to high demand, particularly after Saudi Arabia banned flights from Cairo and Addis Ababa.
Only Qatar Airways and Tarco Airlines are currently carrying migrant workers to the Middle East. The air ticket prices range between $560 and $900, down from an average of $500.

+3 #1 ugthinker 2021-07-12 17:34
is hotel africana now a testing centre?
I hope guests are happy to stay at a testing centre!
I love Uganda
Report to administrator
+3 #2 WADADA rogers 2021-07-12 18:47
There is nothing authentic in this country, everything needs a second and third verification to be sure
Report to administrator
+1 #3 Loveuganda 2021-07-12 21:33
Not surprising. That's Uganda for you. If they can vaccinate 800 people with fake Covid-19 vaccination what about testing. It's laughable.
Report to administrator
0 #4 kabayekka 2021-07-12 22:04
One cannot forget the corruption of the first lockdown in Uganda when after getting the COVID19 test the medical staff directed the travelers to proceed the next day to the airport for embarkment to fly to Europe.

The results would be received and verified on phone in a few hours time. The results never arrived.

The passengers were refused to check in. Extra cash was paid for a new test and a fine paid to the airline. The extra cost was 250 pounds on each passenger!
Report to administrator