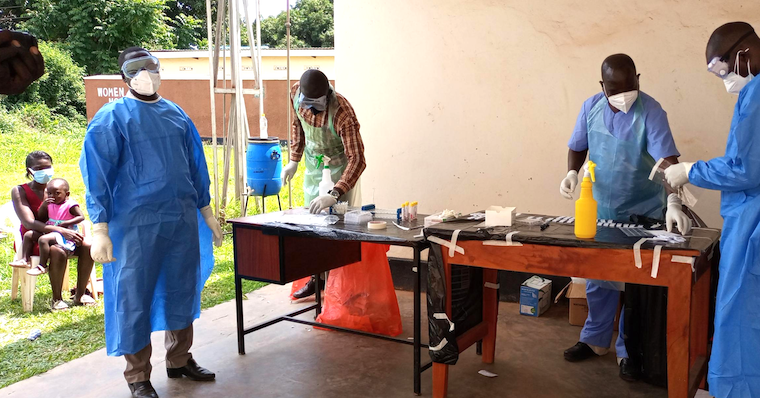 A number of health workers claim to have received less money than expected in unpaid risk allowances.

The health workers deployed in the Covid-19 treatment units (CTU) had taken months without receiving their allowances. Last week, a number of health workers received the payment through mobile money instead of their respective bank accounts as it was in 2020. The government committed to pay each health worker in CTU an allowance of Shs 80,000 for each day of work.

However, the health workers received only about 70 per cent of the expected pay. A health worker attached to the CTU at Soroti Regional Referral hospital says that she expected Shs 1,680,000 for the 21 days she worked for in May and June but only received Shs 1,175,000 on Friday on her mobile money account.

“I received the money but not satisfied with the amount sent. The ministry has paid me less and no one is explaining why the money was deducted," the medic said.

URN has since learnt that deductions of the allowances did not affect Soroti-based medics alone. Medical workers and volunteers at Entebbe Regional Referral hospital are equally unhappy that their risk allowances were taxed at a rate of 30 per cent.

One of the nurses at Entebbe hospital says that she worked for 20 days from February to April and was expecting at least Shs 1.6 million but received only Shs 560,000 on Wednesday when the ministry paid the risk allowances for 100 medics at the hospital.

She is puzzled because it implies that she worked for only 10 days in three months, considering that the risk allowance is Shs 56,000 per day after taxation. A medical doctor in the same unit also expected Shs 1.6 million but only received Shs 1.2 million for the 20 days he spent in the ward. All the medics attached to CTU who talked with our reporter said that their allowances had been deducted.

"There is poor communication in this hospital. First, the allowances were not paid for a long time. Secondly, deductions were made without our knowledge, and thirdly, the number of days worked is either less or more for some of us," a medical doctor said at Entebbe.

Some of the workers especially volunteers are losing morale at work. They say that if the issue of payment of their allowances is not resolved then they will abandon the job, which they note is very risky.

Dr Michael Muwanga, director of Soroti hospital was not in office when our reporter reached to seek his comments on the matter. He neither picked nor returned our calls when contacted on phone.

Emmanuel Ainebyoona, the ministry of Health communications officer, said that they are aware of the deductions but referred our reporter to the ministry of Finance and Uganda Revenue Authority (URA).

“We have raised it with the ministry of Finance and URA why they are taxing health workers’ allowances. I will need to find out how much tax has been levied on the allowances. For now, URA is in better position to respond to you on this matter," he said on phone.

Ian Muhimbise Rumanyika, the acting assistant commissioner in charge of public and corporate affairs at URA did not deny or acknowledge taxing the allowances when contacted on phone.

“You are raising a very serious matter. Send your concerns to my email so that I can respond to you officially," he said.

Rumanyika, however, only responded with the income tax rates applicable to resident individuals, which indicates that any monthly income exceeding Shs 410,000 is charged 30 per cent tax.

Now that any monthly income exceeding Shillings 410,000/- is charged 30 per cent tax, well any one who has studied a bit of accounts can see what is going wrong.

It is very clear that those who are determined to enjoy the tax payers money so that they can grow very rich, are determined to collect tax revenue despite the brutal attacks of COVID Delta pandemic.
Report to administrator
+2 #2 Webz 2021-07-12 16:16
medical workers do indeed risk their lives attending to patients suffering from very highly infectious diseases.

Please, give them what is actually due to them.

Indeed anyone who could be in charge , give their money!!!! Lives of Ugandans are in their hands!!!! They are the front line workers taking the proverbial first bullet!!!